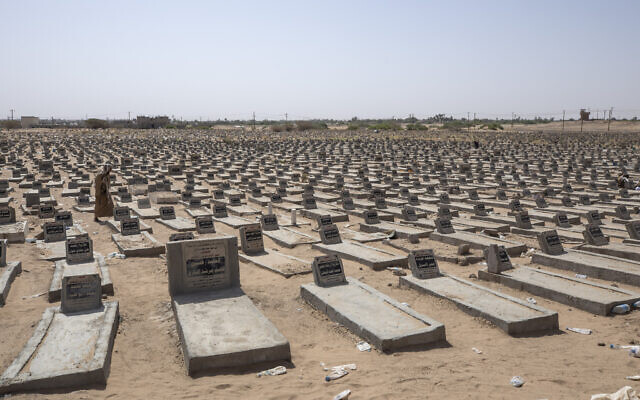 Cutting off humanitarian aid and halting movement of its 37,000 people, rebels aim to take power in the energy-rich city of Marib and complete their control of the country’s north

By Ahmed Al-Haj and Samy Magdy

The Times of Israel (17.10.2021) – https://bit.ly/3B1zM5W – Yemen’s rebels continued their weeks-long blockade of a district in the central province of Marib, cutting off humanitarian aid and halting movement of its 37,000 people, officials and UN aid workers said Sunday.

The Iran-backed Houthi rebels have advanced in the district of Abdiya south of the city of Marib in recent weeks, forcing troops of the internationally recognized government to retreat, military officials from both sides said.

The attack on Abdiya is part of the Houthis’ offensive to capture the government-held city of Marib, which the rebels have been trying to seize for years. They intensified their offensive in February, apparently emboldened by a decision by US President Joe Biden’s administration to end support to the Saudi-led coalition. However, they have faced stiff resistance from government and tribal forces aided by the coalition.

Yemen has been engulfed in a civil war since 2014, when the Houthis captured the capital, Sanaa, and forced President Abed Rabbo Mansour Hadi and his internationally recognized government to flee to the south, and then later to Saudi Arabia. A Saudi-led coalition entered the war the next year to try to restore the government to power. The war has deteriorated largely into a stalemate and spawned the world’s worst humanitarian crisis.

Thousands of fighters, mostly Houthis, have been killed in clashes and airstrikes around the city of Marib. The Houthis usually attack with waves of fighters charging government lines, thereby becoming easy targets in the open desert for coalition warplanes.

Children recruited by the Houthis are among those killed in the fighting. Placards with photos of child soldiers are commonplace on the streets in rebel-held areas, including the capital, Sanaa.

Dozens of civilians, including women and children as young as 2 years old, have also been killed in Houthi attacks on Marib city, using ballistic missiles and explosive-laden drones.

The rebels want to wrestle the energy-rich Marib from the government to complete their control of Yemen’s north, a move that would strengthen their position in any future negotiations to end the devastating conflict. They have so far defied repeated international calls for a nationwide cease-fire and engagement in negotiations to settle the conflict.

Two UN aid workers said the Houthis have blocked humanitarian aid to the district and restricted people’s movement there for around three weeks. They said several thousand people have been displaced amid indiscriminate shelling and missile attacks on residential buildings and infrastructure in Abdiya.

The blockade also prevented the transfer of wounded and other patients out of the district, the workers said, speaking on condition of anonymity because they were not authorized to brief media.

On Friday, a ballistic missile hit the Ali Abdel-Mughni Hospital, the main health facility in Abdiya that provides urgent medical care to the district’s people, said the Doctors Without Borders humanitarian organization.

The rebels entered the district’s center, but fierce fighting has remained in several areas amid heavy coalition airstrikes, said military officials from both sides, who spoke on condition of anonymity because they were not authorized to brief media.

The Saudi-led coalition said it launched dozens of airstrikes on the Houthis to stop their advances in the district.

In a phone call Saturday with Tim Lenderking, the US special envoy for Yemen, al-Aradah called for the international community to make “bold decisions to designate this militia as a terrorist group and prosecute its leaders as war criminals.”

Mohammed Abdel-Salam, the rebels’ chief negotiator and spokesman, claimed that the rebels were battling militants linked to al-Qaida and the Islamic State group. He also claimed that humanitarian corridors were available in Abdiya, “but the UN is not serious in finding humanitarian solutions.”

Abdel-Salam did not offer evidence supporting his claim and did not respond to phone calls seeking comment.

US State Department spokesman Ned Price on Saturday condemned the Houthis’ escalation in Marib, which he said “demonstrates a flagrant disregard for the safety of civilians.”