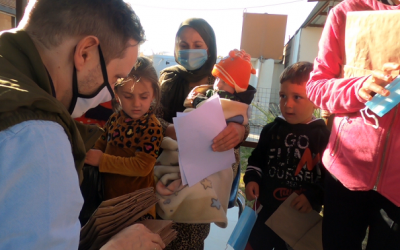 By Tristan Azbej, State Secretary of the Prime Minister’s Office for the Aid of Persecuted Christians and for the Hungary Helps Program

HRWF (26.04.2021) – Human Rights Without Frontiers is re-publishing a part of this 10-page article which is one of the contributions to the Budapest Report on Christian Persecution 2020. The full article can be read here, pp 17-27.

Since its establishment in 2016, the State Secretariat of the Prime Minister’s Office for the Aid of Persecuted Christians and the Implementation of the Hungary Helps Program has distributed 13.4 billion HUF (about 43 million USD) for various projects which supported local communities in 21 countries. These funds helped at least 100,000 people to either stay in their homeland or to return there.

Christian youth, who are often excluded from higher education in their home countries, to study in Hungarian colleges and universities and then use the skills they learned in Hungary at home. Young scholars from three continents are eligible for this scholarship which is awarded in collaboration with several church partners.

Projects implemented with Hungarian funding have directly contributed to the improvement of 13 out of the 17 UN Sustainable Development Goals and have been selected according to the humanitarian principles as defined by OCHA (humanity, neutrality, impartiality, independence). In 2020, Hungary continued to work internationally for joint action because too much political correctness can often hide the true extent of the suffering of Christian communities. Thus, the Government of Hungary responded actively to meet Christians’ urgent requests for help and provide real assistance to local communities.

An example of Hungary’s active solidarity is the reconstruction of the Iraqi Christian settlement of Tell Askuf, where St George’s Church, five schools, a local kindergarten and nearly 1,000 demolished or damaged residential properties were rebuilt between 2017 and 2018.

In 2020, several further projects were launched or implemented in aid of persecuted Christians around the world, following the rationale of the Hungarian model.

The Hungarian Government intends to respond to the multifaceted challenges of the growing persecution of Christians in Africa by supporting similarly complex projects. In 2020, in Kenya we launched four different support plans that exemplify Hungary’s diverse approaches to assistance. Project proposals prepared by the Archdiocese of Nyer include the establishment of a youth centre, the development of the educational infrastructure of St Paul Seminary, the construction of a new annexe to an existing dormitory, and the development of the existing infrastructure in King Christ Seminary. A project proposal from Tangaza Catholic University wants to develop peace building training in the border counties of Kenya through interfaith dialogue. Projects designed by the St Joseph the Worker Catholic Church in Nairobi include several sub-tasks like setting up a shelter in Westlands County for survivors of gender-based violence, providing academic and vocational scholarships and assist 209 women and girls in urban farming. Finally, the Northern Rangelands Trust (NRT) projects support the establishment of basic health care facilities in the Biliqo Bulesa nature reserve and a few other infrastructure development activities.

The coronavirus situation has pushed hundreds of fragile communities to the brink of starvation, including thousands of Christian families. In response to an urgent request, the Hungarian Government provide emergency assistance to the suffering Armenian Apostolic and other Christian communities in Lebanon and Pakistan. The Hungarian Government also provided 1 million Euros as emergency funding to the Maronite Catholic Church in Lebanon in the aftermath of the Beirut port explosion, so that they can save lives, carry out relief efforts and rebuild the damaged infrastructure. This donation reached Lebanon within two days.

The pandemic has led to mass job losses in Palestine and Jordan. As a result, 12,456 students in 38 schools operated by the Latin Patriarchate of Jerusalem are unable to pay their tuition fees, which creates such a huge deficit in the budget of these schools that it threatens the future of the affected institutions. The total financial loss amounts to more than 7 million USD. Urgent action is needed to save these schools, which will support the survival of local Christian communities as well.

In March 2020, illegal immigrants on Lesbos damaged several chapels, including the local church of St George. As the Greek community in Hungary maintains close ties with the motherland, the National Council of Greeks in Hungary and the Parliamentary Advocate of the Greek Minority asked the Hungarian Government for a 10 million HUF contribution donation for the restoration of these churches. By supporting this project, the Hungarian Government contributed to the preservation of universal Christian culture and values. Hungarian support also enabled the implementation of other projects throughout the year. For example, Hungarian donations enabled the successful completion of the construction of the “The First Miracle of the Lord” School Centre in Kana, Galilee. The State Secretariat also assisted the activities of the Roads of Success, an organisation that collects and processes evidence of genocide perpetrated by the Islamic State.

Finally, Hungary supported the efforts of the Archdiocese of Dhakka to build housing for indigenous Adivasi Christian families.