VIETNAM: The collision of religion and the Vietnamese State 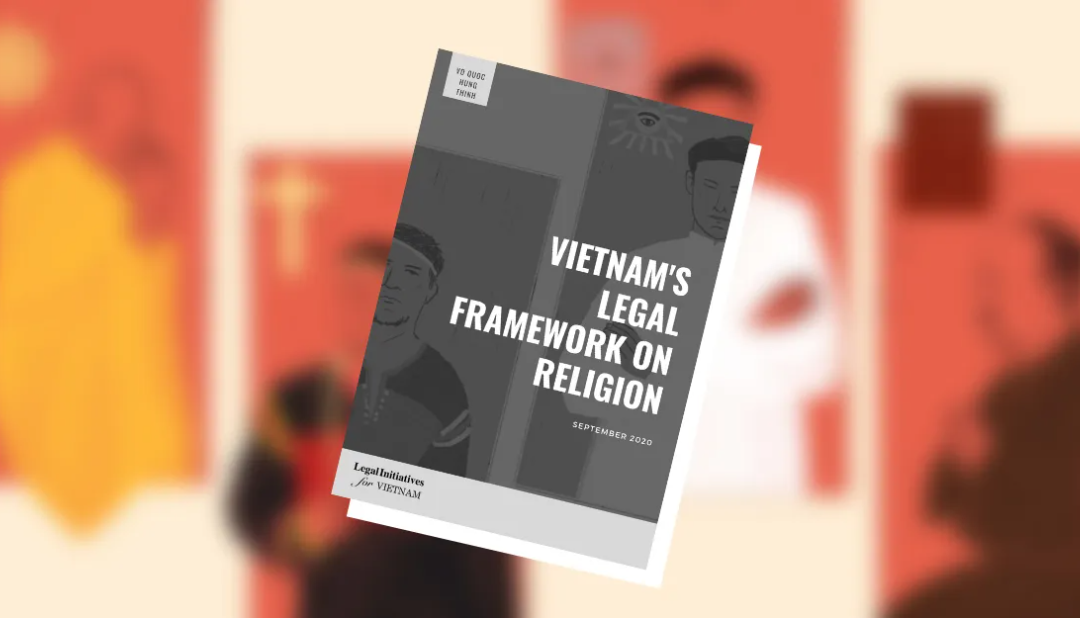 The Vietnamese (05.10.2021) – https://bit.ly/3o3q51O – The Separation of Church and State is a concept that has been accepted and promulgated by several democratic countries in the modern era. While the seeds of this idea were planted during the late Middle Ages and the Reformation, it was only during the early years of the establishment of the United States of America that this idea started to blossom.

While this concept is often construed to simply mean that religion should not intertwine with politics, the more comprehensive meaning is as follows: “it is the right to practice any faith, or to have no faith [at all].” As such, the state has no right to interject, interfere, or hinder an individual’s practice of his or her beliefs; ideally, no laws or statutes will be passed that will limit a person’s free exercise of his or her faith.

The Vietnamese Communist Party, however, has chosen to take a radically different approach towards religion.

Legal Initiatives For Vietnam (LIV) released its legal research in September 2020, penned by Vo Quoc Hung Thinh, in which the author presented the many difficulties, challenges, and hurdles that religious organizations face when they deal with the Vietnamese state.

The writer also highlights the existing institutionalized discrimination against religions in Vietnam and gives us a glimpse into how the state’s direct interference affects believers as well.

Several documents and resolutions have been passed by the VCP that perfectly illustrate its stance towards religious organizations.

Vo Quoc Hung Thinh noted in his research that in its Resolution 297/CP Concerning Policy on Religion (1976), the Vietnamese government, at least on paper, claimed to acknowledge the right of freedom of religion and supposedly guaranteed equality under the law.

However, it also emphasized, “that religions shall not be ‘exploited’ to bring harm to the Socialist State.” This resolution then states that the faithful “shall be educated to ensure the spirit of socialist patriotism” and that “ ‘[r]eactionary’ elements hiding inside religions shall be eradicated.”

This resolution seems to assume that religious organizations are going to be used to subvert state authority. And while it is possible for this to happen, this is not something specific for religion itself; any coalition or gathering of people can fulfill this role just as well or even better than a Sunday Bible Study group; to focus on religion is discriminatory and goes against the concept of equality under the law.

Vo Quoc Hung Thinh also noted in his legal research that Resolution 40 –NQ/TW, which focused on religion management in the new situation (October 1, 1981), mentioned several religions that existed in the former Republic of Vietnam (1955-1975) and discussed the “state of socialist enlightenment” among practitioners who belonged to them.

For instance, regarding the Catholic Church that existed in the former Republic of Vietnam, the current Vietnamese government believed that the followers of this religion were “vulnerable to anti-communist propaganda.”

Another example would be that of the Unified Buddhist Sangha of Vietnam (UBSV). The resolution stated that the leaders of this religion were already somewhat “re-educated” but that the party needed “to abolish UBSV and unify Buddhism in Vietnam under the supervision of the Communist Party.”

While this resolution document is quite outdated and old, through it, we can catch a glimpse of how the VCP deals with religious groups.

The Communist Party monitors both followers and spiritual leaders in Vietnam, gathers data about them, and directly interferes in the teachings and belief systems of religion. This runs contrary to the right of freedom of religion and the separation of church and state.

Vo also noted that Resolution 25 – NQ/TW, which focused on the National Central Committee on Religion Management (2003), was drafted after the Doi Moi era when Vietnam wanted to join the World Trade Organization.

This resolution, therefore, removed most of the aggressive language used in prior legislation but kept several “core principles” intact. This particular document stated that “any religion must be recognized by the State and religious activities shall be subject to [the] State’s regulations and supervision.” It also maintained that there were still “reactionary elements” hiding in various religious groups and that the government shall prepare to defeat any of them.

All three of these resolutions illustrate, that despite the passage of time, not much has changed in the way the VCP thinks about religious organizations. They are still seen as threats to the Party’s power, and as such, have to be destroyed or controlled. And despite what the VCP might claim, the Party does not respect freedom of belief nor provide these groups equal protection under the law.

For religions to be formally recognized in Vietnam, and for them to also have some semblance of protection against state forces, they have to register and be approved by the government.

Human Rights Watch reported in October 2020 that failure to do so can lead to the arrest, imprisonment, interrogation, and torture of the leaders or followers of these religions. Hence, for the sake of self-preservation, it is in their best interest to comply.

However, this process is far from convenient.

In order to be recognized, religious groups in Vietnam first need to obtain a Certificate of Religion Operation. Five years later, they then need to formally apply for official recognition. Only upon completion of these two requirements are they, at least on paper, afforded all the rights, benefits, and protections that they should have been given 10 years earlier.

This process, which is explained in detail in Vietnam’s Law on Religions and Beliefs 02/2016/QH14 (LBB), passed on November 18, 2016, is also vulnerable to abuse by the Vietnamese authorities.

LIV’s research paper also highlights the case of the religious group An Dan Dai Dao (ADDD), which was established in 1969. It is a sect of Buddhism which had a network of 14 temples and thousands of followers before 1975. After Saigon fell on April 30, 1975, the new ruling Vietnamese Communist Party accused ADDD of working with the Central Intelligence Agency.

ADDD was also not granted registration, which led to its properties being taken away by the government; their followers were also forced into hiding.

In 2003, adherents tried to jumpstart their religion once more due to the perceived reforms going on in Vietnam. However, they were once again persecuted by the state.

In 2013, Phan Van Thu, the leader of ADDD, was sentenced to life imprisonment while 21 other leaders were sentenced to a collective total of 299 years in prison and 105 years of house arrest. To this day, the ADDD situation holds the record of having the highest sentence ever imposed in a political-religious case in Vietnam.

Those incarcerated are currently dealing with abuse and maltreatment, and are faced with the very real possibility of death.

In denying the ADDD sect the right to register, the Vietnamese state branded the group as criminals and treated them as such despite ADDD’s lack of involvement in any political activities.

The followers of this religion have faced persecution for more than 40 years for simply practicing their faith and holding firm to a belief they deem essential to their human existence. This situation casts a bright light on the black bleeding heart of the VCP and exposes the lengths the government is willing to go to destroy its own people.

Even state-approved religious organizations have to constantly deal with the ever-watchful eye of the VCP.

LIV research also states that these organizations are required to get the state’s permission and approval for various things such as hosting religious events whether inside or outside their designated place of worship or for something as simple as a change in leadership within their organizations.

The locations where religious structures can be built also require the state’s consent. In effect, rather than portraying strength, the VCP presents itself as being unhealthily obsessed with religious groups, their leaders, and the many people who are part of them.

This is not at all surprising; as Marx, the father of the hammer and sickle, once stated “religion is the opium of the people.”

In Communism, religion is seen as something undesirable, as something taboo, and as something that must be purged. We’ve seen this in the history of many Eastern and Central European countries when they were under the rule of the former Soviet Union.

Vietnam is going through the same motions. Yet, we’ve also seen that after the fall of the USSR, religion never truly went away.

In religion, people find hope; people find something greater than themselves that they aspire to attain, whether it may be the afterlife, heaven, nirvana, or enlightenment. In faith, they find purpose; they find direction and guidance to help them navigate the tumultuous sea of life with the company of those who choose to travel the same path.

In belief, they find freedom.

And this is what the VCP fears the most: that the people will no longer be dependent on them for subsistence and survival. They fear for a time when their countrymen start to dream or come to know of a world outside the Party’s tiny dictatorship. They fear a populace that holds another being in higher regard than the crumbling corpse of Ho Chi Minh.

The VCP fears becoming obsolete. Yet in the end, that is exactly what it fated to be.

Long after Vietnam has risen above the shackles of authoritarianism and long after it has reached a future of true and genuine democracy, the Party will be gone.

But religion will be there to stay.