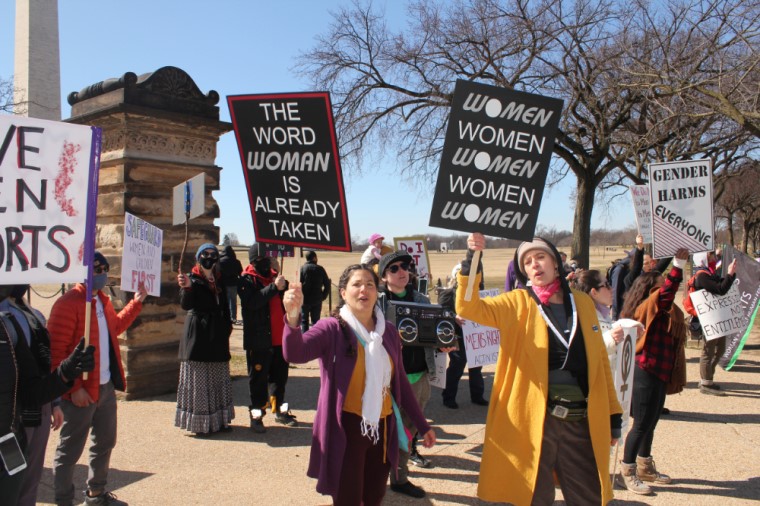 HRWF presents you hereafter an article published by Brandon Shiowalter in the Christian Post on 9 March under the title “Hundreds of women unite to protest against Biden’s transgender executive order, Equality Act”

The Christian Post (09.03.2021) – https://bit.ly/3eozApz – A diverse coalition of women’s rights campaigners numbering into the hundreds protested against the Biden administration’s executive order allowing boys who identify as female to compete in girls’ athletic competitions, among other moves to enshrine transgender policies into law.

On Monday, some 200 women hailing from all across the United States descended on the nation’s capital to participate in Women Picket-DC, a nonpartisan event to protest an executive order signed by President Joe Biden on Jan. 20 that enshrined “gender identity” into federal law.

The event intentionally coincided on International Women’s Day and was held on the corner of 15th Street and Constitution Avenue adjacent to the National Mall near The Ellipse. Many held placards urging senators to reject the Equality Act, a pending update to the 1964 Civil Rights Act that would enshrine gender identity as a category into the federal legal code.

Dawn Odell, a conservative Catholic mother, traveled from Washington state to lend her voice in support of women’s rights, and to oppose social and medicalized gender-transitioning of children and trans-activist initiatives like Drag Queen Story Hour at libraries and in school curricula.

“There are so many ways where kids are being taken advantage of, and completely and irreparably altered forever, and their lives ruined by this transgender movement. It’s awful,” Odell said in an interview with The Christian Post.

“Whenever a man can come in and take a spot on a woman’s team or on a podium, you’re depriving women of their rights. Men are bigger, stronger, taller. They can destroy women in sports. It’s totally unfair,” she said.

Charlie Rae of Raleigh, North Carolina, the writing lead for the Women Picket-DC rally, said the central issue is that the public views gender identity as a human rights cause when it in truth assaults human rights.

“It changes our already existing structures of human rights,” Rae said. “And I think that a lot of people mean really well, and they want to protect people and implement human rights. That’s why we’re here too. But gender identity as a concept — transgenderism, the medicalization, the altering of our social policies and institutions — it doesn’t protect people.”

“We’re here because we want to protect people,” however they identify, she stressed.

The protesters’ efforts are nonpartisan because they’re rooted in “basic common sense,” Rae stressed. “And that doesn’t have a political party — to know that women are female.”

Lead organizer Courtney Piper, who was one of the four speakers at the event, told CP that the narrative of self-declared gender identity has been systematically rolled out in the last 15-20 years and asserted that its propaganda is fueled by massive amounts of money and has spread throughout school systems and government entities.

“The general public truly is under a mass hypnosis and deceit,” regarding this issue and others, she said.

“It’s the inverse of material reality and spiritual reality. Women are here today to expose the truth and speak truth to power,” Piper declared.

When asked what she and her fellow compatriots plan to do should the Senate vote to pass the Equality Act, which Biden has promised to sign into law, Piper said their efforts would never stop.

“If indeed it does [pass], we won’t stop fighting. We are going to continue to roll out action after action until our voices are heard and our demands are met,” she said.

In remarks before the crowd with the Washington Monument in the background, Suzanne Vierling, a psychologist from Southern California, noted that the sex-based rights of women should be in cement and not even debated, given the hard-fought gains. She drew analogies between present scourges against women to previous ones, particularly black women who were once enslaved.

“Today we have come full-circle, back to women as chattel, if we don’t fight. It doesn’t seem possible. But today, while the woman is erased as a woman in the name of the law, woman is now stretched out on a platter, stretched out for use, for profit,” she said.

Facing the White House and flanked by a participant holding a banner with a quote from the suffragist movement in the early 20th century that read: “Mr. president, how long must women wait for liberty?” Kara Dansky, a radical feminist attorney who serves on the steering committee of the U.S. chapter of the Women’s Human Rights Campaign, addressed the Biden administration, demanding that the Jan. 20 executive order be reversed.

She went on to express gratitude for a December 2019 tweet by Harry Potter series author J.K. Rowling, who voiced support for Maya Forstater, a British woman who was ousted from her job for stating opinions online about the reality of biological sex in the context of the U.K.’s Gender Recognition Act.

That short post on social media from the beloved author was a game-changer, Dansky continued. Rowling has since spoken out at considerable length about her concerns about how radical transgender ideology is diminishing women’s rights.

Dansky then quoted from Biden’s inaugural speech, in which the president spoke of the importance of rejecting a culture in which facts are manipulated and manufactured.

She continued: “Mr. president, are you willing to protect the rights, privacy, and safety of women and girls or do you stand with men who pretend to be women? The time to decide is now. Mr. president, we ask you: How long must women wait for liberty.”

“Mr. president, the jig is up. The emperor has no clothes. Women are tired of waiting for liberty. Mr. president, rescind the order.”