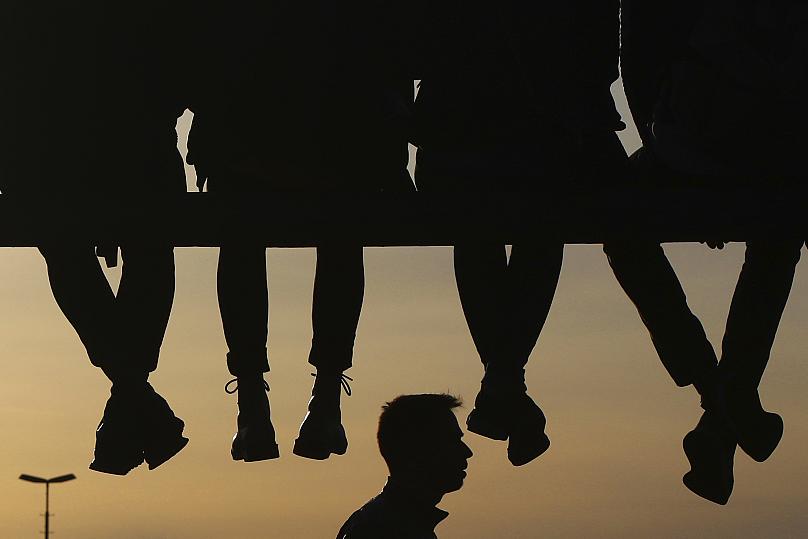 ‘There were bars on the windows’: Meet the Italian detained in UK amid post-Brexit visa confusion

Euronews (17.05.2021) – https://bit.ly/3uXEgYZ – In the arrivals hall at Heathrow airport, Giuseppe Pichierri waited for his cousin Marta to arrive.

With him was his four-year-old son, carrying a balloon and pictures he had painted to mark Marta’s arrival in London and first post-pandemic summer with her extended family.

“The last message they got was in the queue when she was waiting to go through immigration. That was the last time they heard from her.”

As Pichierri and his son waited, Marta Lomartire, a 24-year-old Italian national, was being told by Britain’s Border Force that she could not enter the UK.

“I was glad I had arrived in England,” Marta told Euronews.

“I thought my first trip would be a nice opportunity and experience, but the result was completely different.”

Marta had travelled to London to learn English and to help look after the Picherris’s children while both parents went to work. Both are NHS workers: Jennifer is a nurse, Giuseppe a consultant microbiologist.

She had spent time putting together all the documentation that she was told she needed, but was later informed this wasn’t enough. She was taken to an office where she was questioned and had her bags searched.

Marta was then taken to a detention centre and put in a room that contained three beds and had bars on the windows. A secure door that led into the room was left open.

She had been told that she would be deported back to Italy the following day.

“I was allowed one phone call before my phone and my personal effects were taken,” she said.

‘There would be outrage if this was UK nationals’

Dozens of EU nationals have been stopped at the border in recent weeks due to misunderstandings about new entry requirements brought into force after Brexit.

These include citizens from Germany, Greece, Italy, Romania, Portugal, Bulgaria and Spain, travelling to the UK for job interviews or to take up summer employment.

The European Commission told Euronews it had raised the issue with the UK and other member states.

For European officials, the detention and deportation of EU nationals is “grossly disproportionate”.

“There would rightly be outrage if this was reciprocated for UK nationals,” said Dacian Ciolos, the president of Renew Europe, the EU’s liberal political group.

Meanwhile, the3million, a campaign organisation for EU citizens in the UK, told Euronews that far from being routine, detention and deportation should be a last resort.

“These draconian measures are also hugely worrying for EU citizens who are caught up in the huge backlog of settled status applications – many are concerned they might not be able to prove their right to be in the UK at the border,” the group said.

Araniya Kogulathas is a barrister and legal manager of the NGO Bail for Immigration Detainees, a charity that challenges immigration detention in the UK. She told Euronews that there is a lack of clarity about whether or not people need to apply for visas before entering the United Kingdom.

“If you look at the UK government’s website, you can access the immigration rules and they are very clear that you can attend job interviews or attend work conferences,” Kogulathas added that, “the nationals coming to do precisely those things are being detained at the border and being refused entry because they’re being told that they need to apply for work visas. There’s inconsistency and a lack of clarity, and it’s resulting in people being deprived that deprived of their liberty.”

Marta’s family were concerned about changes due to Brexit prior to her arrival and said they had tried their very best to gather the correct visa information.

Jennifer said she had been assured by her local MP that Marta could enter the country for six months as an au pair.

“I honestly believed there must be a visa. He said there wasn’t anything,” she said.

“Italy, as far as I understood, had tried to come up with a reciprocal agreement.”

According to the UK government website, an au pair is not considered an employee if they meet the majority of conditions listed in a checklist.

These include stipulations such as having a signed letter of invitation from the host family, learning about British culture and language, and conducting 30 hours a week of light housework and childcare.

But the website also says that an au pair cannot work on a visitor visa if visiting the UK for six months or fewer.

It is also calling for urgent support for its campaign to reopen a specific route for au pairs – or face “a childcare crisis”.

Marta’s family say her experience was “an appalling way to treat anyone” – but that it is not an isolated case.

“This is the way the immigration services have been treating people for decades, but now it’s happening to Europeans,” Jennifer said.

“I feel a bit responsible being the British member of the family. When it first happened, we thought it must be a mistake. We thought we were unlucky and that it was a terrible error.

“We held our hands up, it was a genuine mistake. But it just got more and more surreal.”

It was 3 am by the time that Marta was taken to the detention centre, and when she arrived there she believed she had been taken to prison.

“The thing that sticks with me is that she’s our family member, our children love her and were looking forward to spending time with her; they spent the whole of last summer with her,” Jennifer said.

Responding to concerns about visa issues for au pairs, the UK’s Home Office has said: “EU citizens are our friends and neighbours and we want them to remain, which is why they have until 30 June to apply for the EU Settlement Scheme if they were resident in the UK before 31 December 2020.

“For those who were not resident before this date, as the public expects, we require evidence of an individual’s right to live and work in the UK.”

Back in Italy, Marta says it is only a 50/50 chance that she will try to go to the UK again.

“I am terrified because it was not a beautiful experience,” she said.

“I certainly did not feel welcomed, but I do not feel like absolutely excluding an opportunity there, at the moment, the idea of returning is a no.

“I know I have done absolutely nothing wrong. I also have my cousins there so I would just love to be able to go back to spend time with them.