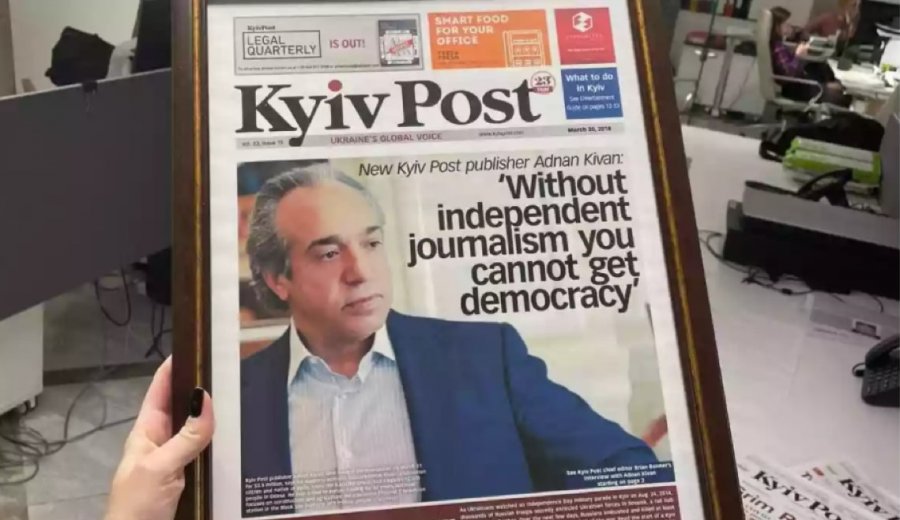 KHRPG (09.11.2021) – https://bit.ly/3DaE2ls – Ukraine’s only major English-language newspaper and a vital source of independent journalism has suddenly stopped publishing, with its staff reporting that they arrived at work on 8 November to learn that they had been fired.  While the allegation made by Sevhil Musayeva, Chief Editor of Ukrainska Pravda, that pressure had been brought to bear on the newspaper’s owner from the Office of President Volodymyr Zelensky cannot be verified, the now former Kyiv Post employees’ statement makes it clear that there had been concerns over recent weeks regarding Kivan’s plans for the newspaper, and the threat to editorial independence that these were believed to pose.  The team are blunt in calling the closure “an act of vengeance”.

Adrian Kivan, Odesa businessman and, since 2018, owner of Kyiv Post, was quoted on the paper’s website that it was closing immediately “for a short time”.  He expressed the hope that it would shortly reopen “bigger and better”.

Shortly afterwards, members of what had been until Monday morning the Kyiv Post team, reported, for example, that “Kyiv Post has been killed” and shared the following statement. 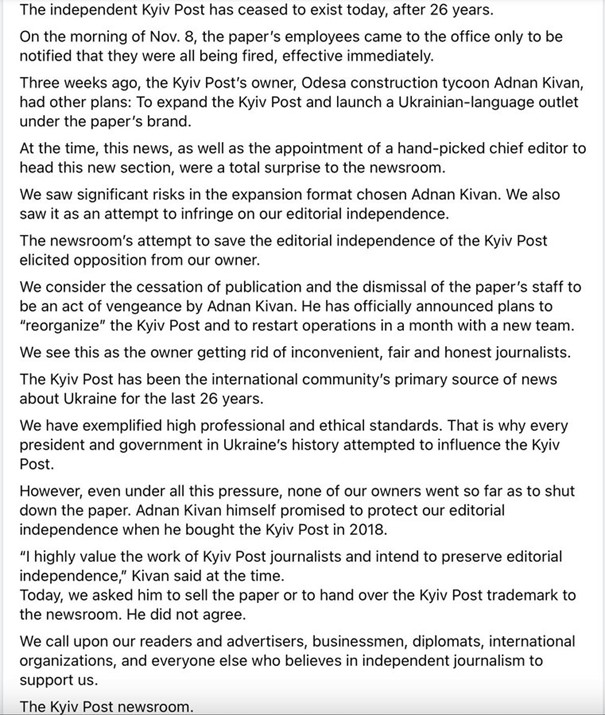 This is indeed not the first time that Kyiv Post’s editorial policy had come under attack.  In April 2011, during the presidency of Viktor Yanukovych, an attempt was made by the previous owner of Kyiv Post, Mohammad Zahoor, to dismiss the Chief Editor, Brian Bonner.  His team vehemently protested and, in the end, won out with Bonner reinstated and a joint statement issued by Zahoor and the editorial team.

This time, the entire editorial team has been dismissed, leaving a huge gap in available information sources for those who do not read Ukrainian or Russian, and serious concern as to the motives for such an abrupt and radical break.

In her comment on the developments, Sevhil Musayeva wrote the following, after quoting Kivan’s official statement:

“Unofficially, the problems in the editorial office began several weeks ago. As far as I’m aware, they are linked to pressure on Kivan from the Office of the President.

To understand the situation, Kyiv Post is the main source of information about Ukraine for embassies, international organizations and expats.

A source that wrote about Wagnergate [the failure, or alleged sabotage, of plans by Ukraine’s Security Service to seize Russian Wagner Unit mercenaries accused of crimes in occupied Donbas], the scandal over offshore companies, over the anti-corruption body and reforms in general. That clearly was not to somebody’s liking, as the owner was given to understand…

It was useless to try to influence Brian and his team. He is known for his principled position and over 25 years has succeeded in retaining independent editorial policy. They therefore decided to simply get rid of him.

Considering that there are attempts now to prevent opposition deputies from going on work trips abroad, and the Office [of the President] has drawn up its own weekly digest, in which it plans to report on ‘victories’, this is a more than logical step, and one in the style of early Yanukovych.

Only, without wanting to disillusion the authors of such a wonderful plan, it is simply impossible in 2021 to hide something.  Diplomats and European politicians understand what is happening.  Over the last couple of days alone, I have received several requests for information from MEPs and ambassadors regarding pressure on journalists in Ukraine.

Now, unfortunately, the example of Kyiv Post must be added to these.”

As mentioned, there are no independent sources to confirm Musayeva’s allegations regarding pressure on Kyiv Post’s owner.  There have, however, been similar complaints about pressure from the Office of the President on the editorial team of Suspilne, or Ukraine’s TV-1.   On 19 October, Myroslava Barchuk accused the Head of the Office of the President, Andriy Yermak of such pressure on her Suspilne talk show.  She asserted, for example, that Yermak had complained that the program broadcast the previous day had not been balanced and demanded the presence of MPs from ‘Servant of the People’, the party associated with President Zelensky.  She added that there had long been such attempts to force Servant of the People’s pressure on her program. There was a formal statement of protest from Suspilne on 20 October, with this backed by leading Ukrainian media organizations.

Kyiv Post, under Chief Editor Brian Bonner, has provided an invaluable source of independent and reliable information about Ukraine at a time when the country has faced huge challenges and has been under attack, first from a corrupt regime, then from an external aggressor.  Perhaps Adrian Kivan really does have some ambitious plans for a multilingual publication under the same name and simply wants to begin with a new team, but the brutal manner in which the Kyiv Post editorial team and Bonner himself have been dismissed and publication suddenly stopped cannot fail to cause concern.

After the recent ban of several other opposition media – Strana, 112International TV, ZIK TV and News One – it is now the turn of an independent media outlet to be silenced.