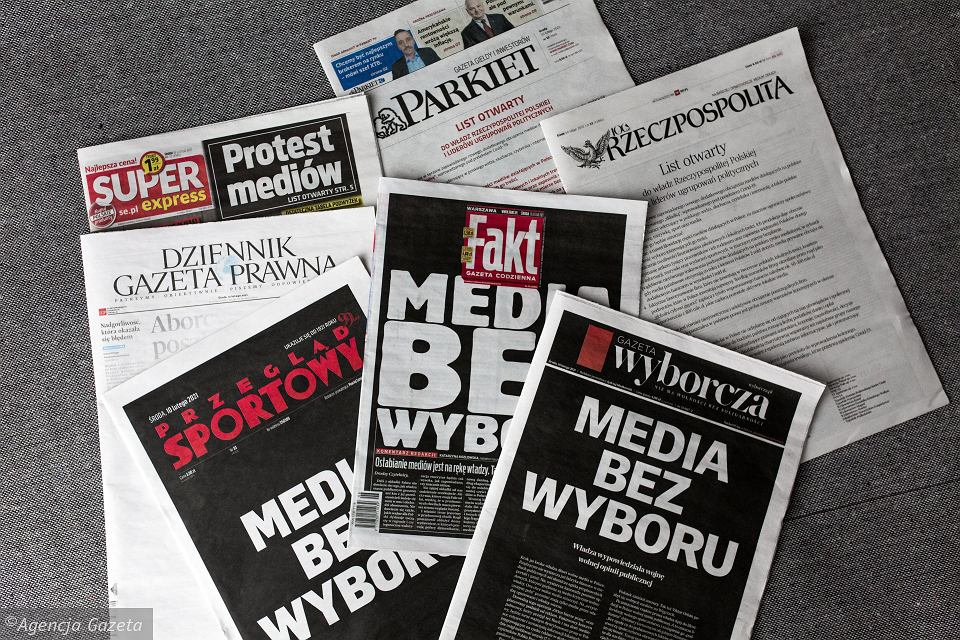 The assault on free media is only one of the many fronts opened by the ruling camp in its war on Polish democracy and civil society. If my words might seem harsh, it is because we are past the point of cautious euphemisms. The attack on media freedom in Poland clears the way for an all-out assault on the very values on which the European Union was founded.

Today, the owl’s shriek comes from the illiberal regimes that aim to dismantle the democratic institutions within the European Union. Poland is a prime example. I am the editor-in-chief of Gazeta Wyborcza. I have served in this capacity for thirty-two years now, since 1989, the year when Poland went through a peaceful and negotiated transition from a communist dictatorship to a democratic regime based on free elections. Gazeta Wyborcza was an important symbol of this monumental change – the first independent daily from Elbe to Vladivostok, free from censorship and political pressure. Other countries in the region followed in our footsteps.

Gazeta Wyborcza came to life as the voice of the Polish democratic opposition during the electoral campaign of 1989. We stood for fundamental values: media freedom, civic rights, independent judiciary, economic reform and market liberalization, transition from a one-party dictatorship to parliamentary democracy, and from a society ruled by fear to society based on freedom.

Our success went hand-in-hand with Poland’s economic and political transformation. After many decades of authoritarianism, Poles finally got to experience what it meant to live in a free country founded upon the rule of law. Now, however, our victory from three decades ago is under assault.

Poland, together with a number of other countries in Europe, is witnessing a creeping authoritarian coup. The rule of law is being transformed into the rule of coterie of a single party. The Constitutional Tribunal, prosecutor’s office, police, and secret services were all turned into loyal subjects serving at the pleasure of the ruling party that ironically calls itself “Law and Justice”. Public media broadcasters and have been transformed into tools of shameless propaganda similar to that employed by Putin in Russia and Erdogan in Turkey. Independent media outlets are cast as enemies of the state and face hateful attacks that mirror those uttered on numerous occasions by Donald Trump. We are treated as enemies for the simple reason that we are independent and have the courage to speak truth to power.

Let us once again turn to Shakespeare, this time to the famous monologue of Horatio from Hamlet:

So shall you hear

Of carnal, bloody, and unnatural acts,

Of deaths put on by cunning and forced cause,

And, in this upshot, purposes mistook

Fall’n on th’ inventors’ heads. All this can I

The purpose behind the machinations of the ruling camp is clear to see. It wants to ensure that no one is allowed to bring light to “unnatural acts”. It needs everything and everyone to operate as the rulers intend.

It is for this reason that the governing majority is meticulously, step by step, dismantling the safety valves of our democratic order. Mátyás Rákosi, the Hungarian communist dictator known as “little Stalin”, called it the salami tactics – destroying the dissent one thin slice at a time.

It bears repeating – independent media are called as enemies of the regime and openly treated as such. Polish Prime Minister Mateusz Morawiecki shamelessly observed that 80 percent of the Polish media “belongs to our enemies”. What he meant was that these media enjoy even a shred of editorial freedom.

Jarosław Kaczyński’s regime regularly launches vicious attacks against media that dare to criticize the ruling camp – Gazeta Wyborcza among them. Government officials, members of the ruling camp and the state-owned companies bring never-ending lawsuits against journalists who investigate instances of abuse of power, demanding massive legal damages and removal of articles that incriminate them. Those strategic lawsuits against public participation, known as SLAPPs, are meant to intimidate and silence independent media. At Gazeta Wyborcza, we have faced more than 50 SLAPP suits already. A week does not go by without a new lawsuit against us.

After Law and Justice came to power in 2015, state institutions and companies controlled by the ruling camp terminated all their subscriptions of media critical of the government and pulled out all advertisements – including those related to public tenders and public service announcements – from these outlets. This party line was not altered even during the current pandemic, when reaching out to the broadest possible audience was of critical importance for public health. Meanwhile, state coffers are wide open for media that happily espoused official propaganda. Over the last five years, they received more than 1.3 bn euros in advertising revenue from public and state-owned entities alone.

Critical journalists are called out and intimidated by these state-controlled propaganda outlets. They rile up their followers by accusing independent reporters of serving foreign regimes and their interests. Such a narrative is meant to deprive us of our credibility.

As independent media, we are fortunate to have the support of our readers, our listeners, and our viewers. The ruling camp cannot abide this. We uncovered several attempts at media invigilation orchestrated by the secret services. Journalists working for independent media have been harassed and teargassed by the police while they were reporting on anti-government protests.

Over the last years, the ruling camp kept ominously referring to the need to take over “enemy” media so that they finally serve “Polish” interests. It has now delivering on this threat. In December, the state-owned oil company PKN Orlen, the largest in Central and Eastern Europe by market capitalization, purchased Polska Press, which controls a large majority of the regional media market in Poland. The CEO of Orlen joined the Law and Justice party in 2009 and had virtually no executive-level management experience before 2016. He owes his meteoric career rise exclusively to being a loyal servant of Jarosław Kaczyński. The acquisition of Polska Press by Orlen is eerily reminiscent of Gazprom’s takeover of NTW television broadcaster in 2001 at the request of the Kremlin. Its purpose is to dismantle editorial independence in Poland, not to preserve it.

Orlen also recently acquired the second largest press distributor and newsstands chain in Poland. What we are witnessing is a blatant attempt to muzzle free media.

Law and Justice-controlled state antitrust agency immediately greenlit the merger between Orlen and Polska Press despite the risks it posed to the competitive equilibrium on the regional media market. The same agency took two years to investigate the acquisition of private radio broadcaster EuroZet by Agora, the owner of Gazeta Wyborcza, before abruptly blocking the transaction while the antitrust proceedings were still ongoing. Both decisions were politically motivated and aimed at strengthening government propaganda at the expense of independent media.

The recent proposal of a new media tax on advertising turnover is a clear attempt to financially bleed private outlets suffering amid the economic downturn caused by the Covid-19 pandemic and force them into the arms of the ruling camp. If it succeeds, Poland will join the ranks of Russia and Hungary – countries with virtually no independent media.

The fight for the future of the European Union

The assault on free media is only one of the many fronts opened by the ruling camp in its war on Polish democracy and civil society. After the current regime took control over the prosecutor’s office, the Constitutional Tribunal and the Supreme Court, Poland is no longer governed by the rule of law. We are being transformed into a single-party state and thus we are becoming the “sick man of the European community”. The struggle that is taking place in Poland is a battle over the future of the European Union. Other EU member states do not lack politicians who see Kaczyński’s Poland as an inspiration, not as a warning.

If my words might seem harsh, it is because we are past the point of cautious euphemisms. The attack on media freedom in Poland clears the way for an all-out assault on the very values on which the European Union was founded.

The aggressive rhetoric employed by the governments in Warsaw and Budapest is not too dissimilar from the narrative espoused by radical proponents of Brexit; it would fit in well with the authoritarian mob assaulting the Capitol on the 5th of January. Words can cut as deep as knives; they can serve to harass and persecute people; they can lead to bloodshed. Those who attack independent media hope to murder language as a tool for finding truth. We can see it in how they construct false narratives about Polish history, Polish culture, and Polish tradition. History showed us what happens to states and nations who do not stand up to fight for their democracies. Without those willing to defend them, democracies are always lost.

We are facing many more challenges ahead. Polish authorities are limiting the freedom of academic research and plan to rewrite schoolbooks. They continue to normalize and glorify hate speech rooted in xenophobia and homophobia, to block freedom of access to public information, to create ever new hurdles for NGOs that do not toe the party line. By standing for the most important of all European values – freedom – in Poland, you are defending the European Union, the project and promise that remains the beacon of hope for all of us.