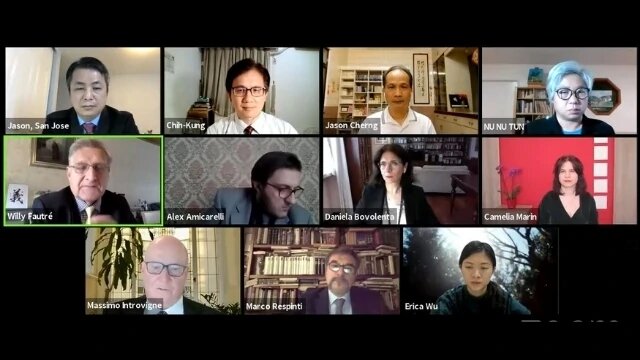 Presentation at the 24 May webinar co-organized by CESNUR and HRWF. It was part of the events organized by NGOs for the 2021 United Nations World Day, which was commemorated on May 21.

HRWF (31.05.2021) – In 2001, UNESCO adopted the Universal Declaration on Cultural Diversity.  In December 2002, the UN General Assembly, in its resolution 57/249, declared 21 May to be the World Day for Cultural Diversity for Dialogue and Development.

In 2015, the Second Committee of the UN General Assembly unanimously adopted the resolution on Culture and Sustainable Development A/C.2/70/L.59, affirming culture’s contribution to the three dimensions of sustainable development, acknowledging further the natural and cultural diversity of the world, and recognizing that cultures and civilizations can contribute to, and are crucial enablers of, sustainable development.

This day that we are commemorating provides us with an opportunity to deepen our understanding of the values of cultural diversity, to promote human rights and fundamental freedoms.

The case of Tai Ji Men which is part of the cultural diversity in Taiwan is emblematic in this regard.  Tai Ji Men has never evaded taxes, a fact that has been confirmed by the Taiwan Supreme Court, and the defendants who were detained have received national compensation for their unlawful imprisonment. However, for a quarter of a century, this minority movement has been heavily persecuted by the National Taxation Bureau. Tai Ji Men has always refused to pay undue taxes or to accept a so-called friendly settlement, which would have been an admission of guilt and more importantly a treason of its moral principles and against its conscience.

Taxation of the income of individuals, associations and companies is a mechanism that is necessary in a democratic society to guarantee the common good, to finance public and social services, to support investments and innovation. However, taxation must be fair and transparent if the government wants the citizens to abide by its rules.

When confidence in the taxation system is lost because of corruption, cheating or abuse, the rule of law and democracy are in danger and society must react.

This is the situation that Tai Ji Men has painfully experienced and against which it has decided to react. Even though the amount of time, effort, and money they have put into this worthy cause far exceeds the amount of illegal taxes levied against them, they still have the courage to fight for justice and righteousness, not only for themselves, but also for the sake of the country’s justice and people’s happiness.

The Tai Ji Men case has drawn the attention of a number of well-known experts and scholars, who established the Tax and Legal Reform League in 2016 with the following objectives to safeguard the well-being of the Taiwanese society:

Some initiators of the Tax and Legal Reform League are worth mentioning:

The Tax and Legal Reform League does not only correct the mismanagement of tax collection by the National Taxation Bureau (NTB) and the abuse of its disproportionate power but it also makes constructive proposals to remedy it. Here are the main points of its roadmap which includes the compliance with the existing fiscal rules considered to be fair and the regulations that need to be reformed, completed or abolished.

The roadmap of the Tax and Legal Reform League

The taxation should have a clear legal basis and strictly comply with legal implementation procedures and the Constitution.

The taxpayers should first receive a taxation proposal that they can contest with arguments before it is officially issued.

In case of disagreement, the burden of proof should be shifted from the taxpayers to the tax authorities.

If the tax authorities cannot prove that a taxpayer has intentionally evaded taxes, they should not impose a penalty.

The Petitions and Appeals Committee of the Ministry of Finance, which deals with complaints of taxpayers, should be composed of independent experts and scholars in order to be fair and impartial.

To protect the people’s right to appeal a decision, the rule that “half of the tax must be paid or guaranteed before filing an appeal, otherwise the appeal will be referred to the enforcement agency” and “restricting people from leaving the country, detaining them, and taking them into custody without a court decision” should all be abolished.

If the tax amount cannot be determined within five years from the issuance of the original tax bill, it should not be allowed to be reassessed.

The Taxpayer Rights Protection Act should be reviewed and amended by experts and scholars. The reason is that it might seem to protect taxpayers’ rights, but in fact it is full of loopholes. One of them is the lack of independence and impartiality in the selection of the taxpayer’s Ombudsman and tax judges in addition to unreasonable tax deadlines.

Last but not least, the system of tax bonuses granted to officers of the National Taxation Bureau and the Enforcement Agency, which are proportional to amounts collected through taxes and auctions, can lead to undue fiscal and judicial harassment by the tax collection officers and should be repealed. Besides, the bonus system has no legal basis.

Through their quest for justice for victims of the National Taxation Bureau, the Tax and Legal Reform League and Tai Ji Men contribute to the protection of cultural diversity and moral development of society in Taiwan. We should all learn from Tai Ji Men and the Tax and Legal Reform League and work together with conscience to preserve the world’s cultural diversity, so that the world will become a better place to live and everyone will enjoy happiness and prosperity.