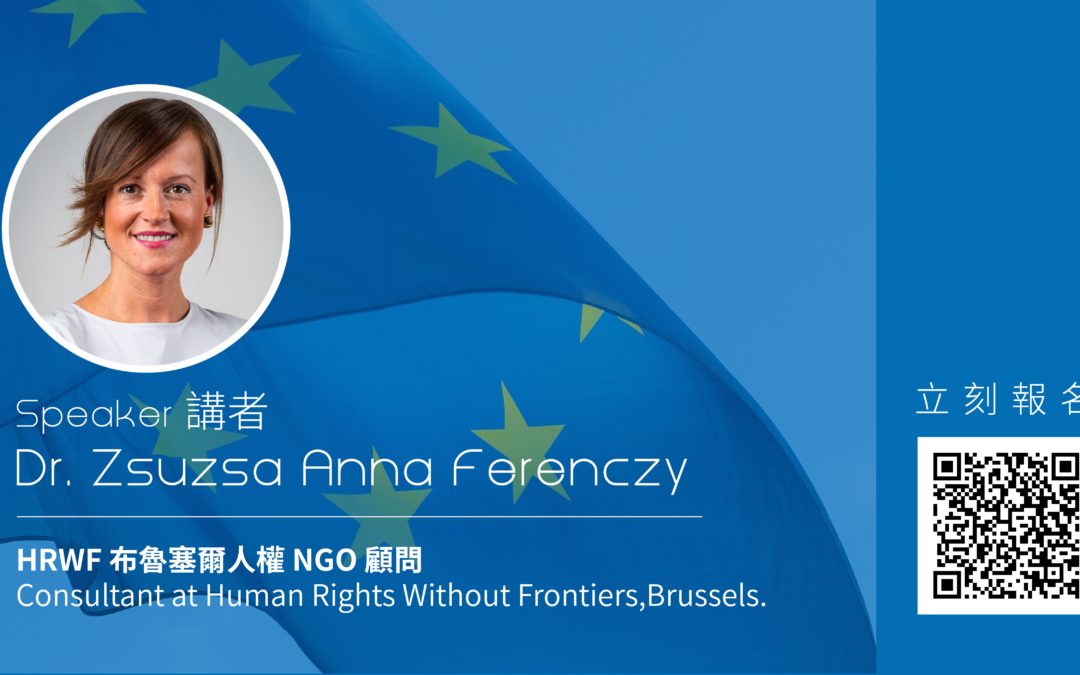 Human rights, the EU and Taiwan: Time to upgrade ties

HRWF (23.08.2021) – EU-Taiwan relations, the effectiveness of the EU as a normative power and Taiwan’s journey to advance human rights in a hostile environment were issues discussed by a panel of experts and academics in a webinar hosted by Taiwan Digital Diplomacy Association (TDDA) on August 20. TDDA is a non-governmental organization which promotes public diplomacy through digital platforms.

The seminar, entitled “European Perspectives on Taiwan from a Human Rights Angle” contributed to ongoing reflections on how to upgrade EU-Taiwan relations with human rights at the centre. Within a global context dominated by geopolitical rivalry leaving human rights increasingly marginalized, the discussion presented timely and constructive reflections and recommendations for the EU and Taiwan to strengthen their cooperation.

The panel also discussed developments in the campaign “Taiwan My Name My Right”, which seeks legal remedies against the Norwegian government’s decision to register Taiwanese citizens as Chinese on their residence documentation. The group claims that the government in Oslo has violated their right to personal identity protected by Article 8 of the European Convention on Human Rights. In May this year they filed a complaint to the European Court of Human Rights. At the end of July, the Court declared the case inadmissible.

In her presentation, Dr. Ferenczy elaborated on the notion of ‘European Normative Power’, and its relevance in the context of the debate on Europe’s ‘geopolitical’ ambitions. She presented a comprehensive overview of the EU’s existing cooperation with Taiwan in the field of human rights and democracy, as well as the emerging dynamics in EU-China relations. Finally, Dr. Ferenczy stressed that the EU needs a strategic debate on its relations with Taiwan in the context of the ongoing reflections on its China policy and its broader foreign policy ambitions. Concerning ways to support “Taiwan My Name My Right”, Dr. Ferenczy stressed the importance of awareness raising inside Europe; NGOs, such as HRWF, are valuable platforms in this regard, she stressed.

In 2019, EU High Representative Josep Borrell said that as “we see the rebirth of geostrategic competition between China, Russia and the US […] the EU has the option of becoming a player, a true geostrategic actor, or being mostly the playground”. In 2020, HR Borrell also noted that the question of how the EU should deal with a China increasingly pursuing a strategy of global influence is an issue of fundamental importance for the future of the block.

These statements are indicative of the reflections inside the EU on how to equip itself to be able to address the long list of emerging global challenges; self-perception remains a key element in these reflections, Dr. Ferenczy noted. HR Borrell’s statements have also inspired extensive academic and policy debate on the role and relevance of the EU as an international actor, and the kind of relationship it wants to maintain with China. Considering the EU’s multi-layered governance system and internal fragmentation, coordination in its Common Foreign and Security Policy has always been a challenge. This is the context that has shaped EU-China policy, where a conceptual shift is now unfolding.

The EU recently labeled China a “systemic rival”, indicative of a new reality in bilateral ties. This shift should serve as a strategic opportunity for Brussels and EU member states to rethink their approach to Taiwan and expand bilateral cooperation, Dr. Ferenczy stressed.

“The EU and Taiwan are like-minded partners. Their relationship is grounded in a normative convergence. This can’t be said of the EU’s relationship with China, burdened by a normative divergence”, Dr. Ferenczy stressed.

The European Parliament (EP) has remained the most vocal EU institution on China, advocating for closer cooperation with Taiwan. The fact that the EP is currently working on a stand-alone report on Taiwan is indicative of an increased level of awareness and willingness to expand ties with Taiwan, as a technologically advanced economy and thriving democracy. Taipei has also expressed in increased cooperation, in addition to its ongoing efforts to strengthen ties with democracies in the Indo-Pacific. In the words of Taiwan’s Foreign Minister, Taiwan is ready to embrace the Indo-Pacific. “Together we can realize a free, open, inclusive and resilient Indo-Pacific”, he said recently.

Keeping the above in mind, Dr. Ferenczy concluded that there is international consensus that China is a threat to Taiwan’s security and a source of regional anxiety. The EU has its own interests to protect in the Taiwan Strait. Brussels and the EU member states must therefore be ready to reassess the EU’s overall interests as a ‘geopolitical’ actor in the Indo-Pacific. At the same time, they must be willing to consider Taiwan on its own merit and support its democratic government.

For a sustainable and constructive way forward for a ‘geopolitical’ EU, the EU must develop a better understanding of China’s political and economic system, as well as its structural weaknesses and strengths. Taiwan can be a valuable partner in these efforts. Going forward, internal unity inside the EU, as well as international cooperation among democracies are vital for the EU’s international relevance, for the future of Taiwan and that of democracy in the face of an authoritarian advance in the world.