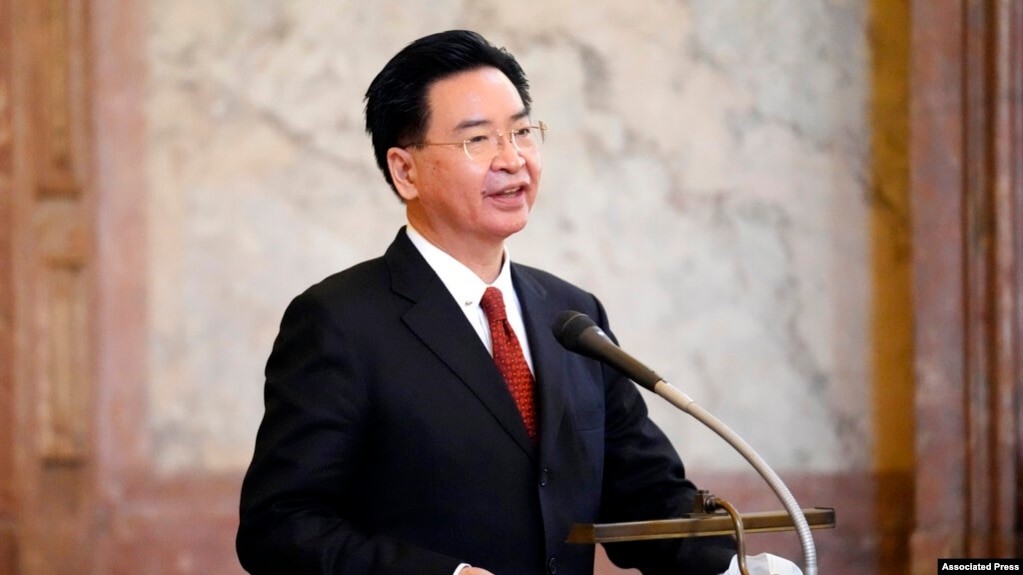 HRWF Note: HRWF consultant on China, Dr Zsuzsa-Anna Ferenczy (currently based in Taiwan), was interviewed by Voice of America (See below) TVBS News (See at 0’42” and 2’52”) and another Taiwanese TV Channel (See at 1’08” and 1’33”)

VOA (31.10.2021) – https://bit.ly/2Ybt4g3 – As Taiwan’s Foreign Affairs Minister Joseph Wu made an unprecedented trip to Brussels on Friday, it remained unclear whether Europe will face repercussions from China for displaying closer ties with the self-ruled East Asian island claimed by China.

China previously imposed sanctions on EU parliamentarians after the EU sanctioned Chinese officials linked to Xinjiang, a far western Chinese province where millions of ethnic minority Muslims have been detained in internment camps.

Now, as Wu’s travels take him to the Czech Republic, Slovakia, Lithuania and Belgium, it is possible China could use the same tactics again, according to Bonnie Glaser, director of the Asia Program at the German Marshall Fund of the U.S.

“Beijing could impose sanctions on EU officials who met with Taiwan’s Foreign Minister Joseph Wu. It could also postpone a planned meeting between Xi Jinping and European Council President Charles Michel, and a 27+1 meeting that has been broached,” she said, referring to a summit between China and EU leaders.

Beijing regards Taiwan as a wayward province that will one day be united with the mainland. Under Xi, Beijing has taken a more aggressive policy of squeezing Taiwan out of international space and is quickly angered when its government or officials are treated as though they are independent.

After news of Wu’s trip was reported last week, Chinese Foreign Affairs Ministry spokesperson Wang Wenbin urged Europe not to “undermine the political foundation of bilateral relations” with China, according to Reuters.

Undeterred, Charlie Weimers, a Swedish member of the European Parliament and its EU-Taiwan relations rapporteur, shared updates about meeting with Wu on Twitter, as did Belgian politician Els Van Hoof, chair of the Foreign Affairs Committee in the country’s Chamber of Representatives, one of the Belgian houses of Parliament, and member of the Inter-Parliamentary Alliance on China.

While Wu has previously visited Europe, his meetings in the administrative capital of the EU are unprecedented. The trip comes as Taiwan publicizes its growing ties with EU member states such as Lithuania, the Czech Republic and Slovakia. The three countries together donated more than 850,000 doses of COVID-19 vaccine to Taiwan after earlier receiving face masks and other medical supplies donated by Taiwan.

At the same time, Europe has become more wary of China’s expansion in the Asia-Pacific region, prompting the bloc to include China as a potential security threat in its first Indo-Pacific strategy report released this year. Germany, France and the Netherlands all have separate strategies for the region as well, which include concerns about China, while NATO is also publicly discussing the Asian superpower.

“There is a tangible push for the EU to upgrade ties with Taiwan, largely shaped by the [European Parliament],” said Zsuzsa Anna Ferenczy, a doctoral research fellow at the European Union Centre in Taiwan at National Taiwan University.

The push, she added, is not for the EU to recognize Taiwanese sovereignty but instead to disconnect EU-Taiwanese cooperation from EU-China relations.

Wu called Friday for a bilateral investment deal that could see Taiwan invest more in Europe in a speech at an Inter-Parliamentary Alliance on China conference in Rome, which he attended by video link, according to Taiwanese media.

While China has major investments from Western Europe and to Serbia, Hungary and Poland, promises of large projects from China elsewhere in the Baltics, Eastern and Central Europe have not been as fruitful as some nations once hoped.

Earlier this year, Lithuania pulled out of the 17+1 regional cooperation bloc of Central and Eastern European countries, as well as Estonia and Latvia, aimed at promoting closer business ties with Beijing. China had invested on an estimated $94.7 million in Lithuania — a relatively small amount — in projects since 2015, according to findings from the Central and Eastern European Center for Asian Studies.

China halted trade with the tiny Baltic state in retaliation for its actions. China has also showcased the economic benefits of a closer relationship as seen last week in Greece, where China’s state-owned company COSCO raised its investment stake in Greece’s Piraeus Port Authority to 67%, according to Nikkei Asia.

The carrot-and-stick approach from Beijing “serves to send a message to member states who might be on the fence that there would be consequences to their ‘mistakes,'” said Ferenczy. “But it also has a domestic consideration, to show that China doesn’t allow countries, for example Lithuania, to disrespect it, but that China is generous, and its generosity is respected, for example in Greece.”

Earlier this week, however, Wu himself warned European nations to “think twice” about Chinese investments.

Part of Wu’s diplomatic pitch, RFE/RL reported, is to offer Taiwan as a small, open, and democratic alternative to Beijing’s authoritarian politics, “wolf warrior” tactics, and so-called “debt-trap diplomacy” that has become associated with Chinese investment across the world, from Africa to Central Asia.

For smaller countries with fewer strategic interests in China, there might be very little Beijing can do in retaliation — especially if the EU states back each other up. Lithuania, for example, is not expected to suffer major economic consequences from fewer economic links to China than a country like Poland or Serbia.

Some of her publications while in Taiwan

Standing up to China could help bring Lithuania, the EU and Taiwan closer together

EU approach to TW, from gratitude to support

In brief with Audrey Tang

In brief on Taiwan, EU, China

The European Union and Taiwan: time to re-conceptualize ties

The EU’s Toughening Stance on China, the Role of the EP and CAI – an Analysis

Comment: EU-Taiwan relations in the Indo-Pacific – time for an upgrade