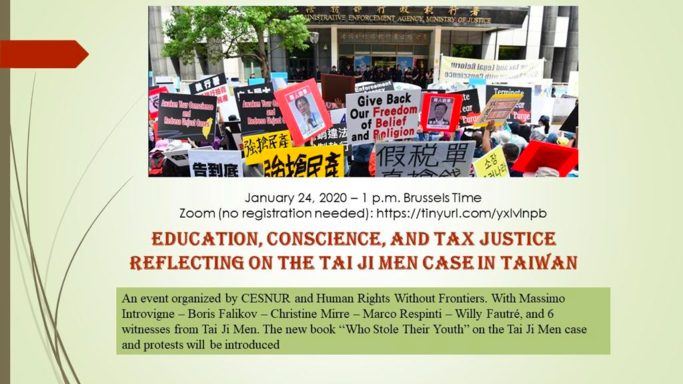 Oral presentation at a webinar co-organized by Cesnur and HRWF

HRWF (31.01.2021) – The title of this conference “Education, Conscience and Tax Justice” is quite appropriate for Tai Ji Men’s never-ending fight for Justice, and all the speakers who have preceded me have abundantly illustrated the content of the book “Who Stole Their Youth?” which has just been launched. I will not repeat or summarize what they have just said because their testimonies and analyses were sufficiently explicit. I will rather focus on the message that Tai Ji Men has sent to the world through its 24-year-long battle.

Conscience is what characterizes our human nature. Human beings are the only living beings on earth that have awareness of good and evil. This feature constantly needs to be preserved, nurtured and developed through space and time. Yet, this can only be achieved through education. Moral values are the blood that irrigates the minds of human beings. Family, school, religious and philosophical movements are the arteries and veins through which the blood of spiritual values can give oxygen to the human conscience and make it grow.

This is what Tai Ji Men has been doing for decades: teaching and training the dizi to live according to their conscience and their spiritual values, whatever the price they must pay, and never to compromise. Integrity, dignity, respect, compassion, love and peace are at the heart of their values and of their lives.

Tai Ji Men’s teachings are the blood that irrigates the souls of the dizi.

The best ambassadors of Tai Ji Men’s teachings to the outside world are the dizi because they are the living testimonies that their spiritual values can regenerate individuals and society.

However, to fight for the well-being of people also means to fight against evil forces. One of those evil forces that Tai Ji Men has been facing for two decades and a half is the National Taxation Bureau (NTB) and its ally Prosecutor Hou, nicknamed the “Judicial Rambo”.

Quite a number of Taiwanese speakers before me have already exposed the circumstances and the details of the war waged by the NTB and Prosecutor Hou against Tai Ji Men in violation of the foundations of democracy, the rule of law and human rights. Dizi have courageously testified about their sufferings for following their conscience. A book titled “Who Stole Their Youth?” has just been published. It is an invaluable source of information about the magnitude of the damage caused to Tai Ji Men and the dizi by evil forces because they chose to follow their conscience.

Fighting for Justice is the right fight.

Massimo Introvigne stressed in his introductory remarks that the followers of Tai Ji Men had learnt in the hard way that “if they did not fight for their rights themselves, nobody would do it for them,” but they have been courageously doing it. Some were not even born when the denial of justice started while others have died in the meantime, sometimes prematurely, because of the intensity of the ordeal.

Christine Mirre from the French NGO CAP/ Freedom of Conscience has shared with you the experience of four religious groups in France which were blacklisted by the French state and subsequently persecuted for years by the tax administration. All of them won their cases but the most dramatic one concerned Jehovah’s Witnesses as they had to fight for a decade in domestic courts and several more years in the European Court of Human Rights to obtain Justice: the reimbursement of 4 million EUR unduly charged by the French state.

Boris Falikov commended the dizi for fighting for Justice. From his experience in Russia, he noted that behind the persecution of minority religious or belief groups there are always anti-cult activists. He also denounced the false accusations of tax evasion routinely used by state bodies to isolate an ‘undesirable’ group from the rest of society and bully it to its destruction.

Marco Respinti stressed in his remarks introducing the roundtable that “the space reserved to freedom of religion or belief is like a no-fly zone that a state should not violate because the result is always disputable and usually bad.” In the case of Tai Ji Men, the state in Taiwan has crossed the red line with the tragic consequences that we know.

For almost 25 years, Tai Ji Men has been fighting against evil forces and has chosen not to compromise with them.

It would have been easy to pay a modest fine and hereby get rid of a burdensome and never-ending judicial battle. Tai Ji Men has refused to follow the apparently easy road and has chosen to follow its conscience. Tai Ji Men had not cheated with Taiwan’s tax administration. There was therefore no other choice than to refuse to admit any non-existing wrongdoing and any supposed guilt.

By just paying an illegal tax and a small fine,

Tai Ji Men would have recognized its alleged guilt,

it would have lied,

it would have committed perjury,

it would have denied itself,

it would have lost its face and its credibility for ever,

it would have sold its soul,

it would have offered a total victory on a golden plate to the evil forces which want to weaken and destroy it.

Tai Ji Men preferred to spend the necessary time, energy and financial means for Justice whatever the cost. Justice not only for themselves but for all those who are victims of the harassment of the tax administration.

Tai Ji Men’s battle is not only for Tai Ji Men and its dizi. It is a battle for the well-being of all the Taiwanese, for Taiwanese society and for the image of Taiwan on the international scene.

Tai Ji Men’s voice and deeds have attracted many Taiwanese experts in legal and political matters who have joined their voices to its fight for democracy, the rule of law and human rights.

Tai Ji Men’s education program raises and awakens the consciences of those who thirst for righteousness.

This conference “Education, Conscience and Tax Justice” and the book “Who Stole Their Youth” perfectly reflect the battle for Justice fought by Tai Ji Men and the dizi. In the fire of oppression, they have shown an unshakeable faith in their values and they have passed this torch to the next generation.