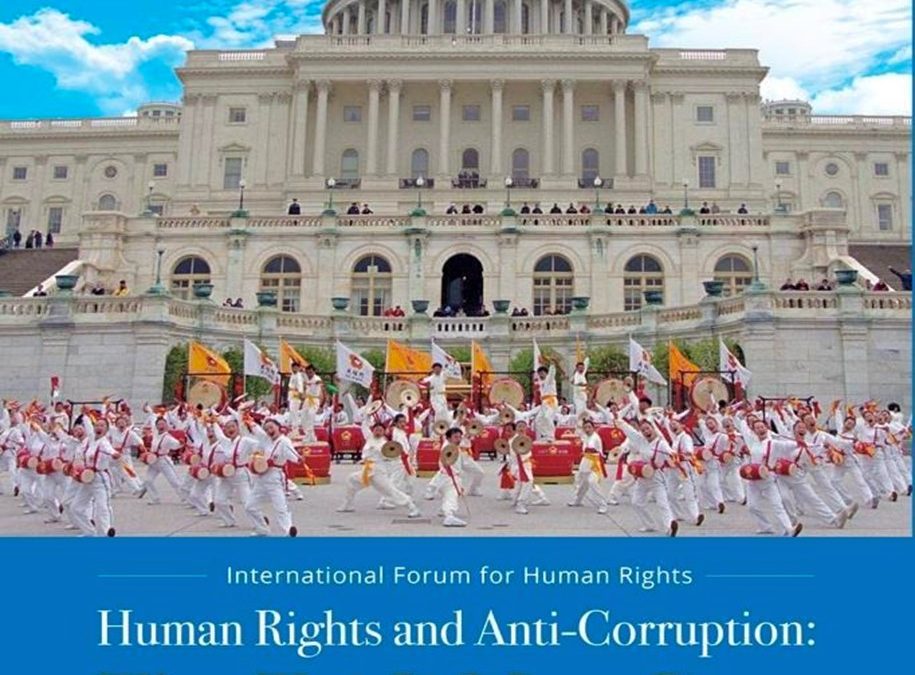 Contribution of Human Rights Without Frontiers

HRWF (12.13.2021) – On the eve of the International Anti-Corruption Day, jointly commemorated by CESNUR and Human Rights Without Frontiers in Washington DC, I will address the following issues in my presentation:

First surprise: There is no universally agreed definition of corruption, nor does the UN Convention against Corruption (UNCAC) feature one. According to a definition that is often quoted by civil society and EU institutions, corruption is ‘the abuse of (entrusted) power for private gain’.

The negative impact of corruption on human rights

Corruption is recognised as an obstacle to sustainable development in all its dimensions and has a harmful impact on human rights, such as equal access to justice, protection of fundamental freedoms and non-discrimination, especially in the case of poor and vulnerable people.

In addition, corruption ‘undermines the achievement of the Sustainable Development Goals (SDGs) and has a negative impact on peace, stability, security, the rule of law, gender equality and the environment.

The need to reinforce international efforts against corruption stems from the gravity of the issue in today’s world. All UN member states, except six of them, have already ratified the UN Convention against Corruption (UNCAC). This is the only legally binding international anti-corruption treaty, which has been in force since 2005 but various organisations point out that serious implementation gaps persist.

The UN Human Rights Council (HRC) highlights that all forms of corruption can have a serious negative impact on human rights but also the rule of law and democratic practices. Judicial corruption limits the right to a fair trial and remedy, and can encourage related abuses such as extrajudicial detention and torture. Corruption represents a big obstacle to socio-economic development, as it blocks immense resources from being used to promote socio-economic rights, such as the right to an adequate standard of living, education, or health care. Moreover, corruption, erodes the quality of governance and public trust.

How to fight against corruption

In several resolutions on the negative impact of corruption on the enjoyment of human rights, the UN Human Rights Council emphasises the importance of a preventive approach to corruption with a focus on:

The 2019 Oslo Statement prepared by over 140 experts recommended, among other things, that additional research be carried out on the impact of corruption, involving a vast quantity of assets (VQA), on global peace and security, human rights, climate and biodiversity.

The International Council on Human Rights Policy (ICHRP) – an independent expert forum – maintains that to apply the human rights framework in a legally effective way, it is necessary to distinguish whether corrupt practices violate a human right directly or indirectly or whether no causal link can in practice be established.

To better integrate a human-rights law perspective into actions against corruption, international bodies, such as the UN Human Rights Council and the UN High Commissioner for Human Rights, have advocated a human rights-based approach  to corruption. This approach would be complementary to the criminal law approach, which treats corruption as a criminal offence. It would focus on the individual victims of corruption on prevention and remedy. According to the UNODC, ‘the criminal justice approach assumes that the State (and the public it represents) has been harmed by acts of corruption committed by individuals.

The human rights-based approach focuses attention on how the State has breached its obligations towards the public by failing to protect it from corruption, and on the need for the provision of remedies by the State’.

Conversely, respect for human rights in general, and in particular freedom of expression, assembly and association and the right to information can have a strong preventive effect on corruption. According to the World Bank governance indicators (2019), countries that perform well with regard to political participation rights while also ensuring freedom of expression, of association and of the media tend also to do well in combatting corruption.

I will first come back to the definition of corruption largely used by civil society and EU institutions: corruption is ‘the abuse of (entrusted) power for private gain’.

It is obvious that in Taiwan there are abuses by the administrative power for private gain.

What is at stake here is the system of bonuses which viciously leads to the over-collection of taxes and even the fabrication of tax evasion taxes. This is an abuse of power for private financial gain.

If the tax income collected for this year does not meet the expected amount, the staff member’s performance score will be low, and he or she will not receive a tax collection bonus.

As a result, individuals in high positions will encourage their employees to collect more taxes in order to improve their performance score and be eligible for a promotion.

The objective is purely financial benefit, private gain. The beneficiaries of this rotten system are the Ministry of Finance, the National Tax Bureau and the Enforcement Agency. However, this bonus system which is a product of the martial law era has no legal basis but a fund is budgeted for this system every year.

Businesses are often coerced by tax officers to pay some unjustified taxes, and some tax officers would even conduct malicious tax audits for the sake of bonuses. Many people don’t owe any tax, but the Enforcement Agency would forcibly auction their property. Moreover, issuing a ‘wrong’ tax bill is not punishable

Former Control Yuan member Qian Lin Huijun once said in our webinar, “The bonus system should have been abolished long ago because bonuses provide an incentive to be greedy. Public servants are paid by the public money, they must work properly according to their conscience.”

The case of Tai Ji Men, for example, was listed by the Control Yuan in 2005 as one of the major human rights protection cases in the “General Report and the Work of Human Rights Protection of the Control Yuan (1999-2005).”

The case of Tai Ji Men shows that the system of tax bonuses granted to public servants can lead to undue fiscal and judicial harassment for years and decades.

It also proves that this system is a form of organized corruption inside state and an abuse of power of their leaders and their staff for personal financial benefit.