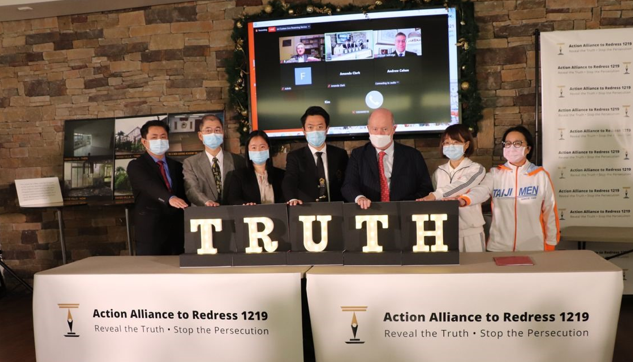 On the eve of the Summit for Democracy, international scholars and experts call on the Taiwanese government to resolve the Tai Ji Men case as soon as possible, implement transitional justice, and protect freedom of religion or belief

Action Alliance to Redress 1219 (08.12.2021) – President Joe Biden is expected to convene the Summit for Democracy on Dec. 9, and the American Institute in Taiwan (AIT) reported in November that by participating in the Summit, Taiwan, as a leading democracy, could make meaningful contributions to the fight against corruption, authoritarian regimes, and the promotion of human rights at home and abroad, according to World Journal.

However, Taiwan has not always been a democracy. The 25-year Tai Ji Men case is a landmark case of government corruption, perpetuation of the authoritarian legacy, and human rights violations in Taiwan! On December 7, 2021, the Action Alliance to Redress 1219 hosted an international press conference in Washington, D.C. to reveal the truth about the Tai Ji Men case, where injustice was committed by the government of Taiwan against the Tai Ji Men Qigong Academy and its founder, Dr. Hong, and to seek the assistance of the United States and all nations committed to freedom of expression and human rights in righting this wrong.

Prof. Massimo Introvigne, founder and managing director of the Center for Studies on New Religions (CESNUR), made a special trip from Italy to Washington, D.C. to attend the meeting, despite the threat of the COVID-19 virus. “We love Taiwan! We appreciate the democratic role of Taiwan,” stated Prof. Introvigne, explaining that because of their love for the country, the Tai Ji Men dizi (disciples) hope that Taiwan will shake off the ghosts of its authoritarian past and restore its international image as a truly democratic country that respects human rights.

Tai Ji Men dizi Gill Wang introduced the Tai Ji Men case, which began in 1996 in Taiwan when a prosecutor named Hou Kuan-jen used fabricated evidence and fake witnesses to accuse Tai Ji Men of fraud, tax evasion, and raising goblins. In 2007, Taiwan’s Supreme Court found Tai Ji Men not guilty of tax evasion or any other charges. In a democracy adhering to the rule of law, the case should have ended there; instead, Taiwan’s National Taxation Bureau disregarded the Supreme Court’s decision and continued to impose unjustified taxes on Tai Ji Men. In August 2020, Tai Ji Men’s sacred land, intended for a self-cultivation center for Tai Ji Men members, was illegally auctioned and forcibly confiscated.

Willy Fautré, director of Human Rights Without Frontiers, reminded the audience, the Tai Ji Men case was listed by Taiwan’s Control Yuan in 2005 as one of the major human rights protection cases in the “General Report and the Work of Human Rights Protection of the Control Yuan (1999-2005).” He pointed out the problem of Taiwan’s bonus system: “The case of Tai Ji Men shows that the system of tax bonuses granted to public servants can lead to undue fiscal and judicial harassment for years and decades.” “It also proves that this system is a form of organized corruption inside the state and an abuse of power of their leaders and their staff for personal financial benefit,” he added.

Through a video, many victims in the Tai Ji Men case shared their painful experiences as they had been intimidated and coerced by the prosecutor, and the trauma is still unhealed. The Tai Ji Men case is the one with the most victims and has lasted the longest in Taiwan’s history after martial law was lifted. Brenda Chen attended the event in person to speak about her family’s trauma. “On Christmas Eve in 1996, there was no peace in my family. Even though no one accused my dad of any crime, he was detained and held incommunicado for four months by the prosecutor. Our house was searched. We were scared and didn’t know when my dad could come home.” Prosecutor Hou Kuan-jen utilized starvation, exhaustion, threats, and intimidation, attempting to extract false testimony that the prosecutor wanted. Her mother was compelled to retire early owing to the smear campaign against Tai Ji Men, and her sister received a threatening note at school. In order to escape the nightmare of 1996, she and her sister immigrated to the United States and France respectively. Although her father received state compensation for wrongful imprisonment in 2008, he lamented not seeing the redress of the case before he passed away seven years ago.

To highlight the importance of the pursuit of truth, the event organizer conducted a lighting ceremony of a sign with the word “TRUTH.” Prof. Introvigne concluded the event by emphasizing the need of dispelling the misconception that the Tai Ji Men case is a solely local Taiwan tax dispute best left to Taiwanese lawyers to resolve.

In fact, the Tai Ji Men case involves international human rights and religious freedom issues. The case remains unsolved precisely because it is misinterpreted as a simple local administrative matter.

Jeff Chen, on behalf of worldwide Tai Ji Men members, read a statement summarizing the main events of the Tai Ji Men case, and denouncing the illegal actions by Prosecutor Hou Kuan-jen and the National Taxation Bureau: “For more than a quarter-century, the Tai Ji Men culture, the human rights of Tai Ji Men’s leader and members, and their freedom of thought and belief have been severely harmed, and over ten thousand families have been severely persecuted, which is a history of blood and tears. It is one of the longest-running cases in Taiwan’s history, involving the largest number of victims and seriously infringing on the freedom of religion or belief of worldwide Tai Ji Men members.” Jeff stressed, “With one voice, we hereby denounce the perpetrators. Those who enforce public authority should not be allowed to violate the law of evidence and due process. They should not disregard integrity for personal gain, commit human rights violations, or infringe on people’s religious freedom. We demand that the Taiwanese government implement transitional justice and return Tai Ji Men’s sacred land immediately. We shall not give up until justice and righteousness are restored, so that Taiwan can become a beacon of true democracy, freedom, and human rights.”

About Action Alliance to Redress 1219: Action Alliance to Redress 1219 is a group of international and Taiwanese legal, religious, and human rights specialists working to restore the truth about the ongoing persecution of Tai Ji Men in Taiwan by a small group of bureaucrats that has lasted for 25 years, as well as their misuse of authority and violations of the law. In addition to rectifying the Tai Ji Men case and revealing the truth, it is also committed to defending religious freedom, speaking out for related injustices in Taiwan. The Alliance calls on those in power not to ignore people’s fundamental human rights and demands that perpetrators be held accountable to protect democracy, the rule of law, and justice.

Caption: To emphasize the importance of the pursuit of truth, the event organizer conducted a lighting ceremony of a sign with the word “TRUTH,” symbolizing revealing the truth and lighting up hope.