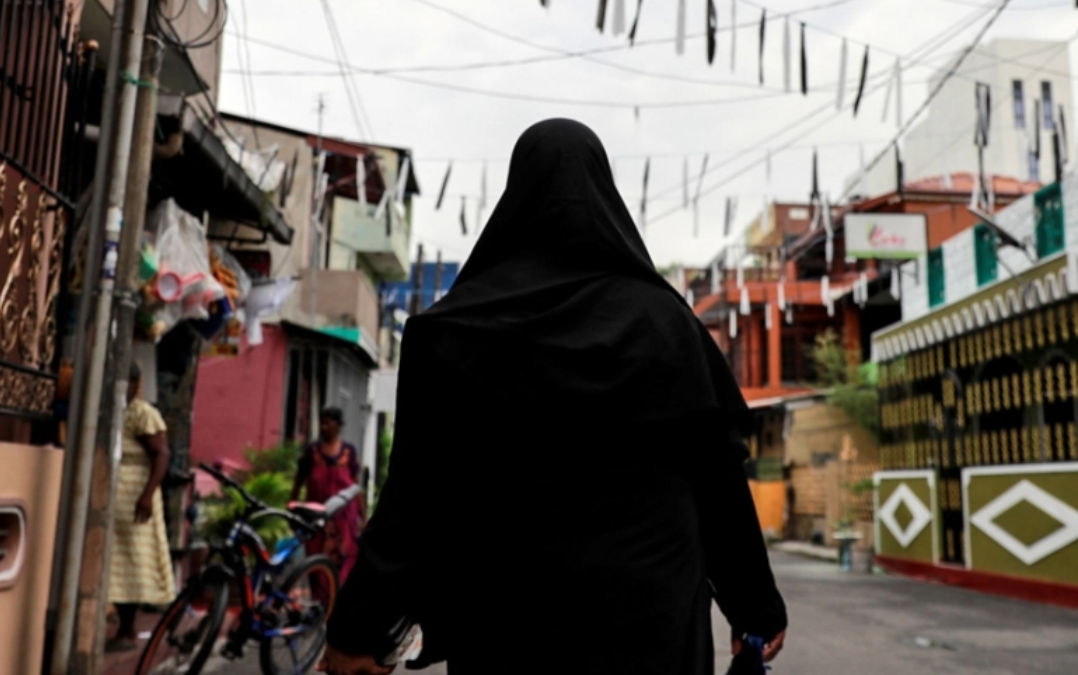 ALJAZEERA (13.03.2021) –  https://bit.ly/3vpMzxd – Sri Lanka’s government says it will ban the wearing of the burqa, a full-body veil that covers the face as well, and close more than 1,000 Islamic schools, the latest actions affecting the country’s minority Muslim population.

Separately, the government on Saturday announced using a controversial anti-terror law to deal with religious “extremism” and gave itself sweeping powers to detain suspects for up to two years for “deradicalisation”.

Minister for Public Security Sarath Weerasekera told a news conference he had signed a paper on Friday for cabinet approval to ban the burqa – an outer garment that covers the entire body and the face and is worn by some Muslim women – on “national security” grounds.

“In our early days, Muslim women and girls never wore the burqa,” he said. “It is a sign of religious extremism that came about recently. We are definitely going to ban it.”

The minister said he signed documents outlawing the burqa, but they need to be approved by the cabinet of ministers and Parliament where the government has a two-thirds majority to see its bills through.

Weerasekera also said the government plans to ban more than 1,000 Islamic schools that he said were flouting national education policy.

“Nobody can open a school and teach whatever you want to the children,” he said.

The government’s moves on burqas and schools follow an order last year mandating the cremation of COVID-19 victims – against the wishes of Muslims, who bury their dead.

This ban was lifted earlier this year after criticism from the United States and international rights groups.

Shreen Saroor, a Sri Lankan peace and women’s rights activist, said the moves come “at a time when the Muslim community has been constantly targeted”.

“The compulsory cremation policy was revised, and now we hear so many other measures to some form of punishing the Muslim community,” she added, noting that Muslims in the country were not consulted in advance.

Citing the fact that the wearing of the mask has been made compulsory in the country during the coronavirus pandemic, Saroor said the burqa “looks [like] a very political revenge move”.

The wearing of the burqa in the majority-Buddhist nation was temporarily banned in 2019 after the Easter Sunday bombing of churches and hotels by armed fighters that killed more than 250 people.

The move drew a mixed response, with activists saying it “violated Muslim women’s right to practise their religion freely”.

Meanwhile, President Gotabaya Rajapaksa, who was elected president in 2019, after promising a crackdown on “extremism” promulgated regulations allowing the detention of anyone suspected of causing “acts of violence or religious, racial or communal disharmony or feelings of ill will or hostility between different communities”.

The rules, effective on Friday, have been set up under the Prevention of Terrorism Act (PTA), which local and international rights groups have repeatedly asked Colombo to repeal.

“Anybody can be arrested for saying anything,” said Saroor, calling PTA “very problematic”.

Sri Lanka’s previous government, which was defeated by Rajapaksa at the 2019 elections, had pledged to repeal the PTA after admitting it seriously undermined individual freedoms, but failed to do so.

A former defence secretary, Rajapaksa is immensely popular among the Sinhala Buddhist majority, who credit him with ending the island nation’s 26-year civil war in 2009.

Critics, however, say during the war he crushed the dissident Tamil Tigers with little regard for human rights, allowed abductions and gave consent to extrajudicial killings. He has rejected all the allegations.