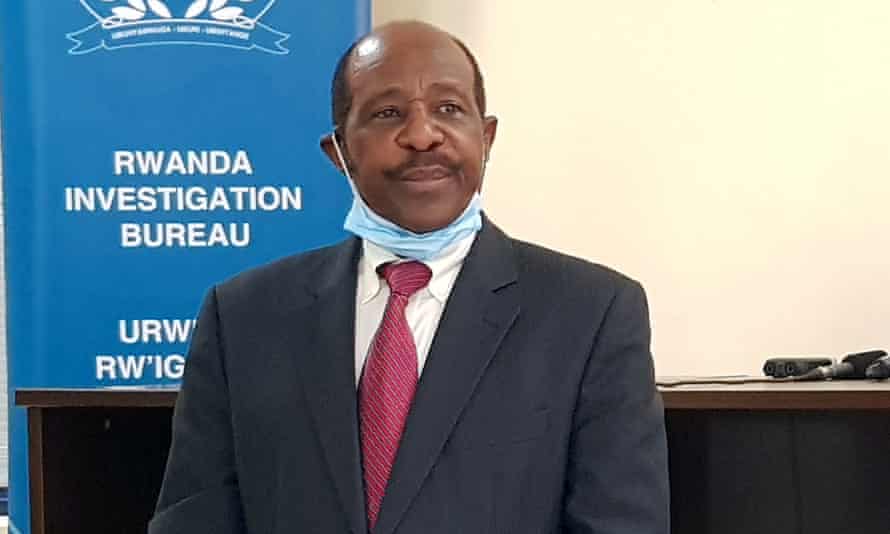 HRWF with family (20.09.2021) – Yesterday, 20 September,  the Show Trial of Paul Rusesabagina, a 67-year old Belgian/ Rwandan citizen, ended with a guilty verdict on eight of nine charges and was sentenced to 25 years prison. A guilty verdict was expected from the beginning. Paul was pre-judged by the Rwandan regime years ago as a human rights critic and perceived enemy of the state. The only question was whether the Rwandan government would attempt to make themselves look better by finding him not guilty on some charges, or by limiting the sentence. An innocent man, kidnapped and held as a political prisoner, was wrongfully convicted today.

The Rusesabagina family released the following statement after the verdict was announced:

“Our husband and father, Paul Rusesabagina, was kidnapped, tortured and held in solitary confinement. He was forced to undergo a show trial this past year. We knew from the day he was kidnapped that the verdict would be “guilty” on some or all of the false charges. We are happy that the charade of the trial is ending.

Paul Rusesabagina is a humanitarian who crusades for the human rights and liberties of the Rwandan people. He has been a critic of every Rwandan regime when they have abused human rights. He has criticized Paul Kagame’s human rights abuses for nearly two decades.  Kagame made it clear over that time that one of his main goals was to silence our father. He is in a dictator’s clutches. They have finished this sham by finding him guilty today. We have told the world over and over that there is no fair trial process in Rwanda, and the past months have shown that. There is no independent judiciary, and there will be no justice for our father. All we can do now is make this clear to everyone – a dictator will be jailing a humanitarian this week. If the international community does not step in, he will probably be in jail for the rest of his life.”

The allegations of founding, supporting and funding terrorist groups were never proven in court. No credible evidence was provided on any charge. Sadly this is par for the course in Rwanda, where an independent judiciary does not exist in high profile cases. There is no rule of law there. Paul was found guilty because of politics, not because of any legal proceedings or evidence. And politics in Rwanda are such that no one, inside or outside of the country, dares to challenge the record or the actions of the government or President Paul Kagame.

Rusesabagina’s legal team was unsurprised by the verdict. American lawyer Peter Choharis notes that: “In truth, the verdict was delivered long ago: the trial has been fundamentally unfair and has lacked due process. And despite that, the prosecution still did not produce any evidence linking Paul to the attacks in question.”

Australian lawyer Kate Gibson said that: “Paul Rusesabagina’s inevitable conviction is the end of a script that was written even before he was kidnapped in August 2020.  The only thing that has been surprising in watching this horror show unfold over the last year, has been the brazenness and openness with which the Rwandan authorities have been willing to systematically violate all of the fair trial rights to which Paul was entitled.”

Canadian lawyer Philippe Larochelle, reflecting on the verdict, stated “this trial started with kidnapping, torture and denial of legal representation.  Once local lawyers were appointed, they had no time to prepare for trial.  Some co-accused detailed how they had been forced into making false accusations against Rusesabagina. Witnesses who had made false allegations in the sham trial against Victoire Ingabire were simply recycled in this trial.  The whole Rwanda opus in the end raised only one question: why kidnap, torture and deny fair trial rights if you have reliable evidence supporting the allegations against the accused?  The answer is quite obvious: there is not a shred of reliable evidence. There is no other explanation for the absence of due process and complete disregard for Rusesabagina’s most fundamental rights.”

Bob Hilliard, lawyer on the GainJet lawsuit said, “Kangaroo Courts are only capable of kangaroo verdicts. Paul’s bravery in Rwanda was undeniable. Yet now,  a proud  life’s work against a strong man rests in the corrupt hands of the worst kind of leader, someone who is a stranger to the truth and  rules a wasteland of his own making. Paul should be immediately released and the World join together to condemn this puppet court and its mendacious puppeteer.”

Specifics from the verdict:

In court today in Kigali, the judges read a long verdict against Paul and the co-accused. The only surprises came when additional “evidence” was fabricated in the verdict that was not was not heard before in court, including in any document or statements submitted during the trial. This featured multiple accusations that Paul funded terrorist activities not previously discussed. In particular, there was a brand new allegation that Paul fund raised over 300,000 euros for the FLN.

On the guilty charges, the vast majority of the “evidence” cited by the court came from two sources: statements made by Paul under duress in late August and early September, and the Belgian dossier. These statements were allegedly made by Paul shortly after he was tortured and without benefit of any counsel present. Paul’s first statements in open court included denying that this testimony was accurate and clarifying that he was forced to sign the documents. The court also made various claims about evidence that they received from Belgium in the “Belgian dossier.” This was the conclusion of the Belgian investigation into Paul’s activities, made at the request of Rwanda starting in 2019. Accusations included WhatsApp messages and emails that the court purports show Paul’s guilt. Paul’s team has access to and has reviewed this document. As expected, none of the supposed “evidence” mentioned in the court’s ruling exists. The Rwandan government apparently does not expect others to read this dossier, and thus is claiming evidence from it that is completely fabricated.

Underlying this entire case is the fact that the Rwandan prosecutors claim that three attacks were perpetrated against Rwandan civilians by the FLN, and these are blamed on the MRCD and Paul Rusesabagina by association. These attacks were NEVER documented in court. No credible evidence was ever provided that these attacks occurred. No evidence was provided at all outside of statements by the prosecutors without documentation, and some coerced statements from the co-accused. These are the same attacks that Paul and the MRCD leadership denied when they occurred. The MRCD in late 2019 argued strongly that the Rwandan government was behind the attacks, and called for international investigations by the United Nations to find the truth. Victims during the trial described being attacked, but never identified the attackers. Paul and the co-accused were not identified by anyone as attackers. And the FLN was not identified as the group that committed the attacks.

All charges in this case are based on the existence of these alleged attacks. No credible evidence was presented that these attacks ever happened. If they did not occur, the entire trial is a fraud.

As the trial concludes, the Rusesabagina family and team are looking forward to the next steps needed to free Paul. As Belgian lawyer Vincent Lurquin notes, “Paul is a political prisoner, so the solution must be political.”

There was no fair trial in the case of Paul Rusesabagina. Anyone who understands politics in Rwanda knew from the start that this was never a possibility. Justice in Rwanda for high level critics of President Paul Kagame is a political process, and all answers go through the office of the President.

Now is the time for the world community to step up and stand up for human rights in Rwanda. Paul Rusesabagina and the rest of the Rwandan people were abandoned by the world during the genocide in 1994. Paul’s family urges the world to not abandon him again.

Now that the trial is over, an innocent man sits in jail, waiting for the world to hold Rwanda to account for the appalling and profound violations of his human and legal rights. In 1994, Rusesabagina reached out to the international community to help stop the Genocide. They were silent. Will they be silent again, or will they stand up for human rights and real justice.

On September 21, 2021 the legal team and family will hold a press conference to go over the trial and verdict in the case of Paul Rusesabagina.

The press conference will be held in person on Tuesday, September 21 at 2:00 pm in Brussels, Belgium at Rue Froissart 95, 1000 Brussels at the Press Club. The conference will also be broadcast live on Zoom. You will find the instructions to register for the Zoom webinar at the end of this email. The video will also be posted on Facebook.

To RSVP for the Press Club press conference in person please email kitty@kurthlampe.com

To RSVP for the virtual press conference please register here:

The press conference will also be available to be viewed on the #FreeRusesabagina Facebook page: https://www.facebook.com/FreePaulRusesabagina

In late August, 2020, Paul Rusesabagina, the international human rights icon whose story of saving 1,268 people during the Rwandan Genocide was told in the film Hotel Rwanda, was flown against his will from Dubai, United Arab Emirates to Kigali, Rwanda. He has been on trial in Rwanda since February 17, 2021 and the verdict is expected on September 20, 2021.