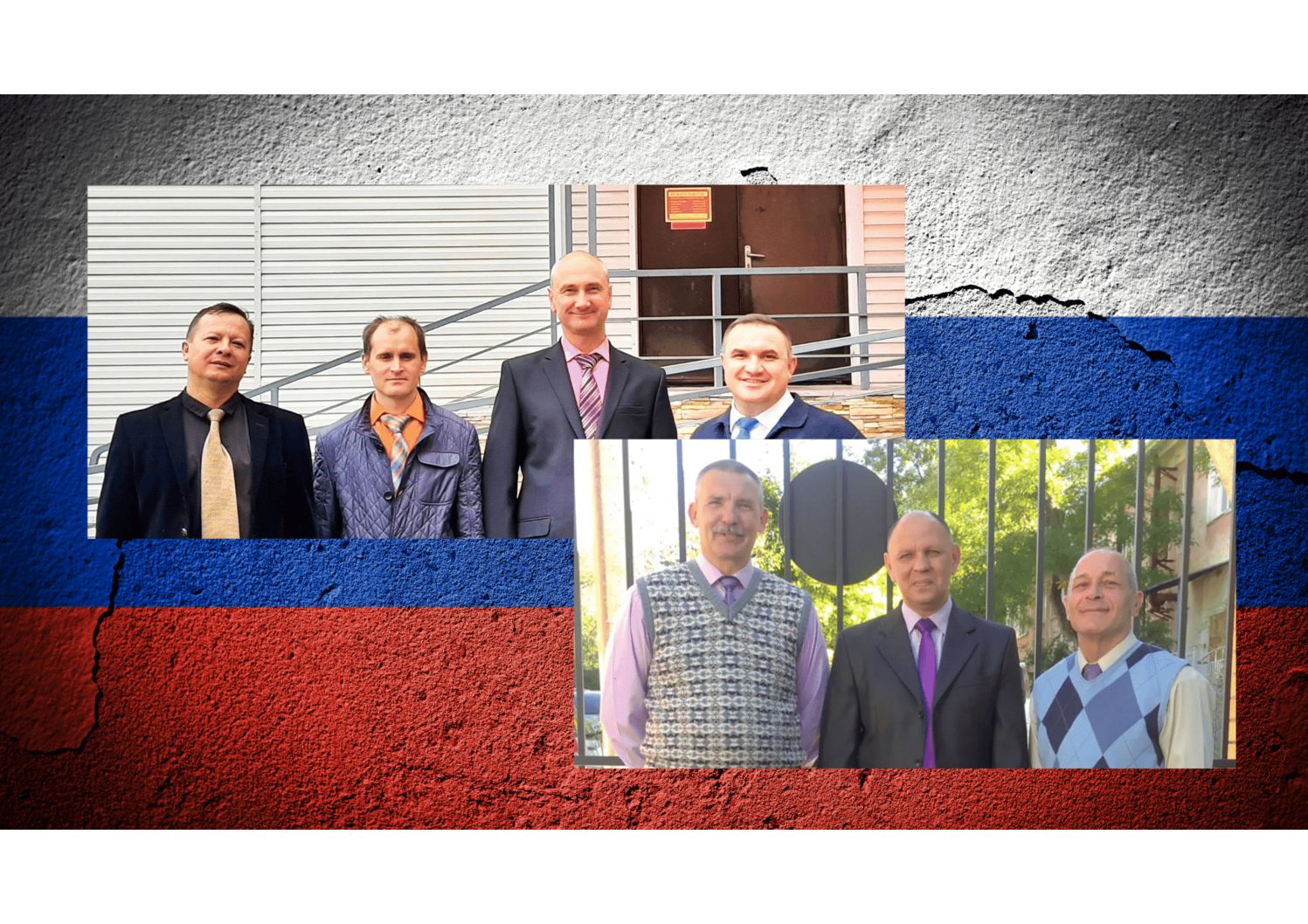 The European Times (02.11.2022) – https://bit.ly/3DvJlNt – The persecution of Jehovah’s Witnesses is going on unabated. In the last 10 months, 40 of them have been sentenced for merely practicing their religion in private and put behind bars.

Here is the list of the last seven Jehovah’s Witnesses sentenced in October 2022 and serving heavy prison terms:

On 25 October in the Amur Region:

On 6 October in Sevastopol (Crimea):

On October 25, 2022, Ivan Kuznetsov, judge of the Tyndinskiy District Court of the Amur Region, sentenced four of Jehovah’s Witnesses from the city of Tynda to imprisonment in a penal colony. Vladimir Bukin, Valeriy Slashchev and Sergey Yuferov were given 6 years and 6 months each, and Mikhail Burkov — 6 years and 2 months.

The believers were taken into custody in the courtroom. They can appeal the verdict to a higher court.

The investigation lasted for a year and a half. On June 28, 2021, the case (consisting of at least 15 volumes) went to court. As “evidence of illegal activity” of the defendants, the prosecutor presented texts from seized postcards and printouts on the topics “Good manners are an integral feature of God’s people”, “What kind of treatment God expects for the elderly” and “Love strengthens”. Although during the hearings no specific facts of extremist actions on the part of the defendants were provided, the prosecutor asked to assign them long prison terms: for Vladimir Bukin — 8 years and 6 months, for Sergey Yuferov and Valeriy Slashchev — 8 years and 4 months each and for Mikhail Burkov — 6 years and 6 months of imprisonment in a penal colony.

Addressing the court with the last plea, the believers stressed that they consider themselves innocent. “Our only ‘guilt’ is that we want to glorify God and keep his commandments,” Vladimir Bukin said. “Therefore, if I am found guilty, it is guilty of loving God, his holy name and his word, the Bible.” And Mikhail Burkov noted: “I am being judged because I am learning to show positive qualities: kindness, peacefulness, compassion, patience, respect … A reference from the place of employment and two letters of gratitude from the mayor of the city of Tynda confirm that I am a hardworking, sympathetic and peaceful citizen ready for any good work.”

In the Amur Region, 23 Jehovah’s Witnesses suffered for their faith. Aleksey Berchuk and Dmitriy Golik are serving long terms in a colony, while Konstantin Moiseyenko and Vasiliy Reznichenko received a suspended sentence. Another seven men are defending their right to profess the religion of Jehovah’s Witnesses in court. Most of the cases against believers in this region were initiated by FSB investigator Obukhov.

They were prosecuted under Criminal Code Article 282.2, Part 1 – Six to 10 years’ imprisonment, plus a compulsory ban on holding certain positions and/or carrying out certain activities for up to 10 years and compulsory restrictions on freedom for one to two years after release; or a 400,000 to 800,000 Rouble fine.

Yevgeny Zhukov, Vladimir Maladyka and Vladimir Sakada received 6 years in prison each. This sentence is to be served in a correctional colony of general regime, with deprivation of the right to engage in educational activities, activities related to speeches and publications in the media, posting materials in information and telecommunication networks, including the Internet for a period for 7 years, with restriction of liberty for a period of 1 year

The believers were immediately taken into custody. They intend to appeal the verdict.

Right from the courtroom, Zhukov, Maladyka and Sakada were taken to SIZO No. 1 in the city of Simferopol.

Zhukov, Maladyka and Sakada faced persecution for their faith on October 1, 2020, at the height of the coronavirus pandemic. For the fact that believers participated in peaceful religious meetings, a criminal case was initiated against them. They, as well as their co-religionists from Sevastopol, were searched. On the same day, four believers, including Zhukov, Maladyka and Sakada, were sent to a pre-trial detention center, where they spent 6 to 7.5 months. In addition, Vladimir Maladyka and his wife were subjected to compulsory examination in a psycho-neurological dispensary because of a bag of powdered milk found at their home, which seemed suspicious to the investigators.

Vladimir Sakada and Vladimir Maladyka have families, Evgeny Zhukov takes care of his disabled brother. All three believers have a reputation as respectable people and law-abiding citizens.

The investigation was conducted by the FSB of Russia for the Republic of Crimea and Sevastopol for about six months. In April 2021, the case went to court. As “evidence” of the believers’ guilt, the investigation used hidden video recordings of worship services made by FSB agents. In the video, believers pray, sing and discuss the Bible. During the court hearings, Vladimir Sakada stated that the videotapes presented to the experts and the court “were subjected to unauthorized changes.” However, the court refused to verify this material evidence. FSB officer Dmitry Shevchenko, who conducted operational-search activities, said in court that there were no signs of extremism and facts of inciting religious hatred in the actions of the defendants. According to him, he has been familiar with the activities of Jehovah’s Witnesses in Sevastopol since 2015, and their services have always been of an exclusively religious nature.

However, the court returned a guilty verdict.