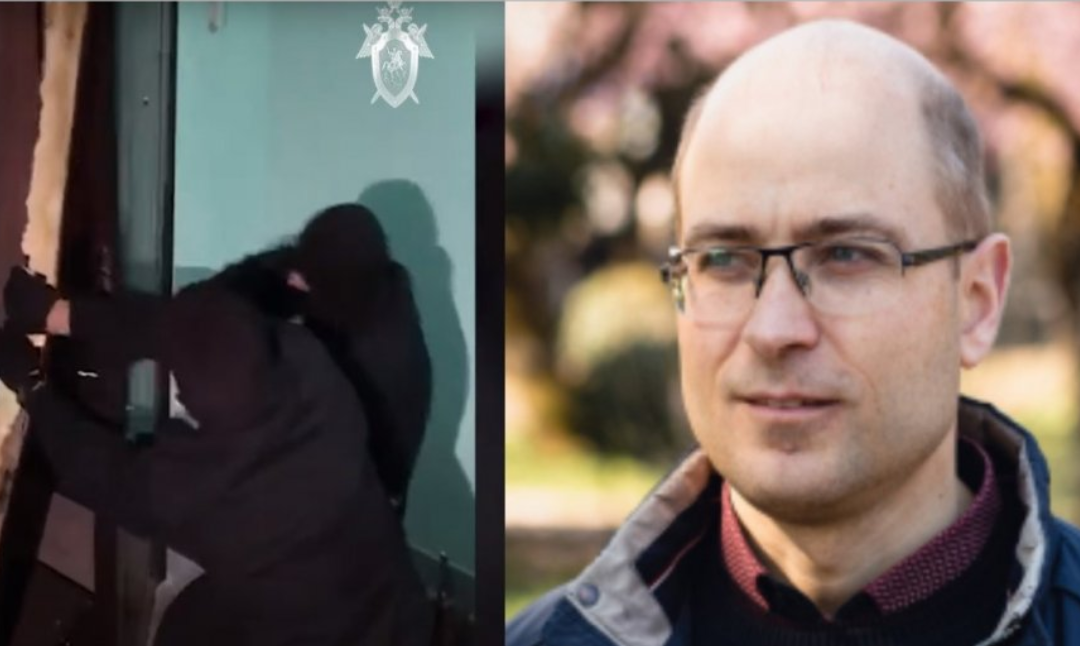 Kharkiv Human Rights Protection Group (16.03.21) – https://bit.ly/30YxK6M – A Russian-controlled court in Simferopol has placed 42-year-old Ukrainian Taras Kuzio under house arrest following mass armed searches of Jehovah’s Witnesses’ homes in occupied Yalta.  The occupation regime has slightly varied the charge this time, although Kuzio is facing the same persecution as other believers for practising his faith.

The hearing on 12 March at the ‘Kievsky District Court’ took place behind closed doors, and with a lawyer appointed by the ‘investigators’.  Crimean Solidarity civic journalists were therefore unable to attend the hearing, but cite their own source in reporting that Kuzio is charged with ‘financing an extremist organization’ under Article 282.3 § 1 of Russia’s criminal code. The ‘court’ took into account Kuzio’s two underage children; his state of health and his social ties with Yalta, and ordered house arrest, rather than full detention, as demanded by the ‘investigators’.  Kuzio has also been ordered to have no contact with others involved in the ‘case’ and has been prohibited from using the Internet, sending or receiving mail.

Kuzio’s family plan to appeal against the ruling.

13 armed searches were carried out on 11 March by the Investigative Committee and FSB, accompanied by Russian-controlled police and OMON [riot police] officers.  Four believers were interrogated, with Kuzio detained.  The searches were ‘authorized’ by Kievsky District Court ‘judge’ Viktor Krapko.

Although the charge is very slightly different from the usual Article 282.2 § 1 ‘(‘organizing the activity of a religious organization whose dissolution has been ordered due to extremist activities’), it is almost certainly based on the same activities.  Since the shocking Supreme Court ruling from 20 April 2017, which outlawed the Jehovah’s Witnesses as a supposedly ‘extremist organization, believers have been persecuted in Russia and in occupied Crimea for reading the Bible in groups, taking part in shared prayers, etc.

There were also searches on 10 February at the homes of Andriy Rogutsky and Lyudmila Shevchenko with the FSB & Co. removing Bibles, notebooks and electronic devices.

Kuzio has been the target of Russian religious persecution since 20 March 2019 when at least six armed searches were carried out in Yalta and neighbouring Alushta.

Although the renowned Memorial Human Rights Centre reported two men: Kuzio and Artem Gerasimov as being charged under Article 282.2 § 1 following that ‘operation’, the only ‘trial’ was of Gerasimov, and he was only under an undertaking not to leave Yalta.

Gerasimov’s ‘trial’ was the second persecution of a Jehovah’s Witness in occupied Crimea, and took place almost in parallel with the case of Serhiy Filatov, a father of four from Dzhankoy, who had been arrested after the first round of armed searches during the night from 15-16 November 2018.

It was probably because of the appalling six-year sentence against Filatov on 5 March 2020, that Gerasimov was initially ‘only fined’ despite the Russian-controlled prosecutor, Oksana Chuchuyeva, having demanded a six and a half year sentence.  It is quite likely that the plan was to see what the western reaction was to this first prison sentence passed down by an occupying state against a person accused only of practising his faith.  If that was the intention, then the reaction, or lack of it, made Russia brazen enough, on 4 June 2020, to revoke the first ruling against Gerasimov and sentence him to six years’ imprisonment.

Worth stressing that such FSB persecution of believers is generally accompanied by propaganda exercises on Russian-state controlled media.  The latter, in reporting the March 2019 armed raids which first targeted both Gerasimov and Kuzio, claimed that the FSB had ‘broken up a Jehovah’s Witness cell’.  A video on Vesti.Krym showed burly men in masks and military gear making their way into what is presumably Gerasimov’s home and demonstrating religious material, including the Bible, as though it were ‘evidence’.

The mounting persecution of believers in Russia and occupied Crimea, and the increasingly severe sentences passed, give grounds for concern about the ‘trial’ in occupied Sevastopol of 54-year-old Viktor Stashevsky which is now coming to an end.  Unfortunately, the ‘judge’ in that case is Pavel Kryllo from the Gagarin District Court, who has already been involved in the politically-motivated trial of one Ukrainian (Ihor Movenko ).

On 26 May 2020, the very same day that Filatov’s 6-year sentence was upheld, armed FSB, Rosgvardia and masked OMON [riot police] officers burst into four homes in occupied Kerch on 26 May 2020, with Artem Shabliy, a 29-year-old father of two, arrested.  The criminal proceedings are known to have been initiated by ‘investigator’ Valery Zarubin with Shabliy accused of having “drawn others into the activities of an extremist organization” by discussing the Bible with them.

The armed searches on nine Jehovah’s Witness homes in Sevastopol on 1 October 2020 resulted in the arrests of four men: 51-year-old Yevhen Zhukov; Volodymyr Maladyka (57); Volodymyr Sakada (50) and Ihor Schmidt (48)  All of them were remanded in custody the following day and remain imprisoned to this day.

Photo : Investigative Committee image with men forcing their way into a home, although in none of these cases has anybody shown resistance, Taras Kuzio, photo probably from 2019