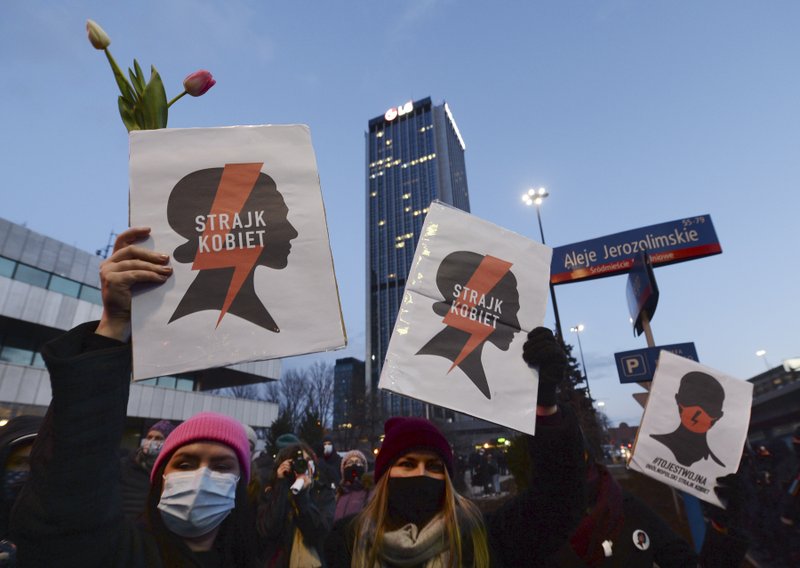 AP News (08.03.2021) – https://bit.ly/3lclQ2v – Women’s rights activists in Poland marked International Women’s Day on Monday caught between reasons to celebrate and a heavy sense that they are facing a long battle ahead.

This year’s Women’s Day, which was marked with protests, comes after a near total ban on abortion took effect in January in the mostly Roman Catholic country, a step that had long been been sought by the conservative ruling party, Law and Justice.

But as Polish Women’s Strike leader Marta Lempart told The Associated Press ahead of a protest in Warsaw, Poland is also a country that is undergoing rapid secularization, with support growing for a liberalized abortion law.

She and other movement leaders are convinced that the process of social change ultimately will favor their struggle for reproductive freedom. Monday’s protest focuses on abortion rights, but also included calls for greater state support for in vitro procedures and sexual education.

Around her, supporters of the Women’s Strike poured into its Warsaw office, preparing banners and other materials for their “Women’s Day Without Compromises” protest hours later.

Compared to mass protests of the past months, Monday’s protests were relatively small. The demonstrators, however, faced a large presence of police who created cordons to contain the crowd in a limited area. Police declared the gathering illegal because it defied pandemic restrictions, and officers requested identification from people and some scuffles ensued.

“We keep fighting. I don’t see a way to stop it,” said Klementyna Suchanow, another Women’s Strike leader and the author of a book “This is War: Women, Fundamentalists, and the new Middle Ages,” about global efforts by ultra-conservatives to roll back women’s rights.

“We are under attack by religious radicals, and this is an international movement. so we women in different countries, we need to face it and fight against it,” she said. “It’s something that is happening to all of us: to Argentinians, to Americans, to Poles, to Croatians.”

Activists noted that Polish women are getting abortions no matter what the law says, some with pills and others by traveling to Slovakia, Germany, Norway or other countries.

“If a woman wants to have an abortion nothing will stop her,” said activist Marta Krzynowek, who says the restriction on abortion rights are part of a larger assault on democracy in Poland.

“Abortion is only one part of this picture,” she added. “We are all very, very tired, but we have the energy to try and change things. This situation isn’t good and it is worth fighting for.”

Suchanow noted that many activists have been arrested, charged with crimes, or faced police violence at protests.

“This cannot be wasted, it cannot be for nothing,” she said.