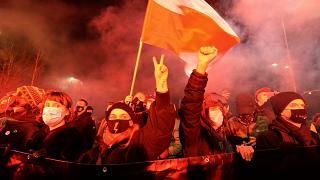 The ban on abortions in nearly all circumstances is to come into effect after the law was published in the Official Gazette on Wednesday.

Thousands of people gathered outside the court building in Warsaw in the evening, responding to calls for new protests by women’s groups who masterminded weeks of massive demonstrations last year against the initial ruling in October.

Protesters later marched through the city centre to the ruling party’s headquarters with signs of the leading “Women’s Strike” group and pro-LGBT rights rainbow flags.

Protests were also held in many other cities, under a heavy police presence. More demonstrations are planned for Thursday.

The law, originally passed in October, was subsequently delayed due to widespread protests throughout the country against the measure, which took place amid the coronavirus pandemic and saw clashes between demonstrators and police. No violence was reported at Wednesday’s protests.

Poland’s ruling conservative government said on Twitter: “The Constitutional Court presented a written justification of the ruling on the protection of life. In accordance with constitutional requirements, the ruling will be published today in the Official Gazette.”

The Constitutional Court, which was reformed by the religious, conservative Law and Justice Party (PiS), has banned abortions of fetuses with congenital defects. Termination of pregnancy will now be allowed only if the woman’s health is threatened or if the pregnancy is the result of a criminal act, such as rape or incest.

Critics argue that it narrows the already tight law to a near total ban of abortions.

Poland already had some of the strictest abortion laws in the European Union. Even before the ruling, many Polish women sought abortions in neighbouring Germany or the Czech Republic.

An estimated 200,000 abortions are performed illegally or abroad every year, according to feminist organisations.

The main opposition Civic Platform party condemned the court’s move Wednesday as “a provocation” by the ruling party Law and Justice (PiS). It is widely seen as having undue influence on the judiciary following reforms it passed affecting the way judges are appointed.

Leader Borys Budka attacked the decision on Twitter, accusing Jarosław Kaczyński, leader of PiS and deputy prime minister, of using the ban to “cover up the traces of the government’s defeat in the fight against COVID” and “the failure of the vaccination programme”.

The government announcement led to immediate calls for activists to take to the streets in Warsaw and across the country.

“We urge everyone to take to the streets…Express your anger as you see fit,” Marta Lempart of the Women’s Strike, the main movement behind the protests, told reporters on Wednesday.

“The whole of Poland is mobilising, not just Warsaw, we are ready! When we talk about women’s hell, we can now talk about government hell,” added Klementyna Suchanow, also from the movement.

The new law was made in response to a motion from over 100 ruling party lawmakers, whose names have not been made public.

The unrest shows growing discontent among many Poles with the right-wing government, which has been criticised by European officials and politicians for eroding democracy.