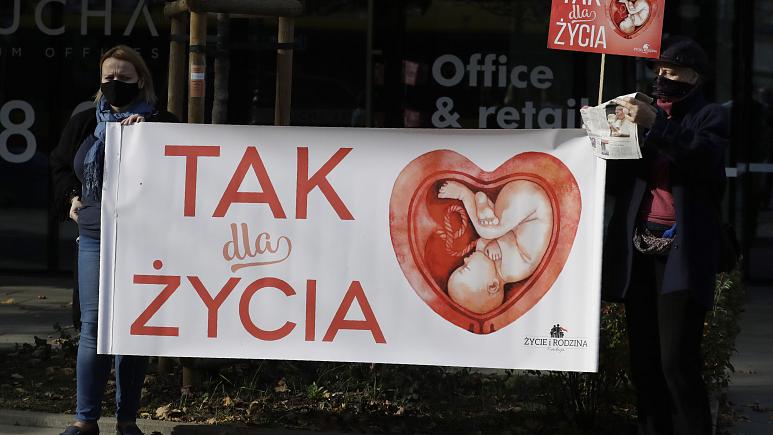 Euronews (12.05.2021) – https://bit.ly/2Rzz5zW – Maja, a 27-year-old from a small town in the northeastern Polish region of Podlasie, was neither financially nor emotionally ready for another child when she found out she was pregnant.

With legal abortion in her country not being an option, she contacted a group providing underground postal access to abortion pills and took them at home while breastfeeding her 11-month-old baby.

Another woman, Anita, wanted a child but learned when she was 13 weeks pregnant that due to a congenital defect, her baby would die within a few hours of birth – if not before.

Due to a recent change in Polish law that forbids women from terminating pregnancies even in cases of severe and irreversible fetal defects, the young woman was told to wait until she miscarried.

100 days since the Constitutional Court imposed a near-total ban on abortion, Maja and Anita’s stories have become the new normal in Poland.

Since January 27, the only exceptions to the total ban on abortion are in cases of rape or incest or when the mother’s health is in danger. Doctors who carry out abortions face up to 3 years in prison.

As a result, many Polish women are forced to continue pregnancies against their will, while others go abroad to have abortions. Others have abortions in secret at home.

The law sparked the country’s biggest protests in its post-communist era and drew international condemnation, including from the European Union.

Tens of thousands of women impacted

Abortion without Borders, an initiative founded in 2019 to support women in unintended pregnancies in Poland and abroad, says it has helped a total of 17,000 people access abortion, either at home – using pills – or abroad, in clinics, in the first six months after the Polish constitutional court ruling.

That is a significant increase compared to 2019 when 5,000 women turned to the group for help in terminating their pregnancies.

Kasia, 15, was one of those the charity helped. She was 12 weeks pregnant when she managed to tell her mother that she was expecting. She was worried about disappointing her mother but instead she contacted Abortion Without Borders on her daughter’s behalf.

Kasia had an abortion in the Netherlands last month.

Women Help Women, a group providing postal access to abortion pills, says it has responded to over 46,000 messages from Poland and provided help to 10,000 people.

“It’s been devastating for women because it is clearly an oppressive system that has developed against their health and their lives,” said Irene Donadio, senior lead of strategy and partnership at the International Planned Parenthood Federation-European Network (IPPF-EN).

But she also noted the “amazing resistance and resilience among women in Poland with activists that have been engaged immediately in mobilising solidarity and raising funds to support women in situations of hardship.”

The Abortion Abroad initiative said it raised over €91,000 of funds in the six months after the ruling.

The funds were used, among other things, to cover the costs of abortion procedures and pills, pay for accommodation and travel as well as COVID tests.

Another example of cross-border solidarity is the group Ciocia Czesia (Auntie Czech), which was set up last year to help Polish women seek abortion in the neighbouring Czech Republic.

The group got in contact with similar collectives in Berlin and Vienna – Ciocia Basia and Ciocia Wienia – while launching a fundraising campaign to help cover the costs of the procedures, travel and accommodation.

Machalowska told Euronews that about 215 women contacted Ciocia Czesia thus far. The group provides them with legal and practical information in their language and puts them in touch with Polish-speaking medical staff.

In some cases, the group covers the costs of the procedure and travel completely, and in others only partially.

“Many private businesses would like to have a piece of this cake,” Machalowska noted, adding that a group was “against abortion tourism.”

Accusations of abortion tourism were at the centre of an angry letter sent to the Czech government by a Polish diplomat in Prague, according to media reports.

The diplomat was quoted as writing: “From the point of view of Czech-Polish relations, we perceive it as unfortunate if legislative proposals to legalise commercial abortion tourism are openly justified by the intention to circumvent Polish legislation protecting unborn human life, and if those proposals have the purpose of encouraging Polish citizens to break Polish law.”

The letter came as the Czech parliament debated new legislation that would clarify the terms under which foreigners can get abortions in the country.

Euronews reached out to the Polish Foreign Ministry to confirm and comment on the letter but had received no response at the time of publication.

According to Czech media, the Czech government replied that Poland did not have the ability to interfere with internal legislative processes and that abortions on Polish women on its territory was in line with both domestic and EU law.

Machalowska explained that abortion was completely legal in the Czech Republic for up to 12 weeks of pregnancy for any person legally staying in the country, including EU citizens. In case of pathological reasons, the delay is extended to 24 weeks of pregnancy.

The only change in the bill intends to ensure that Czech doctors are fully legally covered when they perform abortions, she told Euronews.

In a statement published on Facebook in reaction to the Polish letter, the group said: “The visions and pleas of Polish politicians whose imaginations have been overwhelmed by values proclaimed from church pulpits will not have any impact here.”

Polish women seeking to terminate their pregnancies also go to neighbouring Germany, Slovakia, or further in Europe, to the Netherlands and the UK.

“Covid is the biggest challenge,” Machalowska said, with travel rules and restrictions “changing almost every week.”

Due to social distancing rules, Ciocia Czesia activists have not been able to accompany the women to the hospital and their support was provided exclusively online, Machalowska told Euronews.

“There is this atmosphere of terror that state agents are trying to impose on anyone who doesn’t want to obey the fundamentalist agenda,” Donadio told Euronews, pointing to a report released last month by IPPF-EN, Human Rights Watch and CIVICUS.

“And we see that human rights activists are deprived of their freedom to protest, their freedom of assembly. They are charged for organising protests.”

As regards doctors, they are “clearly terrified with the changes because the government is putting a lot of pressure on hospitals and all on medical professionals. There is this immense threat of prosecution against doctors that is creating a massive chilling effect,” Donadio went on.

And the legislation might get even tougher in the future.

According to a letter, signed by 200 civil society organisations and sent to the Portuguese Presidency of the Council of the EU, a new bill criminalising abortion was presented by citizens’ initiative.”

“If adopted, the bill would afford full legal protection to the fetus from the moment of conception and limit the grounds for legal care by banning abortion in cases where pregnancy results from sexual assault or if the health of a pregnant person is at risk, as provided for in the Family Planning Act currently in force. Abortion would be treated as homicide punishable with up to 25 years of imprisonment,” the letter read.

With abortion out of the equation, the Polish government is planning to implement a package of measures later this year to boost perinatal care.

It has said it will create more perinatal hospices as well as provide additional care for pregnant women with foetal defects within hospitals and offer a helpline with “family assistants” on hand to provide advice.

But according to human rights groups, “under the pretext of providing care to pregnant women whose fetuses have a ‘suspected or diagnosed lethal defect,’ [the initiative] would require them to be referred to antenatal hospices where their pregnancies would be monitored and their decisions about pregnancy influenced,” the letter sent to the EU Presidency read.

Human rights groups say they want a bolder reaction from EU institutions to the situation in Poland.

“The European Union has been aware of the massive problems in Poland. I think that they have taken some steps in terms of infringement procedures and all that” but “it could be bolder. It could be stronger,” Donadio said.

“We want the general affairs council of the European Union to seriously treat the vast abuses of fundamental rights in Poland” at its June 22 meeting, she said.

“We would also like to see a strong stance on the constitutional tribunal,” she went on, because “the same tribunal that has adopted a decision that led to the almost total ban on abortion will now rule on the supremacy of EU law in Poland. So we risk that this politicised organ could give a blank check to this government to do whatever they want and that women will be sacrificed.”

“What we want to see is the use of the rule of conditionality of funding,” Donadio went on, with reference to a new mechanism that ties respect for the EU’s core democratic values with EU funding.

“This has to be used because now they are negotiating a gigantic financial package and we know that there are risks related to that, on how these incredible amounts of funding might be used to cement that authoritarian power in Poland.”

But it may take a while until the rule of law mechanism is triggered.

“We know that it will take about 3 years before the conditionality clause will be triggered if it is ever triggered,” Donadio noted.

“EU Member States should consider how to address the problem that they created the clause for because we don’t have three years to waste.”