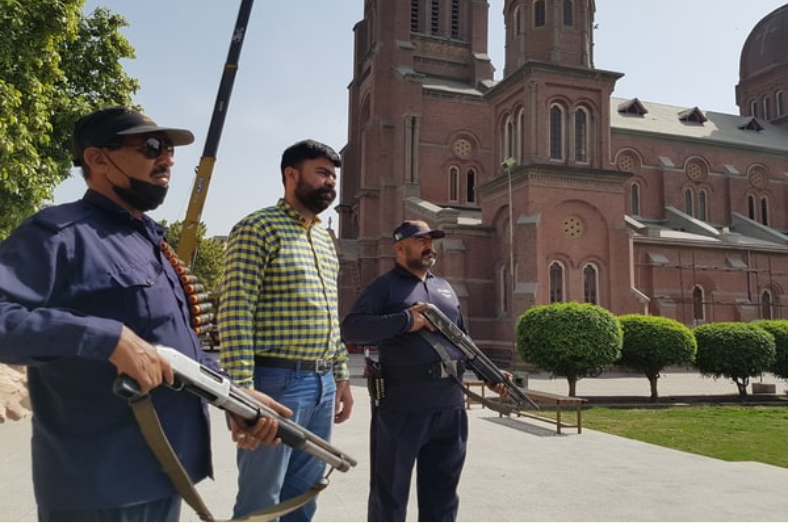 Aid to the Church in Need (03.09.2021)- https://bit.ly/3tzJVVh – Churches across Pakistan have stepped up security in response to the threat of terrorist attacks following the Taliban’s return to power in neighboring Afghanistan. At a meeting of Catholic and Protestant leaders, senior clergy agreed to tighten surveillance and beef up armed protection, especially at Sunday services. The move comes amid concerns that the Taliban’s take-over of Afghanistan will trigger extremist incidents aimed at Christian and other minority faith communities.

Pakistan human rights activist Sajid Christopher, chief executive of the Human Friends Organization, said there were fears raised that the Taliban-associated group Tehreek-e-Taliban Pakistan (TTP) and other militant organizations in Pakistan would capitalize on events in Afghanistan and target religious minorities including Christians.

Speaking to Aid to the Church in Need (ACN), Mr. Christopher said: “When the Taliban were in power before, there were a lot of terrorist attacks in Pakistan. There were terrorist organizations attacking churches and other Christian institutes. They clearly became targets. Now that the Taliban are back, it will strengthen the TTP and other Islamist groups and so there could be attacks.”

Building on security protocols already in place, tightened protection measures include increased action to check the identity of people entering church compounds by car, metal detectors used as people go in for services, and a beefed-up armed presence at church entrances.

Mr. Christopher warned that the security outlook for more moderate Muslims was also of concern, saying: “Among peaceful and progressive [Muslim] communities there will also be fear but those with a militant mind-set are happy that the Taliban are back in power again.”

His comments come at a time of fear for the safety of what remains of Afghanistan’s Christian community, those unable to be part of last week’s mass evacuation of the most at-risk people, mainly non-indigenous groups.

Taliban fighters have allegedly gone house-to-house to track down Christians and other minorities and there were reports of people being ordered to hand over their phones with the threat of being killed on the spot if their devices were found to contain Bible verses or devotional material.

Former US international religious freedom ambassador Sam Brownback warned of genocide against Christians and other minorities in Afghanistan. He said: “It’s a deadly and catastrophic situation and could easily lead to genocide.”

See on YouTube the conference organized by Human Rights Without Frontiers at the Press Club in Brussels on 9 September: https://www.youtube.com/watch?v=y9gj9vdx9Wo&t=36s