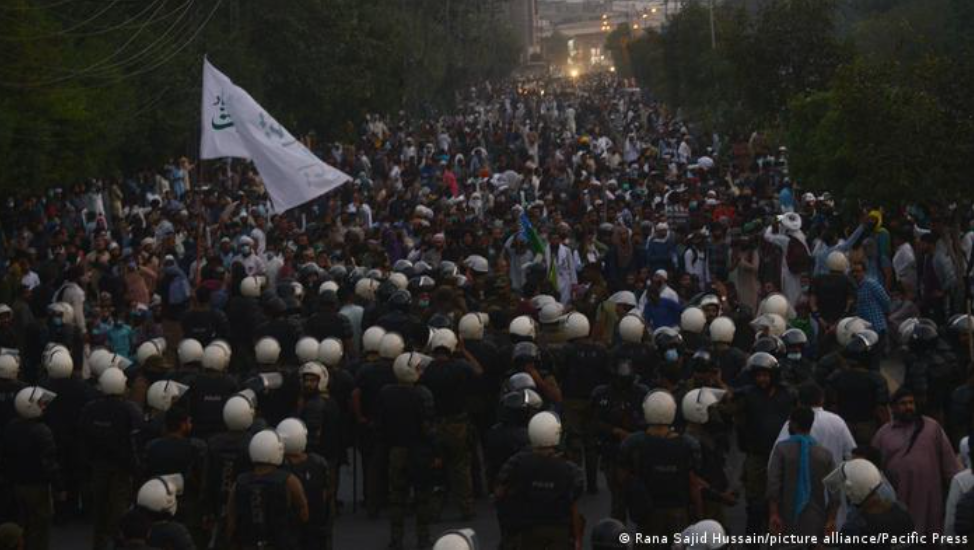 The far-right Tehreek-e-Labbaik party has called off a march on the capital, and the government has said allowing the party back into the political mainstream is in the “national interest.”

DW News (08.11.2021) – https://bit.ly/2YxBVch – Pakistan ended its prohibition of the radical Islamist Tehreek-e-Labbaik (TLP) on Sunday, one year after violent protests led to a government crackdown against the party.

The lifting of the ban followed an agreement reached between the party and Prime Minister Imran Khan’s government that TLP would call off its proposed march to the capital, Islamabad.

The government defended its decision by saying it was in the “larger national interest” as a means to prevent future violence from the extremist group.

Why was Tehreek-e-Labbaik banned in the first place?

The initial ban followed violent protests led by the TLP in response to the republication of caricatures of the Muslim Prophet Muhammad in the satirical French magazine Charlie Hebdo.

The TLP called for the expulsion of the French envoy, which Islamabad agreed to but ultimately did not carry out.

The leader of the hard-line conservative party, Saad Rizvi, was arrested and charged under the anti-terrorism act in the wake of the protests.

The TLP gained prominence in Pakistan’s 2018 election when it vowed to defend the country’s blasphemy law, which calls for the death penalty for anyone who insults Islam.

What is the current state of relations between Pakistan and the TLP?

The government’s agreement to lift the ban — and to release Rizvi — came as the TLP piled up the pressure.

Thousands of supporters clashed with police in late October as they began their “Long March” from Lahore to Islamabad, nearly 300 kilometers (186 miles) away.

In line with the agreement, the TLP is supposed to formally call off its march. But many supporters planned to maintain a sit-in until the government follows through on its promise to release Rizvi. Last week, Pakistani authorities released over 1,000 detained members of the party.

Interior Minister Sheikh Rashid Ahmed said that a proposal to expel France’s envoy would be discussed in parliament. However, he has also stated that Pakistan cannot afford to damage its relations with the EU by carrying out such an act, news agency EFE reported.

Photo : Tehreek-e-Labbaik have not yet officially called off their ‘Long March’ on Islamabad – Rana Sajid Hussain/picture alliance/Pacific Press