PAKISTAN: Outcry in Pakistan over beheading of ex-ambassador’s daughter 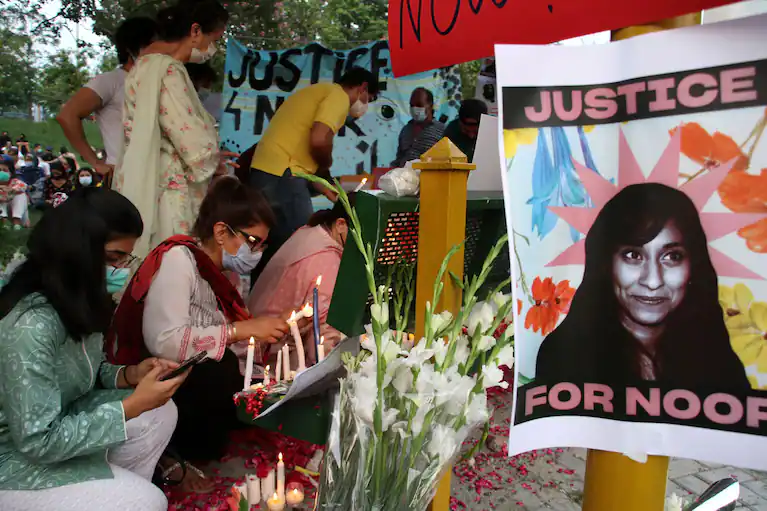 PAKISTAN: Outcry in Pakistan over beheading of former ambassador’s daughter

The Washington Post (27.07.2021) – https://wapo.st/3leNgqF – The name Noor Mukadam has ricocheted through Pakistani news and social media since the 27-year-old daughter of a former Pakistani diplomat was found beheaded at home in an upscale part of Islamabad, renewing attention on the country’s paltry record of addressing violence against women.

Police arrested suspect Zahir Zakir Jaffer at the site the night of the attack on July 20. Police on Saturday jailed his mother and father, reportedly a wealthy businessman, as well as two household staff members, who are accused of serving as accomplices and trying to hide evidence, according to Pakistan’s Dawn newspaper.

The shocking details of Mukadam’s killing — her beheaded body showed signs of torture and stabs — has stirred anger in Pakistan and diaspora communities, which have held vigils and rallied around her online.

Her death has also renewed calls for police and politicians to prioritize pursuing justice for victims like Mukadam, notably by strengthening the country’s limited domestic violence laws, the first of which was passed in 2013.

“Another day. Another woman brutally killed. Another hashtag. Another trauma. Another (likely) unsolved case. Another trigger. Another fear fest,” Meesha Shafi, a Pakistani actress and singer, wrote on Twitter after Mukadam’s death.

While police acted swiftly in arresting a suspect, some have questioned whether, without Mukadam’s social capital as a former diplomat’s daughter in an upscale neighborhood, her plight would have reached the public’s radar.

“Noor’s horrific murder is a test for a system that too easily bends to power and influence,” columnist Fatima Bhutto, the niece and granddaughter of two former Pakistani prime ministers, wrote on Twitter. “But it must also be a test for us — imagine the number of men who inflict such brutality on women every day without being seen, without being noticed, because the victims are poor & unknown.”

Legislation to tighten protections for women against violence has frequently faced pushback from religious and community leaders in the socially conservative country, which is governed in part by a strict interpretation of Islamic law. Pakistan ranked 164th out of 167 countries in Georgetown University’s Women, Peace, and Security Index in 2019, the latest year for which statistics are available.

In 2016, following the killing of social media star Qandeel Baloch by her brother, Pakistan’s Parliament passed a law closing a loophole concerning so-called honor killings, or the murder of females by family members for allegedly shameful acts. The law previously allowed the victim’s family to pardon the assailant.

Jaffer, a dual Pakistani-U.S. citizen, was reportedly an acquaintance of Mukadam. The exact motive for and circumstances of his alleged attack remain unclear.

Jaffer had previously been deported from Britain for involvement in a rape and sexual harassment case, Pakistani police told Dawn.

Mukadam’s father, Shaukat Ali Mukadam, served as Pakistan’s ambassador to South Korea and Kazakhstan. The family also lived for a time in Dublin, where acquaintances fondly remembered and paid tribute to Mukadam after her death, the Irish Times reported.

“I am disgusted to learn the details of what happened to Noor Mukadam,” she wrote. Jamil added “that this level of violence no longer surprises me considering the ongoing violence against women in Pakistan and India.” She urged “men in the public eye to speak out about this.”

Despite the uproar over Mukadam’s killing, journalist Arifa Noor, writing in Dawn, said she doubted that any major overhaul of police work and other protections for women would follow. Already, she said, there are questions about whether police collected sufficient evidence from the crime scene, which would be crucial in any subsequent trial.

“Individual cases can put state organisations under pressure and be seen as ‘test cases’ or ‘watershed moments’ but they may not prove sufficient to change the unspoken function of the police and how it is expected to perform — even in urban centres,” she wrote.