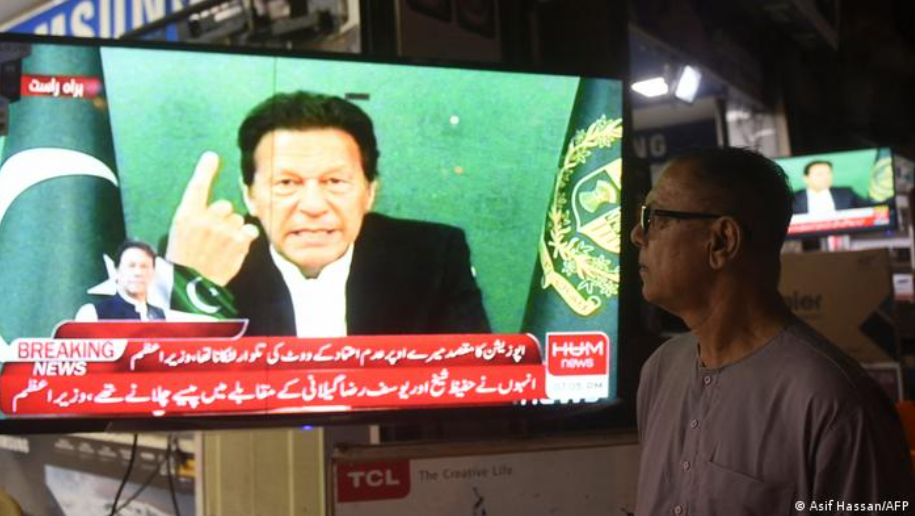 Pakistan is setting up a new religious body as part of efforts to push for an “Islamic welfare state.” But activists warn that the new authority could jeopardize the lives of women and religious minorities.

DW (15.10.2021) – https://bit.ly/3vqruTQ – The Pakistani government has signed an ordinance for the establishment of the Rehmatul-lil-Alameen Authority (RAA) religious body, triggering fears that it could further empower the country’s influential clerics and undermine the rights of women and religious minorities.

President Arif Alvi on Thursday issued the ordinance on the establishment of the RAA. The body will be composed of a chairman and six members, with Prime Minister Imran Khan as the patron-in-chief of the committee.

Khan had announced the government’s decision earlier this week, stating that the purpose of the authority was to teach the life of Prophet Muhammad to adults and children.

Khan said the body would monitor the curriculum and watch out for any “blasphemous” content being shared in the media, in school syllabi and on social media platforms.

Muhammad Iqbal Khan Afridi, a parliamentarian from the ruling party, welcomed the move, saying such a religious authority should have been set up long time ago.

“Imran Khan did a great service to religion by establishing this authority,” he said. “This is an Islamic country, and we want our syllabus, media, social media and laws to reflect the aspect of our religion.”

Awami Workers Party leader Shazia Khan told DW that the RAA might not only result in an uptick in extremists in Pakistan, but also put women and religious minorities under threat.

“If a woman expresses an unconventional view on any issue, she could instantly be declared a heretic by these clerics, jeopardizing her life,” Khan said.

“Minorities are already reluctant to express their views openly on social media because of the immense social influence of Pakistani clerics,” Jacob said. “Now this authority will further institutionalize their powers,” he added.

“Currently it is individual clerics who could point out any material on social media, dubbing it un-Islamic or blasphemous, but now the members of an authority might do it, creating an existential threat to not only minorities but also secular and liberal Pakistanis,” he said.

What other measures has Pakistan taken to reinforce religious bodies?

Pakistan already has a number of Islamic bodies with extended support from the government.

The Council of Islamic Ideology advises the government on whether it considers proposed laws Islamic or un-Islamic. The council is made up of Islamic clerics and scholars who advise Pakistani legislators.

In 2016, a chairman of the council told reporters that husbands can “lightly beat” their wives.

“If you want her to mend her ways, you should first advise her. … If she refuses, stop talking to her … stop sharing a bed with her, and, if things do not change, get a bit strict,” Muhammad Khan Sherani said, according to Pakistan’s Express Tribune newspaper.

If all else fails, he said, “hit her with light things like handkerchief, a hat or a turban, but do not hit her on the face or private parts.”

The council also stated that it was “un-Islamic” for women to leave abusive relationships and seek refuge in shelters.

A Shariah court has also been in existence for several years in Pakistan.

PM Khan is ‘pushing Pakistan on his own’

“They don’t need to push him,” Hoodbhoy said. “He is pushing Pakistan on his own.”

Hoodbhoy said Khan had set up the religious body to revamp his public image and to be remembered as a protector of Islam like the historical figure Saladin.

Khan has also announced that Pakistan would set up a TV channel in collaboration with Turkey and other Islamic countries to counter Islamophobia. In May, he laid the foundation stone of the spiritual Al-Qadir University in Sohawa in Jhelum district.

Khan’s wife, Bushra Bibi, inaugurated an e-library dedicated to research on Sufis, saints and mystics in Lahore. The Punjab government launched scholarships for national and international students to carry out research on religious subjects.

Lahore-based lawyer Abida Chaudhry said that, as religious bodies gain power throughout Pakistan, social and economic development are being undermined.

“This new authority would also be stuffed with conservative clerics,” Chaudhry said. “On the one hand, the government is drastically slashing budgets for health, education and social security, and, on the other, religious bodies that have no justification in the 21st century are being formed.”

She said the government should address inflation, increase its budget for education, improve the health system and provide shelter for the homeless.

“And please do not drag religion into state affairs,” Chaudhry said. “Let it be a matter of an individual and focus on social securities.”