PAKISTAN: It is time for the EU to question the GSP+ status granted to Pakistan 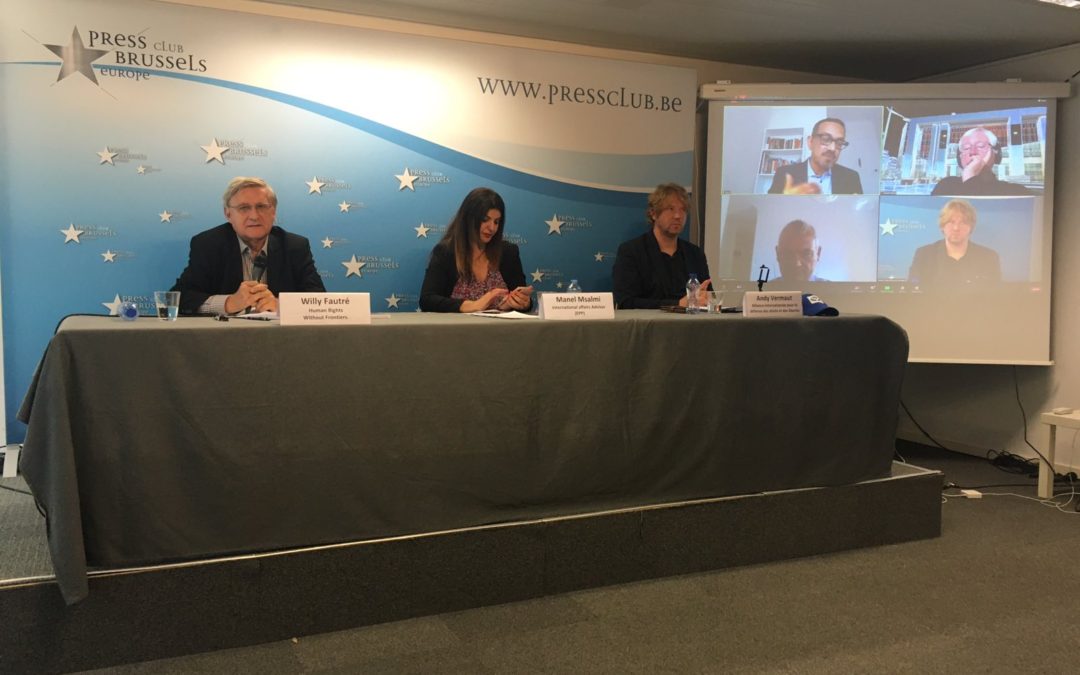 Moreover, EU member states fail to provide a safe haven to a Christian couple arrested in 2013, sentenced to death in 2014 and acquitted for lack of evidence in June 2021

HRWF (28.07.2021) – The blasphemy laws in Pakistan are used and abused by extremist Islamic groups to persecute members of non-Muslim minorities and whoever tries to combat this religiously motivated instrumentalization is at risk of losing his life, a panel of experts said at a zoom conference organized by AIDLR (Alliance Internationale pour la Défense de la Liberté Religieuse) at the Press Club in Brussels on 27 July.

“The blasphemy laws of Pakistan, while purporting to protect Islam and the religious sensitivities of the Muslim majority, are vaguely formulated and arbitrarily enforced by the police and the judiciary; as such they permit abuse, harassment and persecution of minorities in Pakistan,” declared AIDLR’s representative and organizer Andy Vermaut in his introduction. “Muslim human rights activists, lawyers and judges in Pakistan have also been killed by the hand of Islamic extremists,” he added.

Presentation of HRWF’s director: EU member states deaf to calls for asylum from Christians in Pakistan

HRWF has a database of thousands of documented cases of FORB prisoners in the world, including 47 cases of believers of all faiths in Pakistan who are currently in jail on blasphemy charges often misused as personal settlements of scores: 26 Christians – 15 Sunni Muslims – 5 Ahmadis and 1 Shia Muslim.

16 have been sentenced to death

16 have been sentenced to life imprisonment

4 cases: the status of the prisoner is unknown.

The case of Asia Bibi who was sentenced to death by hanging in 2010 and was finally acquitted for lack of evidence by the Supreme Court of Pakistan after spending many years on the death row is well known.

When she was released, she went into hiding to avoid being killed by extremist groups.

She tried to apply for asylum in France and other EU member states but to no avail. She was finally welcome in Canada.

Another recent case of biased judgment in Pakistan denounced by EU institutions presents some similarities with Asia Bibi’s experience.

On 10 February 2021, three members of the EP Intergroup on FORB – Peter van Dalen (EPP), Bert-Jan Ruissen (ECR), Joachim Kuhs (ID) – filed a written parliamentary question addressed to Josep Borrell, High Representative/ Vice President of the Commission, in which they raised the issue of a Christian couple, Shafqat Emmanuel and Shagufta Kausar, sentenced to death and being arbitrarily denied an appeal since 2014.

On 15 April 2021, the Vice-president of the Commission answered:

The Head of the EU Delegation in Pakistan and the EU Special Representative on Human Rights have already raised the case of Shafqat Emmanuel and Shagufta Kausar with Pakistani authorities at the highest levels.

On 29 April 2021, the European Parliament adopted a Resolution on Blasphemy Laws in Pakistan, in particular the case of Shagufta Kausar, a caretaker in a Christian school, and her husband Shafqat Emmanuel, partly paralyzed, saying in its very first point:

“whereas Shagufta Kausar and Shafqat Emmanuel, a Christian couple, were imprisoned in 2013 and sentenced to death in 2014 for blasphemy; whereas they have been accused of sending “blasphemous” text messages to a mosque cleric insulting the Prophet Muhammad, using a sim card registered in Shagufta’s name; whereas both the accused have consistently denied all allegations and believe that her National Identity Card was purposely misused;

Strongly condemns the imprisonment and sentencing of Shagufta Kausar and Shafqat Emmanuel, as well as the continued delay of their appeal hearing;

calls on the Pakistani authorities to immediately and unconditionally release them, and to provide them and their lawyer adequate security now and upon release;

calls on the Lahore High Court to hold the appeal hearing without delay and to strike down the verdict in accordance with human rights;”

681 members of the European Parliament voted in favor of the resolution: only three MEPs opposed it.

It seems that the pressure exerted by the EU institutions was finally successful as the Christian couple who had spent eight years in prison was released a month and a half later, on 3 June 2021. They now live in hiding for their security as Asia Bibi had to do.

Looking for a safe haven in Europe

As Asia Bibi, they thought that the EP Resolutions highlighting their plight would facilitate their request for a visa to an EU member state as they urgently needed a safe haven for their own security. But the Christian couple have not received any proposal from them and their applications for a visa through various European embassies have mostly remained unanswered or have been turned down because they are in hiding, they have no job and no proof of income. The diplomatic missions could have proposed them an alternative process to get asylum but they did not.

As of the end July, the German embassy is the only one to have officially answered Shagufta Kausar and Shafqat Emmanuel but they said they could not be of any assistance:

“This possibility is narrowly limited to exceptional cases (“singular individual fates”) that are of particular exemplary political significance, e.g. persons who have been active in human rights or opposition work in a particularly outstanding and long-standing manner and are thus directly exposed to a massive threat to their physical integrity and can sustainably avoid such a threat solely by being admitted to Germany.”

The only way to ask for political asylum would be to illegally cross several borders and arrive in an EU country where they could apply for asylum but they do not envisage such a dangerous solution.

Again, in this case, EU member states are failing to concretely help persecuted Christians looking for a safe haven and turn a deaf ear to their requests. They are neither proactive nor reactive while what is required is action and not talk.

The GSP+ is at stake: Values first and Business second

Up to now Pakistan has ignored the repeated appeals of the UN, the EU institutions, the USA, the UK and other countries to ensure the necessary safeguards are in place to prevent the abuse of the blasphemy laws.

In 2014, Pakistan entered the Generalised Scheme of Preferences Plus (GSP+) granting a number of commercial privileges, such as the access to the EU market without import duties if… human rights are respected.

Despite continuing violations of human rights, including religious freedom, the European Commission certifies that Pakistan remains eligible for the scheme.

In the 10 February 2021 written parliamentary question mentioned before, the three MEPs asked Josep Borrell, among other things,  if the VP/HR was “considering ending the Generalised Scheme of Preferences Plus preferences for Pakistan? If not, why not?”

“the High Representative/Vice-President brought up the implementation of the 27 international conventions covered by the Generalised Scheme of Preferences Plus (GSP+) in the fifth EU-Pakistan Strategic Dialogue with Foreign Minister Qureshi on 3 November 2020.

This included explicit concerns regarding the death penalty and misuse of blasphemy legislation. Most recently, the EU reiterated its messages in this regard to Pakistan, on 2 March 2021, in the Sub Group on Trade of the EU-Pakistan Joint Commission.”

He then put the emphasis on alleged progress in other human rights areas that are highly questionable as the extent of the related violations has not decreased since 2019:

“The 2018-2019 Report on the Generalised Scheme of Preferences (GSP) shows that Pakistan is making progress over time in areas such as the elimination of honour killings, the protection of transgender persons, and the protection of women’s and children’s rights.

However, a number of shortcomings still remain. The report includes reducing the scope for the death penalty as one of the priority areas for action. The EU will continue to closely monitor, address and encourage further progress on these issues.”

“A temporary withdrawal of GSP preferences would be a measure of last resort when all other actions fail.”

Concretely, it means that the suspension of the GSP+ is not on the agenda of the European Commission although numerous reports prove that the implementation of human rights in Pakistan has not made any substantial progress and has even regressed on a number of issues. In addition, the understanding and the interpretation of “when all actions fail” in Borrell’s answer can be easily abused for years to keep the GSP+ in place.

However, it would be an unfortunate missed opportunity for the EU to fail to show its teeth and to be at the spearhead of a robust initiative right now.

Indeed, on 2 December last, the State Department redesignated Pakistan as a CPC (Country of Particular Concern) under IRFA (International Religious Freedom Act) , but again issued a waiver on any related sanctions, “as required, in the ‘important national interest of the United States.’”

Pakistan can sleep on both ears if the EU fails to put its words and values into action.

Business first should be replaced on its agenda by Values first and Business second.