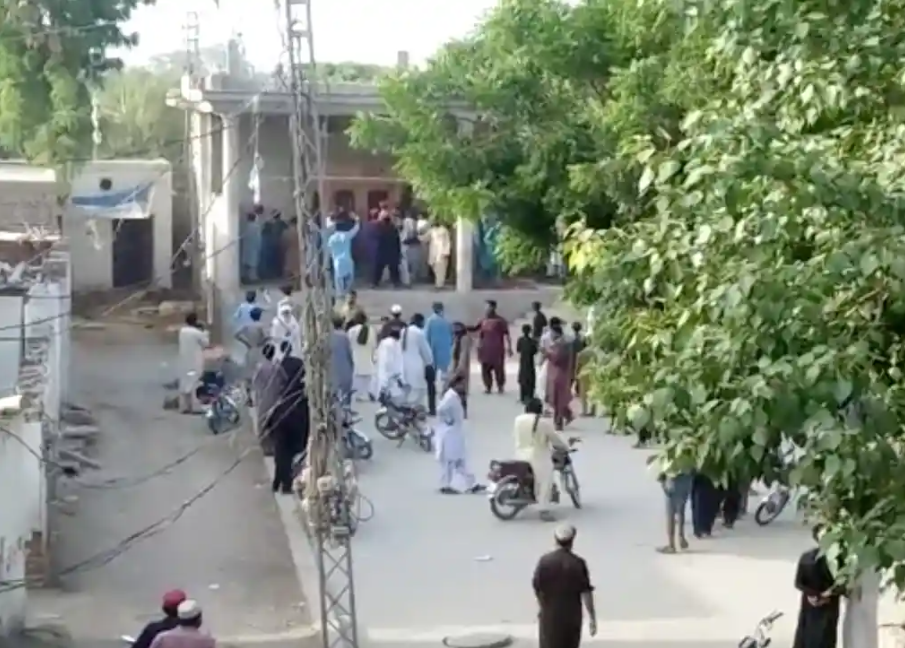 The Guardian (09.08.2021) – https://bit.ly/3CyJMFL – An eight-year-old Hindu boy is being held in protective police custody in east Pakistan after becoming the youngest person ever to be charged with blasphemy in the country.

The boy’s family is in hiding and many of the Hindu community in the conservative district of Rahim Yar Khan, in Punjab, have fled their homes after a Muslim crowd attacked a Hindu temple after the boy’s release on bail last week. Troops were deployed to the area to quell any further unrest.

On Saturday, 20 people were arrested in connection with the temple attack.

The boy is accused of intentionally urinating on a carpet in the library of a madrassa, where religious books were kept, last month. Blasphemy charges can carry the death penalty.

The Guardian knows the name of the boy and family members, but has chosen to protect their identities for their safety.

Speaking from an undisclosed location, a member of the boy’s family told the Guardian: “He [the boy] is not even aware of such blasphemy issues and he has been falsely indulged in these matters. He still doesn’t understand what his crime was and why he was kept in jail for a week.

“We have left our shops and work, the entire community is scared and we fear backlash. We don’t want to return to this area. We don’t see any concrete and meaningful action will be taken against the culprits or to safeguard the minorities living here.”

Blasphemy charges filed against a child have shocked legal experts, who say the move is unprecedented. No one this young has ever been charged with blasphemy before in Pakistan.

Blasphemy laws have been disproportionately used in the past against religious minorities in Pakistan. Although no blasphemy executions have been carried out in the country since the death penalty was introduced for the crime in 1986, suspects are often attacked and sometimes killed by mobs.

Ramesh Kumar, a lawmaker and head of the Pakistan Hindu Council, said: “The attack on the temple and blasphemy allegations against the eight-year-old minor boy has really shocked me. More than a hundred homes of the Hindu community have been emptied due to fear of attack.”

Kapil Dev, a human rights activist, said: “I demand charges against the boy are immediately dropped, and urge the government to provide security for the family and those forced to flee.”

He added: “Attacks on Hindu temples have increased in the last few years showing an escalating level of extremism and fanaticism. The recent attacks seem to be a new wave of persecution of Hindus.”

Footage circulating on social media appears to show an angry mob attacking and vandalising the temple with iron bars and sticks last week.

Ahmad Nawaz, a spokesperson for the Rahim Yar Khan district police, said: “Police are hunting the attackers and police teams are conducting raids to arrest the culprits but there has been no arrest made yet.”

Pakistan’s prime minister, Imran Khan, condemned the mob attack on Twitter and said he has ordered the provincial police chief to take action against anyone involved, including negligent police officers. He promised the government would restore the temple.

In New Delhi, India’s external affairs ministry summoned a Pakistani diplomat to protest the attack and demand the safety of Hindu families living in Muslim-majority Pakistan.

According to a report by the US Commission on International Religious Freedoms, published last year, Pakistan reported the highest number of incidents of mob activity, mob violence, and/or threats of mob violence as a result of alleged blasphemous acts.

Four countries account for nearly 80% of all reported incidents of mob activity, mob violence, and/or threats of mob violence as a result of alleged blasphemous acts in countries with criminal blasphemy laws between 2014 and 2018.

Photo: People gather outside a Hindu temple that was set on fire by a mob after reports that a Hindu boy had urinated in the library of an Islamic seminary, in Bhong, Pakistan 4 August 2021. Photograph: Obtained By Reuters/Reuters