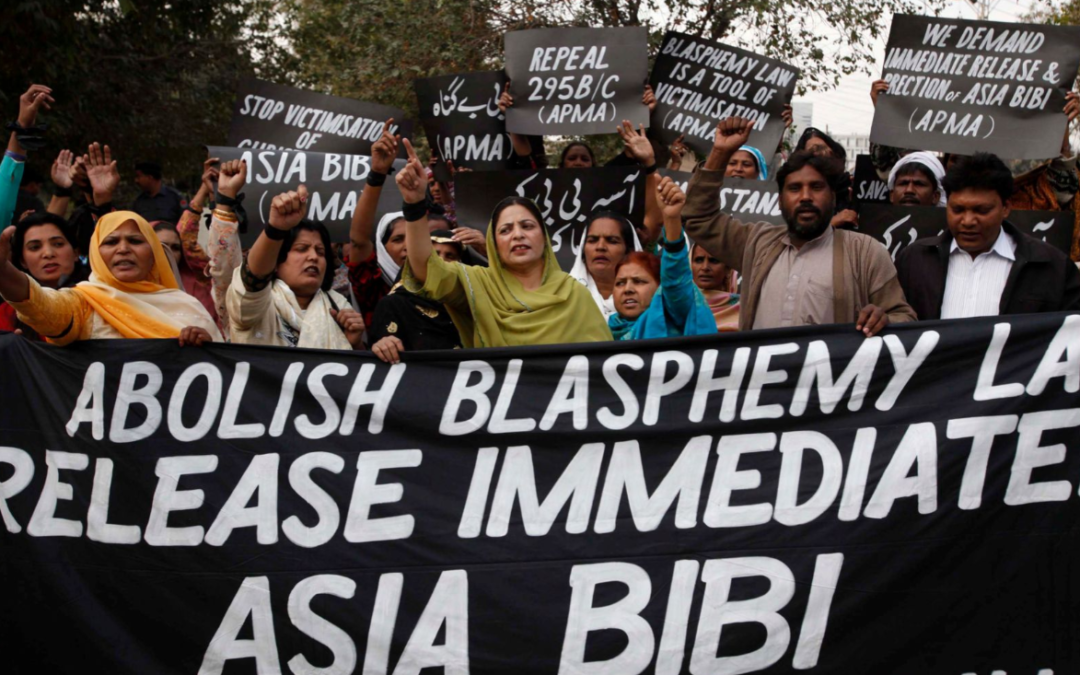 EU Reporter (29.07.2021) – https://bit.ly/3lb6Hk1 – A conference on Pakistan’s controversial blasphemy laws was told that the legislation has been equated to ethnic cleansing. The blasphemy laws, while purporting to protect Islam and the religious sensitivities of the Muslim majority of Pakistan, are “vaguely formulated and arbitrarily enforced by the police and the judiciary”. As such they permit, even invite, abuse and the harassment and persecution of minorities in Pakistan, the event at Brussels press club was told.

But, despite such concerns, the European Union is “failing to help” victims and pressure must be put on Pakistan to repeal its laws. The conference on Pakistan’s highly controversial and widely condemned blasphemy laws, took place under the auspices of the Alliance internationale pour la défense des droits et des libertés.

The legal basis of the blasphemy law, the use of the laws to justify ethnic cleansing and the particular effects on females were all discussed. Opening the debate, Paulo Casada, a former MEP, founder and executive director of the South Asia Democratic Forum, said: “This is a very important topic and one we have been dealing with for a long time. People are being accused of blasphemy without any foundation at all. This results from attacks on lawyers and the quite fanatical and absurd atmosphere in the country.

“The EU needs to do more to highlight this issue which has got worse, not better.”

Jürgen Klute, former MEP and a Christian theologian, said: “I think Christianity and Islam have a lot in common: the belief that you have to appear in front of divine judgement at the end of your time so we must strongly argue against these blasphemy laws. How can a human being decide or estimate what a blasphemy is? You have to leave such decisions to your God. We can argue against these laws on human rights grounds and also religious grounds.”

Manel Msalmi, international affairs Advisor of MEPs of the European Peoples’ Party in the European Parliament, said: “The parliament and significantly the commission and council have each condemned persecution in Pakistan.Hundreds have been charged under these laws which seek to limit speech which could be seen as offensive. These laws have always been a problem but the situation has got worse. It is important to note that such laws are being used against religious minorities in states like Pakistan. Such attacks are also common online particularly against journalists. Pakistan has even called for the introduction of such laws in other Muslim countries with a boycott of states where blasphemy happens. This practice goes hand in hand with targeting religious groups. Human rights are being abused in Pakistan.”

Another keynote speaker, Willy Fautré, director, Human Rights Without Frontiers, thanked the organizers for highlighting the issue. He focused be on the case of a Christian couple imprisoned since 2013 on blasphemy charges before being declared innocent by the Supreme Court of Pakistan and released a few months ago. Despite a resolution of the European Parliament in April focusing on their case, no EU country is ready to grant them political asylum.

He said that in the HRWF database of FORB prisoners, “we have documented 47 cases of believers of all faiths in Pakistan who are in jail on the basis of the blasphemy laws.” These include 26 Christians, 15 Sunni Muslims, 5 Ahmadis and 1 Shia Muslim. Fautre added: “There are certainly more.”

She tried to apply for asylum in France and to other EU member states but to no avail. She was finally welcome in Canada. Fautre said: “I would like here to focus on this point.”

On 29 April 2021, the European Parliament adopted a resolution on blasphemy laws in Pakistan, in particular the case of Shagufta Kausar and Shafqat Emmanuel, saying in its very first point:“Whereas Shagufta Kausar and Shafqat Emmanuel, a Christian couple, were imprisoned in 2013 and sentenced to death in 2014 for blasphemy; whereas they have been accused of sending “blasphemous” text messages to a mosque cleric insulting the Prophet Muhammad, using a sim card registered in Shagufta’s name; whereas both the accused have consistently denied all allegations and believe that her National identity card was purposely misused.”

The European Parliament said it “strongly condemns the imprisonment and sentencing of Shagufta Kausar and Shafqat Emmanuel, as well as the continued delay of their appeal hearing; calls on the Pakistani authorities to immediately and unconditionally release them, and to provide them and their lawyer adequate security now and upon release; calls on the Lahore High Court to hold the appeal hearing without delay and to strike down the verdict in accordance with human rights”.

Some 681 MEPs voted in favour of the resolution and only three MEPs opposed it. Fautre added: “The Christian couple was finally released after spending 8 years in prison. They live in hiding for their security.They would now like to find a safe haven in an EU member state but they have not received any proposal from them and their applications for a visa through various European embassies have mostly remained unanswered or have been turned down because they are in hiding for their safety, they have no job and no proof of income. The diplomatic missions have not proposed them an alternative process to get aslum.”

He told the conference: “Up to now, Germany was the only embassy to officially answer Shagufta Kausar and Shafqat Emmanuel but they said they could not be of any assistance. This possibility is narrowly limited to exceptional cases that are of particular exemplary political significance, for example, persons who have been active in human rights or opposition work in a particularly outstanding and long-standing manner and are thus directly exposed to a massive threat to their physical integrity and can sustainably avoid such a threat solely by being admitted to Germany.

“The only way to ask for political asylum would be to illegally cross several borders and arrive in an EU country where they could apply for asylum. They do not envisage such a dangerous solution.

“Again, in this case, EU member states are failing to concretely help persecuted Christians looking for a safe haven and turn a deaf ear to their requests. They are neither proactive nor reactive. Their obstacle race which started in 2013 in Pakistan is far from over.

“General Pervez Musharraf succeeded Zia with the support of the US and its allies. Musharraf not only failed to bring change in the country’s blasphemy laws, he also allowed extremist groups to continue working under new names.”