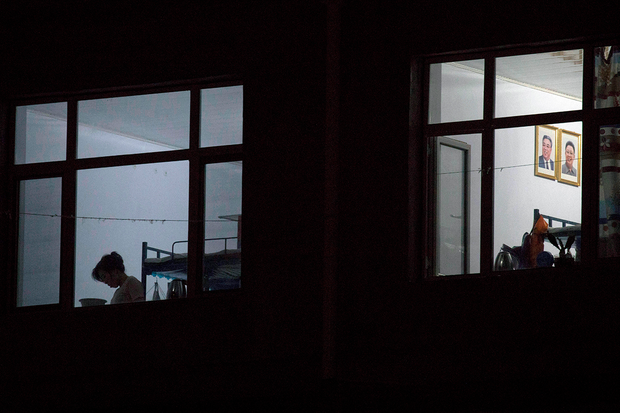 Many of the workers became stranded at the end of their China stint due to coronavirus and have not seen their families in years.

Radio Free Asia (23.06.2021) – https://bit.ly/2UCub6i – North Korea is planning to repatriate 10,000 workers dispatched to earn foreign currency in China but were stranded by the coronavirus pandemic, replacing them with younger recruits, sources in China told RFA.

One of North Korea’s chief foreign currency sources is to dispatch workers overseas, then collect the lion’s share of their salaries.

North Korean labor exports were supposed to have stopped when United Nations sanctions froze the issuance of work visas and mandated the repatriation of North Korean nationals working abroad by the end of 2019.

The sanctions are aimed at depriving Pyongyang of cash to fund its prohibited nuclear weapons and missile programs.

Though many North Koreans returned home prior to the deadline, some were allowed to remain until their three-year visas were to expire in early 2020.

But in January 2020, Pyongyang and Beijing closed the Sino-Korean border to stop the spread of coronavirus, making a return home impossible.

“The North Korean workers here in Dandong are expected to be replaced soon. An acquaintance of mine who works for a company that employs North Koreans confirmed that some of the workers are cycling out,” a Chinese citizen of Korean descent, from the Chinese border city that lies across the Yalu River from North Korea’s Sinuiju, told RFA’s Korean Service June 20.

“The North Korean authorities will select about 10,000 workers from among those who have been waiting to go home for a long time but were stranded here due to the coronavirus pandemic,” said the source, who requested anonymity for security reasons.

According to the source, most of the workers who will be replaced are married women in their 40s who have not seen their families in North Korea since they left before the pandemic. Others who are being swapped out include workers of retirement age.

“The workers on the withdrawal list were scheduled to return home after their three-year visa expired at the end of 2019. But due to the sudden onset of the pandemic, they have been stuck in China and unable to find suitable employment. They have been working in whatever industry, doing whatever job they could find,” the source said.

“Meanwhile, the companies that hire North Koreans wanted to replace these workers due to various problems, but replacement was held up when the border closed. But earlier this month the North Korean embassy in Beijing ordered HR companies to come up with a list of 10,000 workers to send back,” said the source.

Some of these workers arrived in China as early as 2016, so they have been away from their families for more than five years, according to the source. Others reached retirement age while they were stranded in China.

“They were actually paid only 300 yuan (U.S. $46) of the 2000 yuan ($308) monthly wage paid out by the Chinese companies under contract. But even this money was not given to them and only recorded in the books of the North Korean HR company. The HR company promised to pay the entirety of their owed balance when they return home, but we’ll have to wait and see if that happens,” said the source.

Though the workers are only getting 20 percent of what they earned, with the rest going to the government, they are still receiving about 70  times the North Korean monthly government salary, which according to the South Korea-based Korea Joongang Daily newspaper amounted to about 4,000 won ($0.66) in 2018.

Another source, also from Dandong, confirmed to RFA June 21 that he heard news that North Korea would send 10,000 younger workers to replace the returning ones.

“The North Korean workers on the withdrawal list are expected to return home through Dandong Customs soon,” said the second source, who requested anonymity to speak freely.

“The workers welcome the return measures. Because of the closed border, many have been living here without knowing how their families are doing back in North Korea,” the second source said.

How they will return home—whether by train, bus or on foot—is unknown, according to the second source.

“Even in the midst of the international sanctions on North Korea, the 10,000 among the many tens of thousands of North Korean workers who are still earning foreign currency in the Dandong area will be replaced,” the second source said.

“Their entry into North Korea will be of great interest.”

The 10,000 workers who will return to North Korea have already been vaccinated against COVID-19 and will be authorized for return only after testing negative for the virus, the second source said.

About 30,000 North Korean workers in Dandong are employed in industries including textiles, electronics, accessories, and quarantine products manufacturing, as well as seafood processing and agriculture.

Though sanctions prohibit North Korea from sending workers overseas and preclude countries from issuing work visas to North Koreans, Pyongyang has been known to dispatch workers to China and Russia on short-term student or visitor visas to get around sanctions.