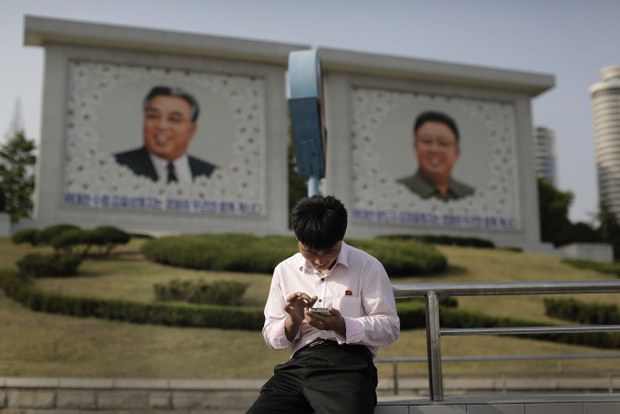 Starving families risk their lives to contact relatives from abroad to receive remittances.

Radio Free Asia (16.06.2021) – https://bit.ly/3xQWTip – North Korea has recently begun a harsh crackdown on international phone calls to South Korea and China, which hard-pressed residents of areas near the Chinese border rely on as channels for remittances from relatives in exile, sources in the country told RFA.

But the government decided recently that such activity is a crime against socialism and the state and ordered the State Security Department to put a stop to it.

As food shortages brought on by the coronavirus pandemic have taken their toll on the city of Hyesan in the central northern province of Ryanggang, more and more residents there are willing to take the risk of calling on their contacts on the outside for money.

A resident of the city told RFA’s Korean Service June 9 that the crackdown, under the supervision of the Ministry of State Security, started last month and appears to be more thorough than previous campaigns.

“They are not only using security agents, but even students in the graduating class of the security college, so that this will be the strictest crackdown ever,” said the source, who requested anonymity for security reasons.

Because the students are unknown in the community, they are more effective than the regular agents.

“No one knows the identity of the security college seniors or how many were sent to each area of Hyesan. The reason why the Ministry of State Security selected only the students who were about to graduate is to encourage a fierce competition among them,” said the source.

“If they get good results by catching a lot of illegal phone users, they will be assigned to higher-level organizations before their peers,” the source said.

The people of Ryanggang, like most other parts of the country, have suffered under the depressed economic conditions caused by the COVID-19 pandemic. In Jan. 2020, Beijing and Pyongyang closed the 880-mile Sino-Korean border and suspended all trade.

Because of North Korea’s dependence on trade with China, commerce came to an abrupt halt, factories closed down due to lack of materials, and food and fuel shortages became more pronounced.

Some residents have been able to weather the storm by arranging for money to be sent from abroad but now with the crackdown in full swing, they are left with two unfavorable choices, going hungry or risking punishment.

“The residents, who have been suffering from severe food shortages since the outbreak of the coronavirus, are ignoring the crackdown to continue to connect with the outside world,” said the source.

“Without their remittances, families here would starve to death, so they cannot help but contact their family members who live abroad,” the source said.

According to the source, the students in the crackdown are equipped with the latest wiretapping equipment and are sent to areas along the border to try to find illegal phone users.

“The residents continue to try to make phone calls even though they fear that they might die if they get caught. For them the help they receive from their family in the outside world is their last hope for survival.”

Another source, also a Hyesan resident, told RFA that the crackdown was “an unprecedented fearful wind,” and confirmed that students from the security college were deployed all over Ryanggang province.

“In the past, if you got caught making illegal calls to China or South Korea, you could avoid punishment by paying a fine or a bribe, but now since the crackdown, if they detect a call to South Korea or China, the phone brokers are sent to political prison camps and the callers are sent to labor camps, regardless of the reason for the call,” said the second source, who requested anonymity to speak freely.

The second source said that the food shortage in Hyesan was the worst since the Arduous March, a Korean term used to describe the 1994-1998 famine that killed millions, or as much as 10 percent of the population by some estimates.

“National rations have completely disappeared, and borders are closed due to the coronavirus outbreak. Many people have died of starvation. It’s just like the Arduous March,” the second source said.

“A resident who recently succeeded in making a call to South Korea said the risk was worth it because the whole family had been starving for several days and it was difficult to endure any longer,” the second source said.

Despite the harsh crackdown, the second source said people will continue to make illegal calls.

“Residents who are at the crossroads of life or death have no choice but rely on their family members in the outside world.”

According to a previous RFA report, authorities planned the crackdown after the government classified the act of making calls using illegal mobile phones or accepting money from North Korean refugees in South Korea as an ‘anti-socialist, anti-state criminal act’.

Sources in that report told RFA that authorities in May arrested 20 phone brokers from Hyesan who connected customers with North Korean refugees in South Korea or received money from them.

A North Korean refugee living in Seoul told RFA that her mother was arrested and under investigation for receiving money from her.

“I don’t know what to do. Until now, the money I have been sending from South Korea has allowed my family in North Korea to survive. But now I think about how the rest of the family will live. My mother has been caught and the remittance channel is completely blocked, so I can’t even sleep at night.”

While the exact number of illegal phone users in North Korea is unknown, the Database Center for North Korean Human Rights, which interviewed 414 North Koreans in the South, reported that 47 percent of them were in constant contact with their families in the North in 2018. Of those, about 93 percent said they called their families on the phone.

In the same survey, 62 percent said they had sent money to North Korea. Based on their answers, the center estimated that refugees in the South who send money to North Korea do it about twice per year, sending around 2.7 million South Korean won (U.S. $2,260) each time.

Each time they had to pay an average broker fee of almost 30 percent.

According to South Korea’s Ministry of Unification, more than 33,000 North Koreans have settled in South Korea since 1998, but only 229 did so last year due to travel restrictions in the countries along common escape routes during the pandemic.