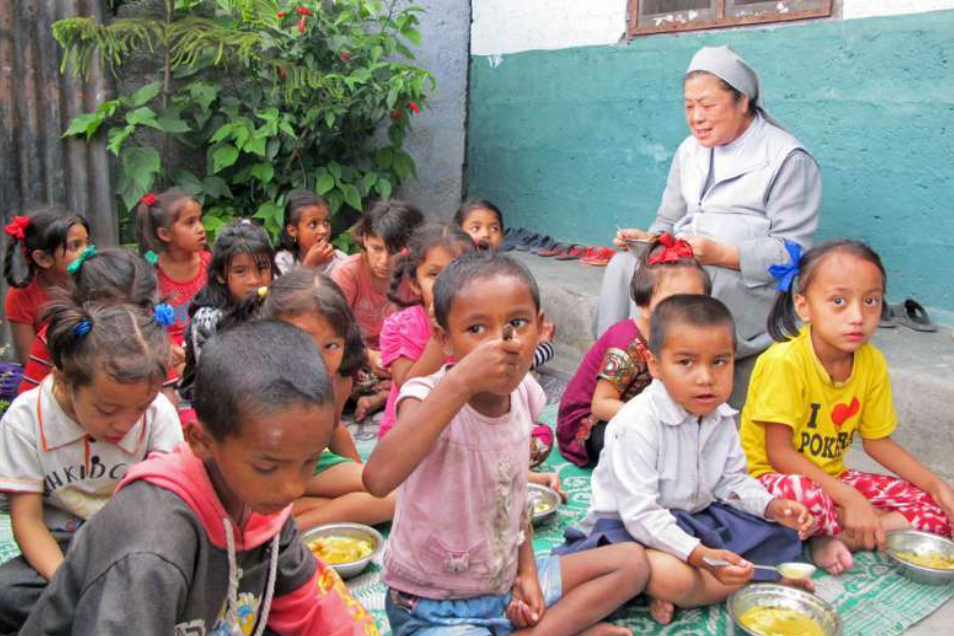 At least nine Christians, including pastors, are facing court cases over conversion claims in the Hindu-majority country

UCA News (27.10.2021) – https://bit.ly/3jMC1UW – Two Catholic nuns from South Korea have been detained in Nepal for more than six weeks after they were arrested on charges of converting Hindus by coercion and allurement.

Sister Gemma Lucia Kim and Sister Martha Park Byongsuk of the Sisters of St. Paul of Chartres congregation were arrested on Sept. 14 based on an anonymous complaint. They were kept in police custody until Sept. 27 when they were sent to the district prison after bail was denied.

The nuns work among poor slum children in Pokhara, about 200 kilometers from capital Kathmandu.

“The Catholic community of the country is shocked to hear about the verdict” of the court rejecting the bail application, Bishop Paul Simick, the apostolic vicar of Nepal, said in a statement to papal charity Aid to the Church in Need (ACN).

Bishop Simick expressed dismay over the arrest and bail denial of the elderly nuns.

“Despite all the assurances given to us that the sisters would be granted bail, the decision went against them,” said Bishop Simick, according to a report by Exaudi Catholic news website on Oct. 25.

Another church official, who requested anonymity, said that initially the hierarchy thought of not publicizing the arrests as it could lead to Hindu fundamentalists and Nepal’s anti-Christian media exaggerating facts.

“They will make their reports sound like the nuns were converting everyone in the guise of charity works,” he said.

Another two Koreans — a lay Catholic and a Protestant pastor — have also been arrested and detained on similar charges, the source said.

The bishop has visited the nuns and requested prayers for them during Sunday liturgy on Oct. 24.

The nuns have been managing Happy Home, a center that provides accommodation, food, education, medical services and skills training for about 120 slum children in Pokhara.

During the Covid-19 pandemic, they have distributed food rations to poor, vulnerable people. But some locals accused them of providing food to allure Hindus to become Catholics.

Bishop Simick said the allegations “of conversions are utterly baseless and unjust. This act reveals not only bigotry on the part of those who accused the sisters but also ignorance of the needs of the poor. We, as Catholics, do not indulge in forceful conversion and the Korean sisters are known for doing exclusively social work.”

He added: “The sisters have been dedicating themselves totally to the poor for so many years. Therefore, we would like to call for an in-depth inquiry into what happened.”

For decades, Christians have faced various levels of persecution in the Himalayan Hindu-majority nation.

About 81 percent of Nepal’s estimated 29 million people are Hindu, while Buddhists account for 9 percent, Muslims 4.4 percent and Christians 1.4 percent, according to the 2011 census.

There are about 10,000 Catholics in Nepal, church sources say. However, Protestants and Evangelical Christians are estimated to be 1.5 million, according to an official from Nepal Christian Society.

The World Database of Christians records Nepal’s Christian communities as one of the fastest growing in the world.

Christian groups and rights watchdogs have reported increasing hostility and persecution against Christians in Nepal in recent times.

B.P. Khanal, a prominent Christian writer and politician in Nepal, told UCA News in September that at least nine Christian men and women including pastors were facing court cases in Nepal on conversion charges.

ACN’s Religious Freedom Report 2021 documented a legal and social backlash against Christians following amendments to the country’s Penal Code in 2018 that bans proselytization and conversion to other faiths from Hinduism.

Christians including pastors and aid workers have been charged with conversion efforts, while foreign priests and nuns have been denied visas and forced to leave Nepal, ACN reported.

Photo : Sister Martha Park Byongsuk enjoys a midday meal with the children at St. Paul’s Happy Home in Pokhara Bus-Park slum in Nepal. She and her companion have been detained over religious conversion charges. (Photo: globalsistersreport.org)