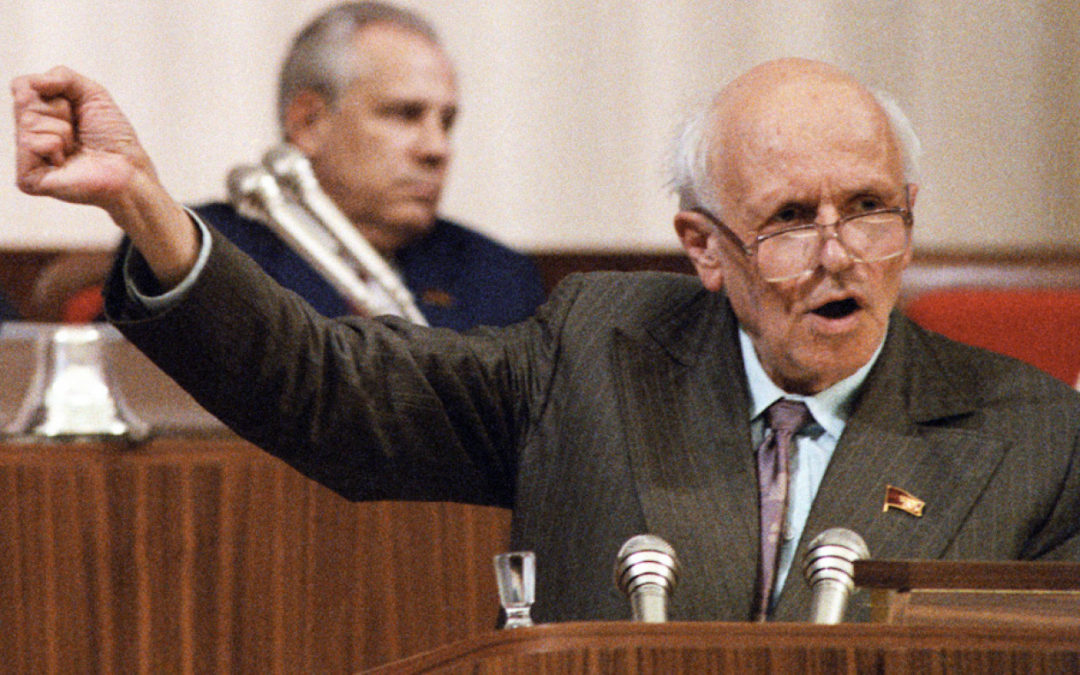 Proposed by the Moscow Sakharov Center, the exhibition was titled Andrei Dmitriyevich Sakharov: Anxiety and Hope.

It was planned to open on May 17, four days ahead of Sakharov’s 100th birthday, as a series of street displays in Moscow.

The proposed exhibition was meant to include photographs of Sakharov taken by Soviet and Russian photographers, as well as quotes from his memoirs, articles, and speeches.

Physicist, dissident, and Nobel laureate Andrei Sakharov addresses the Congress of People’s Deputies as Soviet President Mikhail Gorbachev looks on behind him in Moscow in December 1989.

The Moscow government’s Department of Culture announced on March 23 that it was ready to provide photo display stands for the exhibition.

But the Sakharov Center said a model of the exhibition that it sent to the Department of Culture had been rejected.

The organization, which has not received an official letter with a reason for the decision, says it is now seeking a formal explanation.

It said a representative from the Department of Culture first informed the Sakharov Center on April 30 that the content of the exhibition was unacceptable.

But the organization said it was given another reason for the rejection on May 14, when a representative of the department said the exhibition stands were needed for another project — an exhibition commemorating the Battle of Moscow, which took place from October 1941 to January 1942, and the May 9, 1945 World War II victory against Nazi Germany.

“We consider both the decision itself, whoever made it, and the wording of the refusal to be unconvincing and shameful,” a Sakharov Center statement said.

“Andrei Dmitriyevich Sakharov is not threatened with historical oblivion,” but officials in Moscow are trying to “fence off the legacy of one of their best sons,” it said.