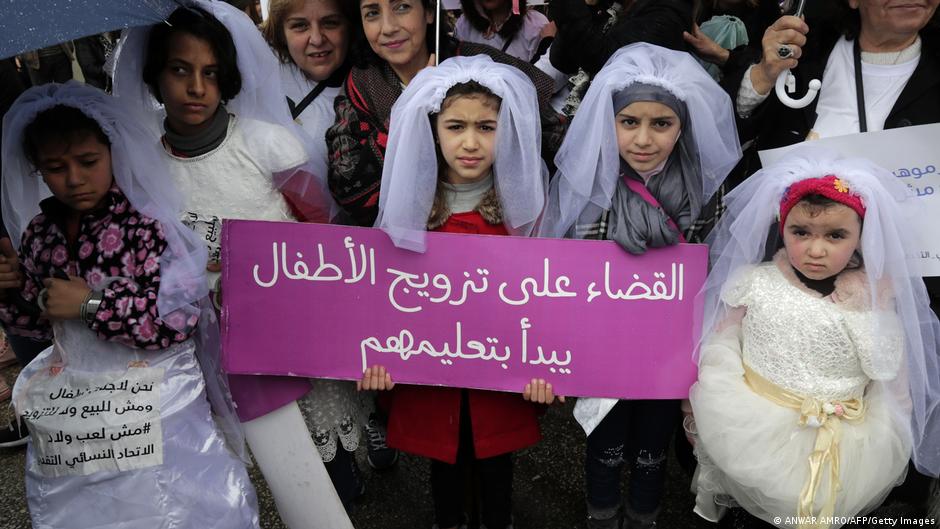 Child protection campaigners say closed schools and rising poverty, along with the lack of a legal minimum age, are pushing more girls under 18 into marriage.

“From what we have been able to observe in the field and from what our local partners are telling us, we believe that child marriage is increasing as a result of the difficult circumstances here today,” Johanna Eriksson, who heads UNICEF’s Child Protection Program in Lebanon, told DW. “It is just one of the negative coping mechanisms that people here are resorting to.”

Farah Salhab, of the Save the Children organization in Lebanon, said: “Since the pandemic, we have seen a direct link between COVID-19 and a rise in child marriage.”

In March, UNICEF put out a statement saying the pandemic could result in as many as 10 million more girls being put at risk of being married over the next decade worldwide. Although some young boys are forced into marriage, this problem mostly affects young girls.

Researchers who study the topic have concluded that the health and economic crisis in Lebanon are creating the kinds of conditions they already know will increase the number of underage betrothals.

Plan International, an organization that focuses on children’s rights, looked at what happened during past crises — for instance, the 2014 Ebola epidemic in West Africa — to compile a May 2020 report on children living under lockdown. School closures had a huge impact, the organization found. Depending on such factors as whether families ask for dowries, Plan International concluded that school closures could increase a child’s probability of being forced into marriage by 25%.

Because remote learning simply wasn’t possible for many children in Lebanon, a lot of girls dropped out of school altogether, Salhab said: “We have spoken to girls who told us they were forced to get married after leaving secondary school.”

Even if schools in Lebanon were to reopen tomorrow, there will still be a lot of girls who never return to class, Eriksson said.

Other factors that are known to increase child marriage include the curtailment of development or aid programs, the potential for an unplanned pregnancy, the possible death of a parent or caregiver, and economic pressure, Plan International researchers wrote. The latter is one of the most significant factors in Lebanon.

Although there’s no dowry tradition in Lebanon, and no money changes hands when a girl marries, she does becomes her husband’s economic responsibility, Eriksson said. “From an economic perspective, her family sees that as positive,” she noted. “They believe they are doing what is best for their child.”

Perhaps one of the most concerning issues in Lebanon currently is that underage marriage seems to be becoming more widespread.

In the past, certain parts of the population in Lebanon had more underage or forced marriage than others. Some of the latest numbers, collected by UNICEF between 2015 and 2016, before the current crisis, indicated that about 6% of Lebanese women were married before they turned 18. However percentages are much higher among the country’s refugee populations. About 12% of female Palestinian refugees from Lebanon, 25% of female Palestinian refugees from Syria and at least a quarter of the newest arrivals, female refugees from Syria’s civil war, were married before they turned 18.

Now, researchers believe that children are also increasingly being married off outside of Lebanon’s refugee populations.

“We are starting to hear and see that this is also affecting the Lebanese population,” Eriksson said. “But that’s not surprising considering that levels of poverty are rising.”

There is no firm data on this yet. Salhab said. Before the current health and economic crises, she added, the numbers for underage marriages in Lebanon had been going down. “But we can say that child marriage is more visible as an issue among communities where it was not necessarily a problem,” Salhab said.

Another reason why child marriage is possible in Lebanon is because, unlike many of its regional neighbors, including Iraq, Egypt and Jordan, the country does not have what is known as a “personal status law.” This kind of law regulates things such as inheritance, custody of children and the legal age of marriage.

Inside Lebanon, each one of the 18 recognized religious groups sets its own rules on the legal age to wed. These range from 14 years old for Catholics to 18 for members of the Greek Orthodox Church. This week, the country’s ranking Sunni Muslim religious authority raised its minimum age for marriage to 18. A few weeks earlier, Shiite Muslim religious authorities said nobody should marry before they turned 15.

Camale Cherfane, a member of the Lebanese Democratic Women’s Gathering, told DW that raising awareness of the dangers of underage marriage is also important. “Creating laws is not enough if individuals are not interested or trusting of them,” Cherfane said. “More awareness will be a catalyst for further development and a change in law.”

Lebanese civil society activists have been trying for years to get the government to pass a personal status law. One was introduced to the Parliament in 2017. It would have criminalized child marriage but was never passed.

The fact that the rate of child marriage is rising in Lebanon is obviously not welcome news for the many organizations fighting the issue. However, specialists have a good idea of what is needed to bring the numbers back down, Eriksson said.

Before the civil war in Syria, only about 10% of girls there were married younger than 18 — far lower than the 25% in recently arrived Syrian refugee families in Lebanon today. “So it’s not just a social or cultural issue,” Eriksson said. It was only after these families became refugees and were confronted with economic hardship that they started to have their children enter into marriage far younger, she added.

To resolve this, several things must happen in tandem, Eriksson said. Firstly, Lebanon needs a personal status law, or something like it. “Secondly, service and support for families and children is needed,” Eriksson said. This involves everything from access to educational opportunities and information on sexual and reproductive health for teens to emergency cash transfers to families in need. And then, finally, there needs to be widespread promotion of different attitudes toward gender roles — including the idea of early marriage.

“With all those things combined we know we would have a stronger protective environment and there would be less child marriage,” Eriksson concluded.