KYRGYZSTAN: Kidnapped, raped and wed against their will, a brutal tradition 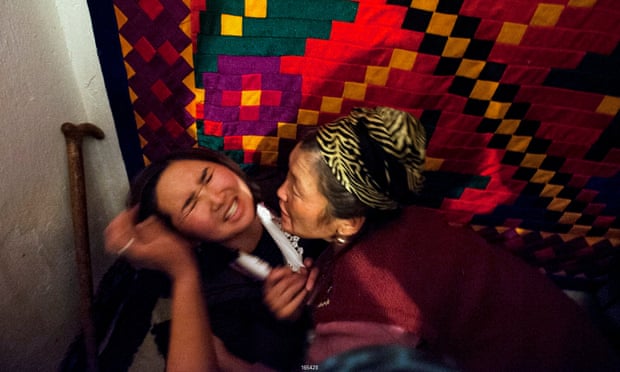 Kidnapped, raped, wed against their will: Kyrgyz women’s fight against a brutal tradition

At least 12,000 women are still abducted and forced into marriage every year in Kyrgyzstan. But pressure is growing to finally end the medieval custom

The Guardian (30.08.2021) – https://bit.ly/2X2E5j6 – A isuluu was returning home after spending the afternoon with her aunt in the village of At-Bashy, not far from the Torugart crossing into China. “It was 5 o’clock in the afternoon on Saturday. I had a paper bag full of samsa [a dough dumpling stuffed with lamb, parsley and onion]. My aunt always prepared them on weekends,” she said.

“A car with four men inside comes in the opposite direction to mine. And all of a sudden it … turns around and, within a few seconds, comes up beside me. One of the guys in the back gets out, yanks me and pushes me inside the car. I drop all the samsa on the pavement. I scream, I squirm, I cry, but there is nothing I can do.”

The man who kidnapped her would soon become her husband. At the wedding, Aisuluu discovered that she was not even the woman he had intended to kidnap for marriage. But in the haste of having to return home with a bride and after wandering the streets all afternoon, the man decided to settle for the first “cute girl” he saw.

This was 1996, and Aisuluu was a teenager. Today she has four children by her kidnapper-turned-husband, to whom she is still married.

Known as ala kachuu (“take and run”), the brutal practice of kidnapping brides has its roots in medieval times along the steppes of Central Asia, yet persists to this day. It has been banned in Kyrgyzstan for decades and the law was tightened in 2013, with sentences of up to 10 years in prison for those who kidnap a woman to force her into marriage (previously it was a fine of 2,000 soms, worth about $25).

The new law has not curtailed the practice, however, and prosecutions are rare. Nevertheless, according to the human rights organisation Restless Beings: “This is a significant development, in that prior to this the sentence for stealing livestock was considerably more than that for ala kachuu.”

“A happy marriage begins by crying,” goes one Kyrgyz proverb, and those tears are of anger and terror at the start of a marriage for ala kachuu brides.

Ala kachuu is practised in all the countries of Central Asia, but it is especially common in the rural areas of post-Soviet Kyrgyzstan, a predominantly Muslim nation of about 6 million people. During Soviet rule, the custom was rare and parents generally arranged marriages.

Data from the Women Support Center, an organisation that fights for gender equality in the country, indicates that at least 12,000 marriages take place, and are consummated, every year against the will of the bride. (The figure is from a 2011 report and believed to be an underestimate). Men kidnap women, they say, to prove their manhood, avoid courtship (considered a tedious waste of time) and save the payment of the kalym, or dowry, which can cost the groom up to $4,000 (£3,000) in cash and livestock.

After the ala kachuu, which in some cases can be a consensual “kidnapping” when a couple wishes to speed up the process of marriage, the brides are taken to the house of the future husband. The in-laws welcome the woman and force her to wear the jooluk, a white shawl that signifies submission to the bride’s new family. Then comes the wedding. About 80% of the girls kidnapped accept their fate, often on the advice of their parents.

According to data from the Unicef office in Bishkek, the percentage of girls aged 15 to 19 who become pregnant in Kyrgyzstan is among the highest in the region, while 13% of marriages take place before the age of 18, despite it being illegal.

It is estimated that 2,000 women are raped by their future husbands each year (again this number is believed to be well below today’s figures), and are thus condemned to marry, because returning to their family would be a deep mark of shame. Fleeing brides also risk further violence and even death.

One such bride, Aizada Kanatbekova, 27, was found strangled to death in a field in early April this year, two days after being forcibly bundled into a car with the help of two passers-by. The kidnapping took place in daylight in the centre of the capital, Bishkek – an alarming indication that this practice is not limited to the countryside.

Altyn Kapalova, a writer, feminist activist and researcher at the University of Central Asia in Bishkek, condemned the lack of legal protection for women. “A police station is not a safe place for a woman seeking help. If a woman goes to a police station to report a kidnapping, they laugh at her, tell her it’s not their business, to go home and settle it with her family,” she said.

In 2018, one shockingly gruesome case highlighted the authorities’ callous attitude. The victim, Burulai Turdaaly Kyzy, a 20-year-old medical student, was murdered in a police station by the man who had kidnapped her. He stabbed her, then carved her initials and those of another man she had planned to marry on to the woman’s body. The officers had left the two of them alone in the waiting room.

The perpetrator was convicted of murder and sentenced to 20 years in prison. But activists say that the majority of violence against women still goes unpunished. “The problem is one of culture, of education, and not of laws,” said Kapalova, who has received constant threats since 2019, when she jointly organised Kyrgyzstan’s first feminist art exhibition. The highly controversial show, Feminnale, brought whip-wielding nationalists out in protest when it ran for 17 days at the Kyrgyz National Museum of Fine Arts in Bishkek.

Another artist hoping to change attitudes is Tatyana Zelenskaya, who works with the human rights organisation Open Line Foundation, which supports victims of bride kidnapping through counselling and legal advice. Zelenskaya created the drawings and graphics of Spring in Bishkek, a video game for smartphones that aims to convince young people that kidnapping is not a tradition but a crime.

In just over six months, the app has already been downloaded more than 130,000 times; an extraordinary success, given that developers had hoped for 25,000. In the game, players witness the kidnapping of a best friend and must free her, while messages with suggestions prepared by psychologists, journalists and activists appear on the screen, as well as real telephone numbers that can be used in an emergency.

“The idea is to make the girls understand that they are masters of their own destiny. This is why we transform them into heroines capable of rebelling and changing the course of things,” said Zelenskaya. “For a generation of women who grew up with the idea that nothing is possible without a man’s approval, unhinging this concept is difficult.”

The Kyrgyz government has given little indication that it supports these efforts. Indeed, the wording of the new constitution is read by many as a shift in priorities towards an erosion of human rights and fundamental freedoms if they are in conflict with “traditional” values.

The prologue of the constitution, introduced by the nationalist president, Sadyr Japarov, and approved in a referendum in April 2011, underlines the importance of the spiritual and cultural values of Kyrgyz society – “following the traditions of our ancestors, continuing to live in unity, peace, harmony with nature, based on the precepts of Manas the Magnanimous”, referring to the hero of a Kyrgyz epic. The passage is seen by many as a tacit endorsement of ala kachuu.

Resistance to those old values is embodied by the dynamic group of eight Kyrgyz women aged 18 to 24 behind the Kyrgyz Space Programme, an initiative funded by private donations. They plan, next year, to launch into orbit Kyrgyzstan’s first satellite, a tiny “nanosatellite” with only basic functions but nevertheless capable of receiving and sending a signal.

“We have been working on a CubeSat for some time, building it entirely, piece by piece: technology, programming, mathematics, physics, up to welding,” said Kyzzhibek Batyrkanova, the eldest in the group.

All eight women are studying aerospace engineering while constructing the CubeSat. They also travel to remote areas to give seminars to schoolchildren, especially girls, on the basics of engineering, mathematics, science and technology. They also share personal stories of female “emancipation”.

Anna Boyko, who oversees the physics and programming courses for the group, says: “I was like them, a young girl whose highest aspiration was to find a ‘charming prince’ . Then I took part in two weeks of training in a computer company … and after two days they all realised that I was much better than my male companions with computers.”