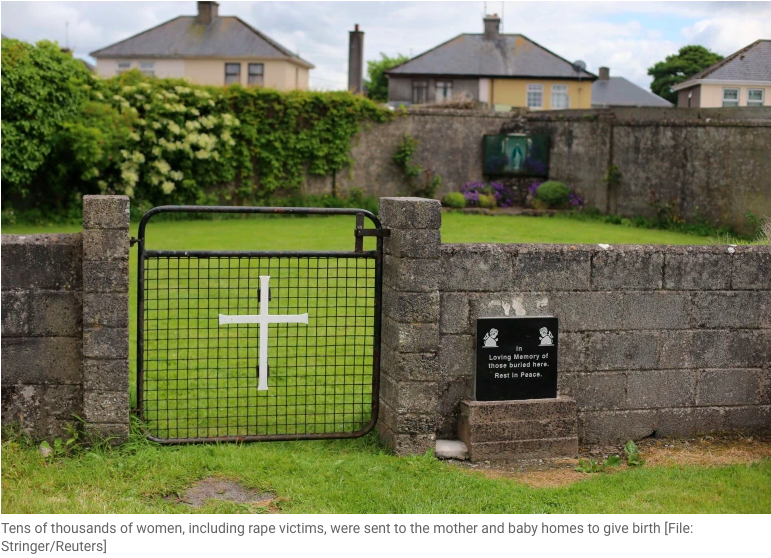 Relatives have alleged the babies at mother and baby homes were mistreated because they were born to unmarried women.

Al Jazeera (12.01.2021) – https://bit.ly/3i783Zv – One of the Catholic Church’s darkest chapters will be revisited on Tuesday when an Irish inquiry into death rates among newborns at church-run homes for unwed mothers hands down its final report.

Relatives have alleged the babies at the mother and baby homes were mistreated because they were born to unmarried women who, like their children, were seen as a stain on Ireland’s image as a devout Catholic nation.

The 3,000-page report is due to be published by mid-afternoon following the five-year investigation by the Mother and Baby Homes Commission of Investigation.

It is expected to reveal that 9,000 children – one in seven – died in the 18 institutions investigated between 1922 and 1998, when the last one closed, according to a leaked version of the report obtained by the Sunday Independent, an Irish newspaper.

The institutions, which doubled as orphanages and adoption agencies, were established across Ireland throughout the 19th and 20th centuries.

While run by nuns, they received state funding and were also regulated by the state.

Deputy Prime Minister Leo Varadkar on Monday said the report into their history made for difficult reading.

Irish Prime Minister Micheal Martin is expected to issue a formal state apology to the victims in the country’s parliament on Wednesday.

Tens of thousands of women, including rape victims, were sent to the homes to give birth.

Government records show that the mortality rate for children at the homes was often more than five times that of those born to married parents.

The commission into the institutions was formed in 2014 after evidence of an unmarked mass graveyard at an institution in Tuam, in the western county of Galway, was uncovered by amateur local historian Catherine Corless.

Corless found death certificates confirming that nearly 800 children had died at the site, but there were no burial records.

She said she had been haunted by childhood memories of skinny children from the home.

Excavations in 2017 revealed “significant quantities of human remains” in 20 underground chambers in a decommissioned sewage tank on the site’s grounds, the commission said in an interim report.

Then-Prime Minister Enda Kenny described the burial site at Tuam as a “chamber of horrors”.

The grim revelations have further tarnished the Catholic Church’s reputation in Ireland, which has been shattered in recent years by a series of tragedies that includes abuse at workhouses, forced adoptions of babies born out of wedlock and priests who have sexually assaulted children.

During the first papal visit to the country in almost four decades in 2018, Pope Francis begged for forgiveness for the scandals.