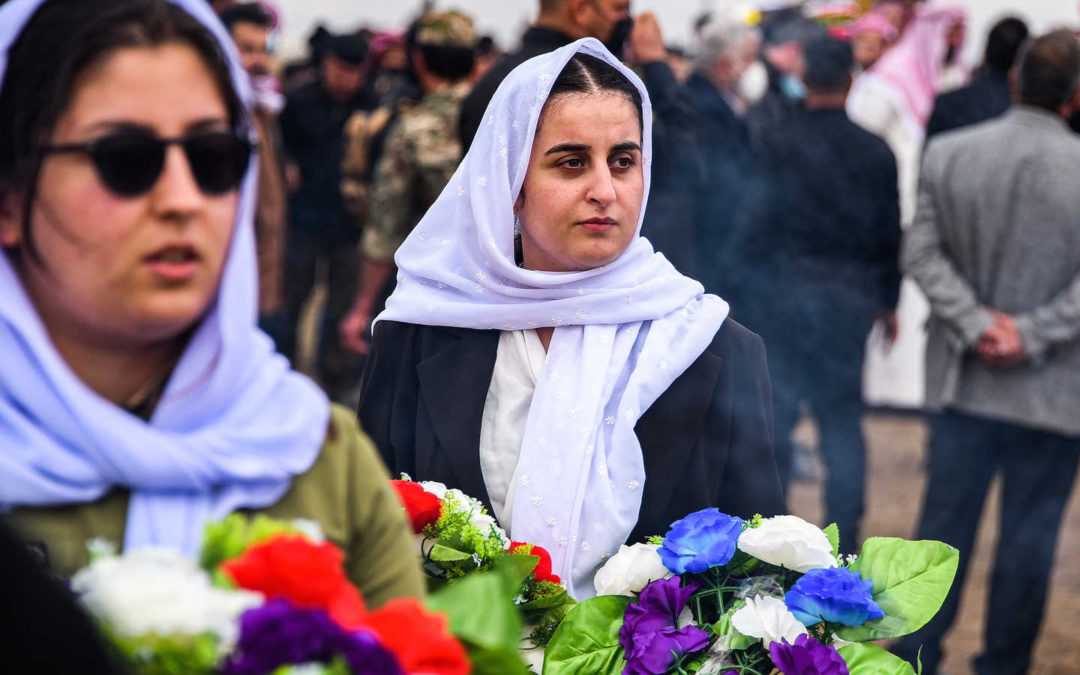 The landmark bill formally recognizes the Yazidi genocide and the trauma of sexual violence, but the community still faces grave security concerns and missing men, women and children.

AL-Monitor (02.03.2021) – https://bit.ly/3kW8xTF – After nearly two years in Iraq’s parliament, the Yazidi Women Survivors Law passed on Monday in a landmark for formal recognition of the Yazidi genocide.

The bill calls for compensation, rehabitation and education for survivors. It also creates a new directorate for survivor’s affairs and a civil court in the Nineveh governorate and outlines punishment for people involved in abduction and sexual crimes. The move was applauded by Yazidis as progress in addressing the destruction caused by the Islamic State nearly seven years ago.

First submitted by Iraqi President Barham Salih to the parliament in April 2019, the draft bill was reviewed twice but each time met pushback. Some argued that the text was too narrow in scope and needed to include men and boys that were also kidnapped. Other groups fought for the inclusion of Christians, Shabaks and Turkmens who were also subjected to sexual violence.

A special parliamentary committee was formed to amend the terminology. Last month, however, the legislature failed to achieve the quorum needed for a vote. Days later, Salih called on the parliament to expand and expedite the bill.

Salih tweeted on Monday that the vote was a victory for “our daughters who have been subjected to the most heinous violations and crimes of ISIS genocide.”

The United Nations Assistance Mission for Iraq also hailed the move as a “major step in addressing the needs of survivors of atrocities that include reparations and proof of Iraq’s commitment to address the crimes they endured.”

Some Yazidi community members have cautioned against overstating the bill’s importance. The law’s passage of the law is an acknowledgement that what happened to Yazidi women and girls was real and deserves recognition and compensation, but pressing needs continue to face the community.

“We want to make sure that this bill does not constitute the end or the solution of state responsibilities to the people,” said Pari Ibrahim, executive director of the Free Yezidi Foundation. “We are pleased by this bill’s passing, but it does not solve everything.”

Last month, the remains of 104 Yazidi victims of IS were transported to Baghdad and given a state funeral ceremony before returning to the Sinjar village of Kocho for burial. They were killed in an IS attack on Sinjar in August 2014 that targeted the Yazidi community and other minority groups living in the Sinjar region of northern Iraq.

In total, at least 10,000 Yazidis were killed or abducted by the Islamic state. A majority of the once 550,000-strong community was displaced and only about 30% of the Sinjar district’s population, which also includes Assyrians, Turkmens and other groups, have since returned. More than 2,700 Yazidis are still missing.

“Efforts must continue to find out the fate of the remaining missing and kidnapped persons, provide redress for the victims and hold the criminals accountable,” Salih tweeted.

Implementing the law also presents a new challenge amid mounting security and political instability. Public services in Sinjar remain scarce. Infrastructure in the district is still largely destroyed and security is nearly nonexistent, a Yazidi in Sinjar told Al-Monitor.

About 200,000 Yazidis are forced to continue living in displacement camps, but time is running out as Baghdad has called for their closure and for the residents to return home, despite many not having a home to return to.

Armed extremists still haunt the expansive mountain range of Sinjar, where just last week Turkey and Iran called each other’s ambassadors to discuss Turkish attacks on Kurdistan Workers Party fighters that have settled in the area after helping drive out IS.

“Without implementing it correctly, the survivors will not get any benefits from it,” Saad Babir, spokesperson for Yazda, an international organization that supports Yazidis, told Al-Monitor. “The bill will not end the suffering that Yazidis are still facing and dealing with on a daily basis.”