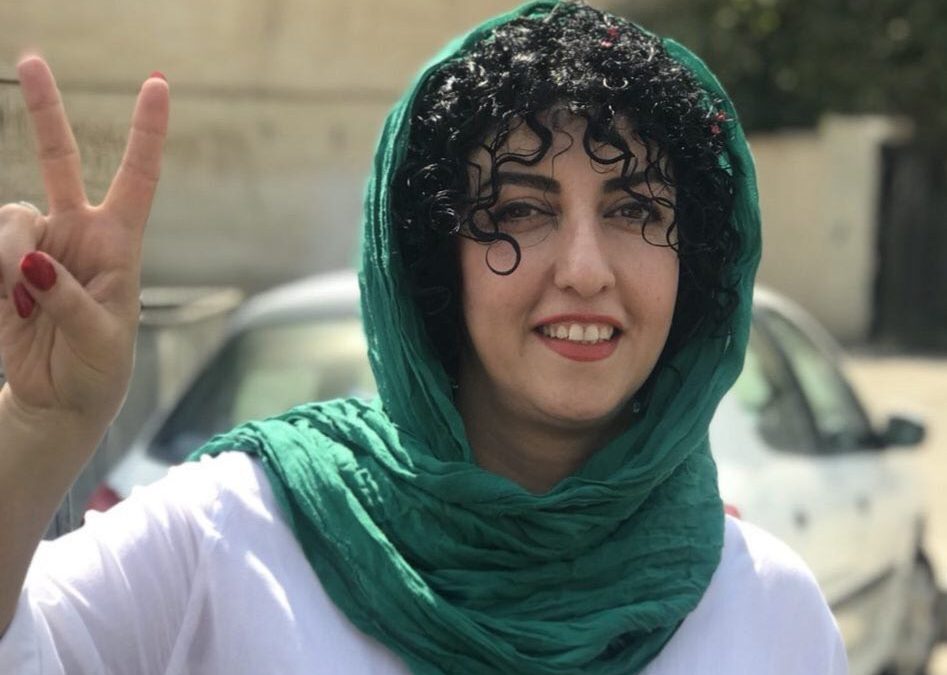 Center For Human Rights in Iran (17.11.2021) – https://bit.ly/3kQgPxM –  The prominent rights advocate Narges Mohammadi was detained on the anniversary of the country’s violently repressed November 2019 protests and could be flogged and serve a 30-month prison term if the international community remains silent, the Center for Human Rights in Iran (CHRI) said today.

“By arresting Narges on the anniversary of these historic protests, Iran’s brutal security establishment is sending a clear message to the world: Peaceful dissent will be punished as a crime under President Ebrahim Raisi,” said CHRI Executive Director Hadi Ghaemi.

“The Iranian government welcomes silence on the part of other nations, and it is now—not later—that the international community should present a united front against this crushing of freedom of speech and thought in Iran,” added Ghaemi.

Arrested, Placed in Solitary, for Honoring Bystander Killed by Security Forces During Protests

Mohammadi was arrested on November 16, 2021, in the city of Karaj at a ceremony honoring Ebrahim Ketabdar, a father of two who was shot and killed during the security forces’ indiscriminate firing at civilian protesters two years ago that day.

“Narges Mohammadi is in Evin Prison,” tweeted her husband Taghi Rahmani on November 16. “In a phone call she said they informed her that she is to serve 30 months in prison [a sentence issued earlier that had not been enforced] and they want to flog her.”

“I emphasize that she was informed of her 30-month sentence enforcement while in solitary confinement,” said Taghi who lives in France with their children. “Also, the flogging sentence is 80 lashes. By cutting off the phone, we have been denied the ability to get information on her condition.”

Mohammadi had previously announced the sentence in a September 26, 2021, Instagram post. It was issued against her almost one year after she’d been released from prison and was intended to punish her for filing a complaint against Evin Prison Director Gholamresa Ziaei.

In a February 2021 video message, translated into English by CHRI, Mohammadi detailed how Ziaei personally beat her for participating in a peaceful sit-in inside Evin Prison in December 2019.

Earlier that month, Mohammadi had confirmed that leaked cell phone footage from Evin Prison showing blood on the ground was the blood she lost the day she was violently assaulted by Ziaei and other security agents.

Mohammadi has been repeatedly harassed and assaulted by security agents since her release from prison in October 2020 after completing a five-year prison sentence for her peaceful rights advocacy.

Yet she has refused to allow the government’s intimidation tactics to stop her peaceful activism.

She has appeared in person in solidarity with grieving family members of protesters who were killed by security agents during the November 2019 protests, as well as spoken out against the unjust execution of champion wrestler Navid Afkari—whose two brothers are currently serving lengthy sentences after trials lacking any semblance of due process.

She has also spearheaded a major lawsuit by civil rights activists against Iranian authorities’ unlawful and routine use of prolonged solitary confinement—a form of white torture that she is currently experiencing and underwent as a political prisoner.

Mohammadi is among the many activists, human rights lawyers, and artists who have been threatened with imprisonment or have been imprisoned since President Ebrahim Raisi, a known gross violator of human rights, and fellow rights violator Judiciary Chief Gholam-Hossein Mohseni Ejei came to power in August 2021.

In May 2021, the European Union called on Iran to review Mohammadi’s sentence, yet countries that are working to restart nuclear talks with Iran have since remained largely silent as the country’s new government solidifies its power by choking civil society.

“On the day Mohammadi was arrested, she was peacefully observing the anniversary of the killing of a father of two who happened to step into the street while security forces were firing indiscriminately at protesters,” said Ghaemi.

“Paying lip service to human rights without signaling that the international community will exact meaningful diplomatic and economic costs for these egregious rights violations gives the Iranian government a green light to stifle, torture, and kill those who peacefully resist with impunity,” said Ghaemi.