IRAN/FRANCE: Iranian converts have to prove their faith to obtain asylum 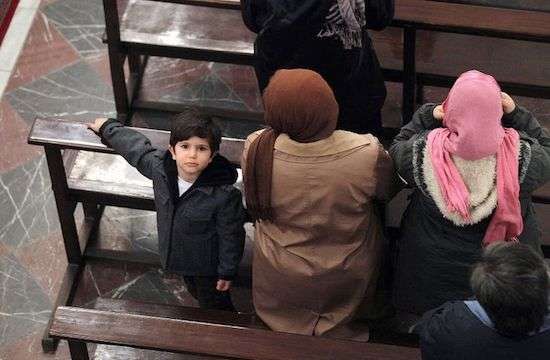 La Croix International (17.02.2021) – https://bit.ly/2N7kObE – When Ali (not his real name) went to the French Office for the Protection of Refugees and Stateless Persons (OFPRA) for his interview, he knew that he would be questioned about his personal history, particularly about his conversion to Christianity in Iran.

He was asked to name a scripture passage that was important to him. He chose the Passion of Jesus Christ.

“How did this passage resonate with you?” the protection officer asked.

“What attracted me most is that a human being, even at the moment of being tortured, asks people for forgiveness, even though he is here because of their faults. (…) That’s what made me begin to love Jesus and this gesture,” Ali said.

The interviewer was not convinced. He informed Ali a few days later that his request for asylum had been rejected.

“When asked to describe the personal journey that led him to convert to Catholicism, the person described a family environment marked by a rigorous practice of Islam and his words remained impersonal, invoking only the notion of forgiveness,” wrote the OFPRA agent.

“The agency cannot consider him to be at risk of persecution upon return to Iran, as the sincerity of his approach was not considered to be established,” the official said.

Assessing the sincerity of a convert’s faith

Every year, just over 100,000 foreigners seek France’s protection because of the threats they face in their home countries.

A handful are Iranians — around 350 in 2020, a little more in previous years — and among them, many say they have converted to Christianity.

Though he does not keep statistics about the “motive”, the director of OFPRA, Julien Boucher, observes that “for two decades” the issue of conversion has often appeared in the files of Iranians, most of the time within a Protestant Church.

Boucher says that, because religious persecutions “touch on the intimate”, this is the reason why “the examination is very specific”.

“We are fully aware of this. It is not a question of judging the sincerity of the applicant’s faith, but of assessing the validity of the alleged fears,” he points out.

Threats are very real for those the Iranian regime considers to be “apostates”. But how can the true danger of such threats be verified without actually trying to assess the sincerity of the asylum seeker’s conversion?

Father Jean-Marie Humeau assists the Iranian Catholic community. On his desk are seven files of Iranian converts whose requests have been rejected by OFPRA.

“In all seven cases, OFPRA asked spiritual questions to see whether or not the conversion is genuine and to challenge the risk of persecution. This raises questions,” the priest argues.

Arshad, 36, is currently in France awaiting the decision of OFPRA. He’s familiar with the obstacle course for Iranian converts.

He was arrested in Tehran while he was reading the Gospel with friends and subjected to several weeks of interrogation and psychological torture in prison before finally being released on bail.

After he returned home, he started receiving anonymous threats over the telephone. Pressure was put on those close to him, he lost his job and, finally, he did what many people do — he fled to another country.

“The difficulty of the French interrogations is famous,” he says.

OFPRA asked one of his friends “the name of the twelve apostles”, another to say “what the Trinity means to him”.

“I understand that they are trying to verify whether the danger is real, but that they decide that our faith is not ‘complete’ seems really strange to me,” Arshad says.

For the National Association of Border Assistance for Foreigners (Anafé), these “intrusive” questions are even more incomprehensible when applicants are in waiting areas, such as ports, train stations or airports.

They are summoned to explain themselves in a few hours, face-to-face or over the phone, sometimes not even knowing whom, exactly, they are speaking with.

“The protection officer asked the man many questions about the Christian religion, its rituals, its saints and its beliefs, and expected him to give precise answers,” said an Anafé employee who witnessed an Iranian couple being interviewed in 2017 at Paris Charles de Gaulle Airport.

The man had to indicate how often he went to Mass, although going to religious services is illegal for Iranians who do not belong to recognized churches.

He was even asked “the date of Christmas, without taking into account the fact that Iranians do not have the same calendar”.

Ordinariate for Catholics of the Eastern Churches offer to help

“While it is only supposed to verify the credibility of the request, OFPRA often launches into a substantive examination, under conditions that do not allow it,” says Anafé’s director, Laure Palun.

“And it is not even certain that those who have been Christians for a long time know how to answer these questions,” she notes.

“Under no circumstances do we ask protection officers to give a kind of knowledge test,” he insists.

He claims his organization takes its lead from the good practices of the United Nations High Commissioner for Refugees (UNHCR).

Agents limit themselves to asking questions concerning the person’s “path of conversion”, the “circumstances” of the conversion, the new religious practice and, finally, the persecutions suffered or feared.

“Something the claimant says may, in turn, prompt further questions from the instructor,” Boucher explains.

The role of the interpreters — in the vast majority of Iranian and Shia Muslim cases — is also regularly questioned.

Do they know the Christian terms used? Do they risk distorting certain words because of their own bias against or disapproval of conversion?

OFPRA’s director points out that interpreters are bound by a “strict code of ethics” and have received “awareness-raising and (other) training”. In addition, “the recording of all interviews” are “available in case of a dispute”.

The Ordinariate for Catholics of the Eastern Churches in France is trying to help improve the handling of these complex cases and has offered assistance, again based on UNHCR recommendations.

“Refugee status determinations based on religion could also benefit from the assistance of independent experts with particularized knowledge of the country, region and context of the particular claim and/or the use of corroborating testimony from other adherents of the same faith,” UNHCR guidelines state.

But OFPRA’s management, so far, has declined the Ordinariate’s offer to help.

“Our information, documentation and research division already mobilizes many external resources to refine our knowledge of countries of origin,” says Boucher, OFPRA’s director.

“As for testimonials, we take them into consideration, but assess their probative value,” he adds.

Photo : The family during Mass in a Catholic church in Tehran. (Photo by ATTA KENARE/AFP)