INDIA: The death of secularism in India: « Homecoming » in the name of the Hindu rashtra 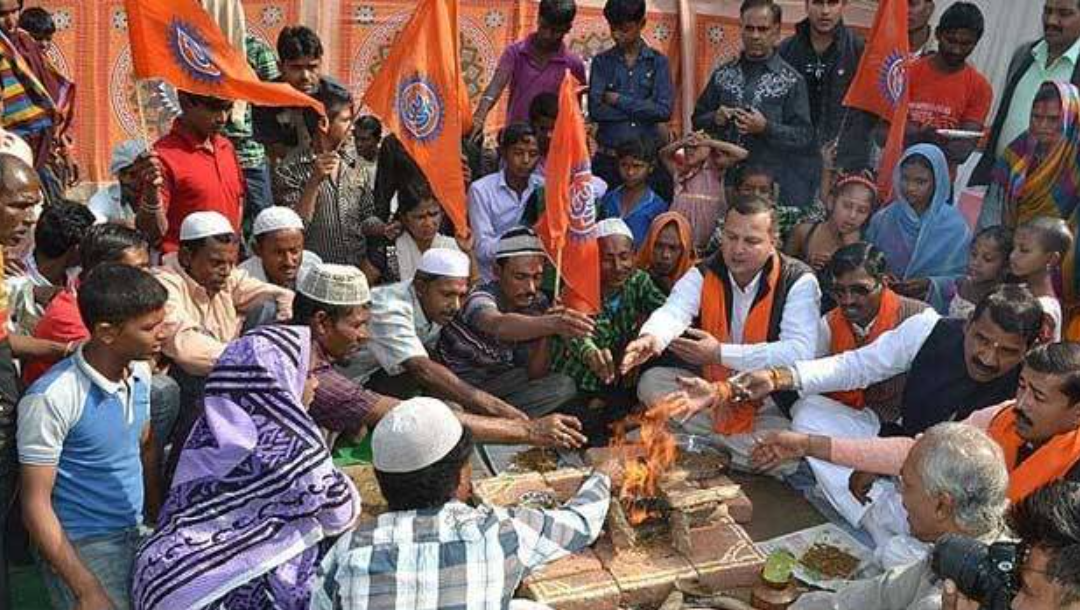 FORB in full (26.04.2021) – https://bit.ly/3vvRPPf – In 2014, months after the Bharatiya Janata Party (BJP) came into power, Praveen Togadia, the former President of the Visha Hindu Parishad (World Hindu Council [VHP]), said that his organisation will work towards making India a 100% Hindu nation.

This vision of a Hindu rashtra (nation) has continued to intensify over the past six years, with rhetoric promoting old narratives that all Indians are Hindus despite their religion or belief, as well as suggestions that Muslims in the country are perpetrating a “love jihad” campaign to strengthen Islamic influence, and that Western governments are providing support for the proselytisation of Christianity.

Misinformation and disinformation have been rife in India for decades. In 1999, false assertions about foreign missionaries preceded the horrific killing of the Australian Graham Staines and his two sons in Orissa (now Odisha). This marked a rise in suspicion towards and violence against Christians, which has continued to date.

Several states have recently introduced laws that regulate conversion, including Jharkhand (2017), Uttarakhand (2018) and Uttar Pradesh (2020), as well as others such as Madhya Pradesh (2021) and Gujarat (2021) that have passed stricter amendments to their existing laws. The result of this: the boundaries of faith have increasingly become the interest of the state. It is also a trend concerningly likely to be pursued by other states should the Bharatiya Janata Party (BJP) pick up more electoral votes in state elections this year.

Separately from such legislation, communal issues like ghar wapsi or ‘homecoming’ ceremonies have become the primary tool used by Hindu nationalist groups like the VHP and its militant youth arm, the Bajrang Dal, to chastise Christians and Muslims in the effort to reclaim the Hindu nation. These typically involve ceremonies of humiliation in which non-Hindus are converted to the Hindu religion.

The RSS’s ideology of Hindutva, which regards Hindus as superior to other religions or belief, says that they do not convert people but help them return to their original faith. According to Champat Rai, the Vice President of VHP, the primary mission of establishing the organisation is to carry out “homecoming” campaigns, which local monitoring sources say is a problem that primarily besieges the Scheduled Caste and Adivasi (tribal) communities, who are largely poor with little or no education.

Uttar Pradesh, where there is a high density of Schedule Caste, has recorded the highest number of ghar wapsi ceremonies, with the tribal belt states of Jharkhand, Bihar and Chhattisgarh also generally known as hotbeds for such incidents.

While the factors influencing ghar wapsi are complex and hard to quantify, some trends reveal the methods used by Hindu nationalist groups. Incorporating social media propaganda and fear tactics, their campaigns undermine fundamental freedoms and rights.

A common method featured in the ghar wapsi rhetoric is the making of hyperbolic claims about the numbers of reconversions. In Garhwa District, Jharkhand, the Naybharat Times reported on 15 March 2021 that 181 people from 35 tribal families had been reconverted to ‘Sarna’ (nature worship), which local monitoring sources have disproved as an exaggeration of numbers.

The recycling of content on social media to portray as if it were a recent event is also used to gain the confidence of supporters that the Hindu rashtra project is progressing. According to local sources, in a video published on 5 April 2021, 27 Christians from Khala village, Dhurki District, Jharkhand, were presented to have undergone ghar wapsi. The video was shared repeatedly on social media to mislead the public, when in actual fact only six people were reconverted.

At other times, false narratives are created as justifications for ghar wapsi whereby tribal communities are forced to discredit Christianity. On 16 March 2021, an estimated 50 tribal men and women in Chartra, Jharkhand, were made to say that they were allured into Christianity and had decided to reconvert. Local monitoring sources say that such outcomes are a result of constant harassment resulting in fear of retribution by Hindu nationalist groups.

The death of secularism in India

For the Rashtriya Swayemsewak Sangh (RSS), “conversion” is considered an intrusion of the motherland and an existential threat to the pre-eminence of Hinduism. Mohan Bhagwat, the RSS chief, once warned minorities not to convert Hindus, referring to them as intruders.

As the debate over conversions continues with fervour from the BJP camp to gain political points in the state electoral process, the preservation of India’s secular fabric is being dismantled, adversely affecting the freedom of choice of thought, conscience and religion.

With a playing field that is far short of what was envisaged by the architects of the Indian constitution, the battle for the people’s soul is based on rules that are dictated by Hindu nationalism and those who wield the news media that will browbeat religious minorities into submission.