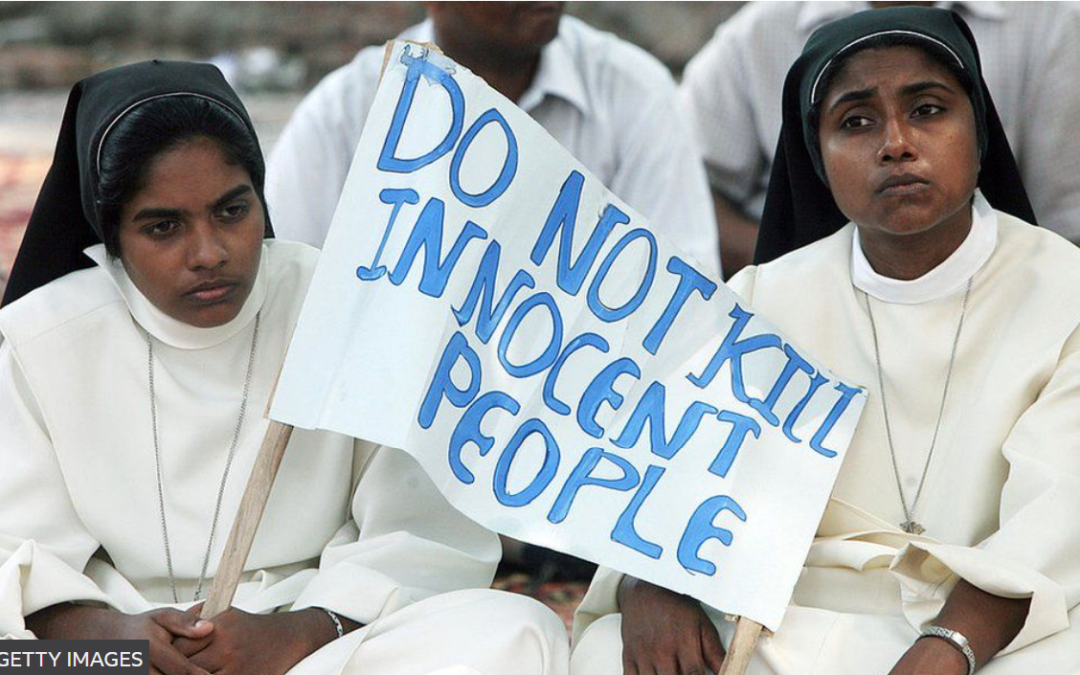 BBC (20.12.2021) – https://bbc.in/3petmxy – One Sunday in October, Pastor Somu Avaradhi got a shock when he entered his church in Hubballi city in the southern Indian state of Karnataka.

“There were people sitting inside, singing Hindu religious songs and shouting slogans,” he told the BBC.

He says he called the police, but when they arrived, the protesters accused him of abusing and forcing a Hindu man to convert to Christianity. The pastor was arrested – under charges of “outraging the religious feelings of any class” – and spent 12 days in prison before he was released on bail.

This isn’t an isolated incident – a report by the Evangelical Fellowship of India (EFI) listed 39 cases of threats or violence against Christians from January to November this year in Karnataka.

These include alleged attacks on pastors by members of right-wing Hindu groups, and even instances where they reportedly physically prevented them from holding religious services. Christians are a tiny minority in overwhelmingly Hindu India.

The frequency, Christian representatives say, has increased since October, when the Bharatiya Janata Party (BJP), which is in power in Karnataka as well as nationally, said it was working on a “strong” law against religious conversion in the state.

Critics have described the current draft of the bill as “draconian” – it includes jail terms of up to 10 years for those who are found guilty of converting others by “force”, “fraudulent” methods or marriage, and possibly a denial of government benefits to those who convert from one religion to another.

Every such decision will be scrutinised since those who choose to convert will be required to notify local officials two months before – and officials will investigate the reasons before allowing it to happen.

Christian leaders are worried that the new bill will embolden Hindu radicals to further target the community. The fear is exacerbated, commentators say, by an increasingly polarising environment under Prime Minister Narendra Modi’s BJP in which minority communities feel targeted and threatened.

“Once the bill is passed, we will have to wait for more persecution and more difficulties,” Peter Machado, Archbishop of Bangalore, told BBC Hindi.

The bill is modelled on a law introduced last year in the northern state of Uttar Pradesh, also governed by the BJP. There, the law sought to target so-called “love jihad”, a popular Hindu right wing conspiracy that Muslim men lure Hindu women into converting by proposing marriage. State police have since registered more than 100 cases of alleged forcible conversion, the Print news website reported in November.

The Reverend Vijayesh Lal, general secretary of EFI, which runs 65,000 churches in India, alleged that the pattern in Karnataka was similar to what happened in Uttar Pradesh before the law was introduced.

“You push the community, you take them down, you level false allegations of conversion and then bring in a law which is unconstitutional,” he said.

Religious conversion is a controversial topic in India. Right-wing groups have long accused Christian missionaries of forcibly converting poor Hindus by offering them money or other support as bribes – a claim they deny.

But Dalits (formerly untouchables) have historically been known to convert to Christianity to escape a rigid Hindu caste hierarchy. Despite laws to protect them, the community is routinely the victim of not just discrimination but also violence.

These tensions have often translated into violence on the ground – in 1999, a spate of attacks on Christian institutions in the eastern state of Orissa (also known as Odisha) was followed by the horrific murders of an Australian missionary and his two young sons as they slept in a jeep.

Christian pastors and priests in Karnataka say they are fearful for the future. Initially, the attacks were limited to a few pockets in the state, but now 21 out of 31 districts have reported at least one violent incident.

“I have been here for 40 years but I don’t really know why these conversion allegations are coming now. We have a lot of friends among the Hindu community here,” said the Reverend Thomas T, president of the pastors’ association in Belagavi district.

Mr Thomas says that in November, local police informally told the association not to hold prayer meetings to avoid attacks by right-wing groups.

A police official, who spoke on condition of anonymity, told BBC Hindi that while individual police stations have advised priests to be careful, there was no “state-wide policy” on the issue.

Father Francis D’Souza, a priest at a local church in Belagavi, alleged last week that a man with a sword tried to attack him. The case is being investigated and top police officials have assured Father D’Souza that he will be protected.

“But that fear is still there in me,” he says.

Representatives from the community have questioned the need for an anti-conversion law, pointing out that India’s constitution gives the right to everyone to “propagate religion”.

BJP lawmaker Arvind Bellad, who led a massive protest against Pastor Somu, asked why only Christians are worried about the new bill.

“The interesting aspect is that other minority communities like Muslims or Sikhs or Jains are not worried about this new law,” he added.

State chief minister Basvaraj Bommai has said that only those who try to lure people into converting to a different religion need to fear the law.

But Archbishop Machado says that the attacks and the discourse around the bill are clearly aimed at Christians.

“It is not a good thing that the government is doing to us,” he said.

Social commentator and retired Maj Gen SG Vombatkere said that people should not take the law into their hands.

“If I have a complaint against you, I cannot come and beat you up,” he said. “I have no business to attack you, whatever you may have done. But the unusual is becoming the usual these days.”

Photo : Christians are a religious minority in India – Getty Images

Further reading about FORB in India on HRWF website