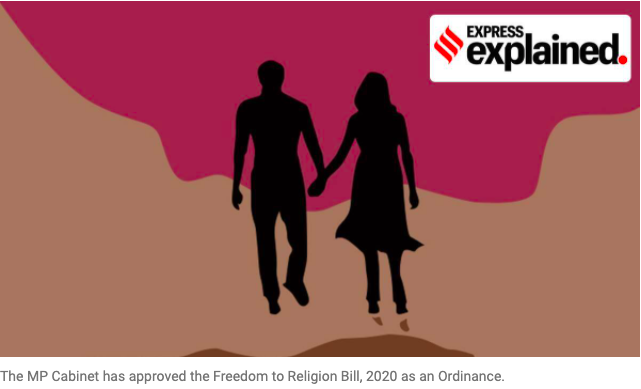 While a common feature of all three laws is the declaration of such marriages as “null and void” and the penalising of conversions done without the prior approval of the state, they differ in the quantum of punishment prescribed and other things.

The Indian Express (03.01.2021) – https://bit.ly/3nGX4Y2 – The Madhya Pradesh government is set to follow two other BJP-ruled states — Uttar Pradesh and Himachal Pradesh — in passing an anti-conversion law that outlaws religious conversion solely for the purpose of marriage. The MP Cabinet has approved the Freedom to Religion Bill, 2020 as an Ordinance.

While a common feature of all three laws is the declaration of such marriages as “null and void” and the penalising of conversions done without the prior approval of the state, they differ in the quantum of punishment prescribed, and in attributing the burden of proof that a conversion is lawful. Also, the MP law seeks to protect the rights of women of such marriages.

The MP law requires a 60-day prior “declaration of the intention to convert” to the District Magistrate for conversion to be valid, following which a couple from different religions can be legally married.

The Uttar Pradesh Prohibition of Unlawful Conversion of Religious Ordinance, 2020 promulgated in November, too requires a 60-day notice but also requires the Magistrate to conduct a police inquiry to ascertain the real intention behind the conversion.

The Himachal Pradesh Freedom of Religion Act, 2019 that came into effect last week, requires a 30-day prior “declaration of intention to convert”.

Section 4 of the MP law states that there cannot be an investigation by a police officer except on the written complaint of the person converted or the person’s parents/siblings. Guardians of the person converted can file a complaint only with the permission of a court. The MP law also says that no police officer below the rank of a sub-inspector can investigate an offence under the law.

The Himachal law says that prosecution cannot be initiated without the prior sanction of an officer not below the rank of a sub-divisional magistrate.

The UP law allows the same people as allowed by the MP law to file a complaint.

The MP law places on the person converted the burden of proving that the conversion was done without any coercion or illegality. The Himachal law has a similar provision. The UP law goes further, placing this burden of proof on people who “caused” or “facilitated” the conversion and not on the individual. Even in the police inquiry, if the Magistrate is not satisfied, criminal action under Section 11 of the Ordinance can be initiated against persons who “caused” the conversion. This includes those who committed the offence; omitted to act and prevent the offence; and aided, abetted, counselled or procured people for committing the offence.

While declaring as “null and void” any marriage in which either the husband or the wife has converted, even consensual, unless they have given prior notice to the state government, MP’s new law at the same time seeks to protect the right of women and her child from the “null and void” marriage. Under Section 9, the woman whose marriage has been declared null and void under this legislation, and her children, will have a right to maintenance. The law does not, however, provide a recourse for ensuring the marriage can be protected subsequently.

Neither the UP nor the Himachal law has such provisions.

The offence of illegal conversion under the laws of all three states is cognisable and non-bailable, which means an arrest can be made without a warrant and bail is granted only by the discretion of the judge.

Under the MP law, a person can be sentenced to a jail term between one and five years for converting or attempting to convert unlawfully. If the person converted is a woman, a minor or a person belonging to a Scheduled Caste or Scheduled Tribe (SC/ST), the sentence is two to 10 years. It also provides for a jail term of three to 10 years for concealing one’s religion during the marriage.

The UP law provides for a minimum punishment of one year, which can be extended up to five years, and repeat offences can carry double the maximum sentence. Men are awarded a higher punishment if convicted of causing conversion of a woman, a minor or a person belonging to an SC/ST — in which case the sentence is between two and 10 years.

In the Himachal law, a person can be sentenced to a jail term of one to five years for converting or attempting to convert unlawfully. If the person converted is a woman, a minor or a person belonging to an SC/ST, the sentence is two to seven years.

At least 10 states including MP and Himachal Pradesh already have anti-conversion laws. The key difference in the new laws is that they seek to criminalise conversions solely for the purpose of marriage.

The MP Ordinance repeals the Madhya Pradesh Freedom of Religion Act, 1968. While that too criminalised forced conversion, the new law adds provisions relating to conversion during marriage, maintenance rights, and reversal of the burden of proof by placing it on the accused.

Himachal passed its law in 2019, repealing the Himachal Pradesh Freedom of Religion Act, 2006. While the 2019 law has added provisions related to conversions for the purpose of marriage, the aspect of prior declaration before the district magistrate existed in the 2006 law as well. Incidentally, the High Court had struck down the prior notice provisions as unconstitutional and violative of the fundamental right to privacy.