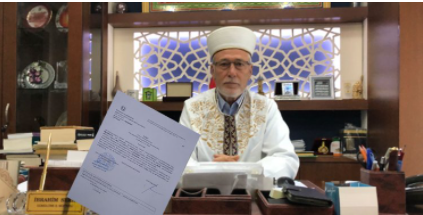 ABTTF (03.09.2021) – https://bit.ly/2XQ2OYn – ABTTF President: ‘The fact that the mufti elected by our community is brought before the court on charges of usurpation of office is actually a means of the policy of fear and intimidation against our community, we all know that’.

Elected Mufti of Rodopi Ibrahim Şerif will stand trial at the Thessaloniki Court of First Instance on charges of usurpation of office as part of an investigation into his participation in a mass circumcision ceremony for children belonging to the Turkish community in Western Thrace in Komotini’s (Gümülcine) Alankuyu neighbourhood in 2016.

Regarding the case to be discussed on 7 October  2021, Mufti Ibrahim Şerif indicated the following on his social media account: ‘We have been invited to the Thessaloniki Court of First Instance on 7-10 October 2021 to stand trial as regards our participation to the mass circumcision organised by our brothers from Alankuyu on grounds of usurpation of office’.

Halit Habip Oğlu, President of the Federation of Western Thrace Turks in Europe (ABTTF) made the following statement: ‘The fact that our Elected Mufti of Rodopi Ibrahim Şerif has been brought to court as a result of his participation to the mass circumcision ceremony in Alankuyu in 2016 on grounds of alleged usurpation of office is against freedom of religion or belief. Indeed, our Mufti was repeatedly called to testify on the orders of the prosecutor’s office under various pretexts in 2017, one of the investigations opened was related to his participation in the mass circumcision ceremony in Alankuyu in 2016. In addition to the fact that the state has taken away our right to choose our own religious leaders in violation of the 1913 Treaty of Athens and the 1923 Treaty of Lausanne, the summoning and trial of the mufti elected by our community as part of the investigation into the usurpation of office is actually a means of the policy of fear and intimidation against our community, we all know this. As ABTTF, we have repeatedly stated this at the international level, and we will continue to do so. We stand with our mufti Ibrahim Şerif, and we will continue our efforts at the international level as we follow the case’.

Further reading about FORB in Greece on HRWF website