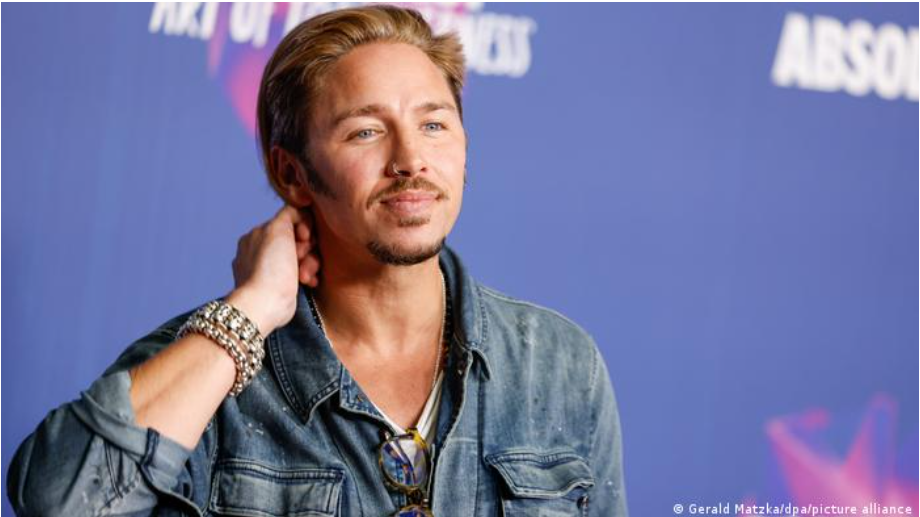 When German musician Gil Ofarim arrived at a hotel in Leipzig, he says he was told to put away his Star of David necklace or he would not be allowed to check in. Hundreds of people came out to protest in solidarity.

DW (05.10.2021) – https://bit.ly/3AeRHW5 – A hotel in the eastern German city of Leipzig was facing accusations of antisemitism on Tuesday after a musician said he was denied service for wearing a Star of David.

The video sparked sharp criticism from Germany’s Jewish communities and drew the attention of police.

In a video posted on social media, German musician Gil Ofarim said he attempted to check in to the Hotel Westin in Leipzig on Monday evening. Ofarim, who is Jewish, was wearing a necklace with a Star of David pendant.

Due to technical issues with the hotel’s computers, a long line had formed at the reception. Ofarim noticed that others in the line were waved forward, but he was not called up.

“What’s going on? Why is everyone else being called up ahead of me?” Ofarim says he asked the worker behind the desk.

The hotel employee then told him they were trying to reduce the line, but did not acknowledge that Ofarim was also standing in line.

“Then someone called out from the corner: ‘Put your star away,'” the singer says.

Ofarim said that the hotel worker then repeated the call for Ofarim to remove or hide his Star of David, saying that “once you put it away, then you can check in.” A visibly upset Ofarim ends the video with the words: “Germany, 2021.”

Leipzig police told DW they were alerted to Ofarim’s video and were currently processing it.

“We were informed by our social media team about the case,” police spokesperson Theresa Leverenz told DW.

“We have secured the video and are preparing to send it to prosecutors for consideration,” she added.

Authorities did not comment on whether any criminal charges have been filed, saying the case was in its early stages.

How has the hotel responded?

A spokesperson for the Westin Leipzig told news agency dpa that the hotel was deeply concerned and was taking the case “extremely seriously.”

The hotel’s parent company has tried to reach out to the singer to understand what happened. The spokesperson also emphasized that the hotel’s goal was to treat guests and employees with respect, regardless of their religion.

The incident described in Ofarim’s video prompted a wave of shocked responses on social media.

On Tuesday evening, hundreds of protesters in Leipzig gathered in front of the hotel to demonstrate against antisemitism.

At least 600 people were in attendance, according to local newspaper Leipziger Zeitung. Hotel employees also stood near the entrance, holding up a banner in what appeared to be a show of solidarity.

“The antisemitic hostility against Gil Ofarim is appalling,” Josef Schuster, the president of Germany’s Central Council of Jews, said in a statement posted on Twitter.

He said he hoped the Westin would take action against those involved and hoped that Jewish people in Germany “will be met with solidarity in the future whenever we are attacked.”

Who is Gil Ofarim?

The 39-year-old is the son of Israeli star musician Abi Ofarim.

Himself a singer and songwriter, Ofarim has played in two rock bands and has released music in German and in English.

In 2017, he won “Let’s Dance,” the German version of the celebrity ballroom dancing show Dancing with the Stars or Strictly Come Dancing, and has also acted in several TV shows and done voiceover work for dubbed films.

Correction: This story was updated to remove a sentence that said Ofarim did not name the hotel in the Facebook video he posted; Ofarim did mention the Westin hotel in the video.