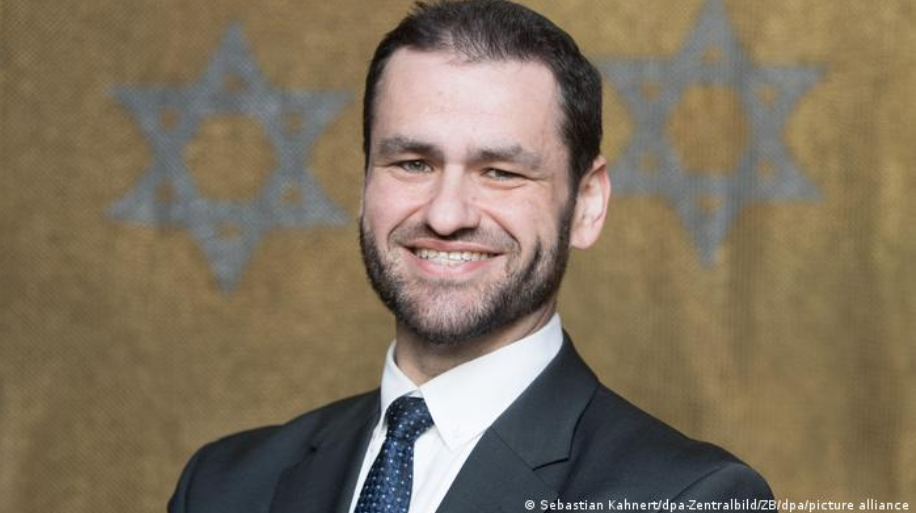 At a time of frequent reports of right-wing extremism within the military and rising antisemitism in German society, the reestablishment of Jewish military chaplaincy is a clear statement, 76 years after the end of WWII.

DW (21.06.2021) – https://bit.ly/2TRgznA – Forty-two-year-old Zsolt Balla is one of Germany’s most prominent rabbis. He has been a member of the Orthodox Rabbinical Conference of Germany for nine years, and the leading rabbi of the eastern state of Saxony for two.

“It is our goal to make it normal again for Jewish citizens to serve in the German army,” he said on the occasion of his appointment.

Field rabbis in World War I

The installation of a Jewish chaplain in the military marks a significant day for Germany and its Jewish community. Balla is not by any means the first German military rabbi. When World War I broke out in July 1914, some 12,000 Jewish Germans volunteered to serve in the military. Establishing a Jewish military chaplaincy became important in view of the large number of Jewish front-line soldiers. So, by September 1914, the first rabbis were introduced as chaplains.

The best-known Jewish field chaplain — one of nearly 30 in wartime — was the scholar and theologian Leo Baeck (1873-1956). Now considered the most prominent 20th-century German rabbi, Baeck survived the Theresienstadt concentration camp and later settled in London, where he served as the chairman of the World Union for Progressive Judaism.

But the Jewish military chaplaincy that Baeck and others carried out would be eliminated in the two decades that followed World War I as the Nazis came to power. Hitler reorganized the country’s armed forces into the newly formed Wehrmacht and dismissed all Jews from the military, including the Jewish chaplains, as part of the Nazi persecution of Jewish people across all aspects of society. The Wehrmacht was disbanded in 1945 after the end of WWII.

Nine decades on, the renewed creation of Jewish chaplaincy is seen as a milestone for Germany’s modern armed forces, the Bundeswehr, which was created in 1955.

A state treaty introducing chaplaincy for Jewish soldiers was signed by the German government and the Central Council of Jews in Germany in December 2019.

“That this is possible and becoming a reality after the inconceivable crimes committed by Germany makes me humble and grateful,” Defense Minister Annegret Kramp-Karrenbauer said at its signing.

The rabbinical appointment comes at a time when the German army has been in the headlines because of radical right-wing extremism in its ranks. The defense minister spoke Monday at a synagogue in Leipzig, saying that the Jewish military chaplaincy will join the Protestant and Catholic chaplaincies in offering “important support for our soldiers.” The Bundeswehr also announced in 2019 that it intends to recruit Muslim chaplains.

Kramp-Karrenbauer called the appointment “a great sign of trust” and added that “in view of our history, is also a cause for humility.” At the same time, she said, the installation of a military rabbinate indicates “a great commitment to our democracy, for our open, diverse and tolerant society.”

In recent years, Germany’s armed forces have repeatedly come under fire over suspicions that some members have far-right sympathies. In 2018, then-Defense Minister Ursula von der Leyen ordered the military to purge all links to the wartime Wehrmacht when it emerged that Nazi-era army memorabilia was openly displayed at one of its barracks. Since then, her successor Kramp-Karrenbauer has vowed to take decisive action against cases of radicalism in the security forces after a string of scandals over far-right networks in the police and military.

At the synagogue on Monday, the president of the Central Council of Jews in Germany, Josef Schuster, drew a distinction between Germany’s modern armed forces and the Nazi-era military. “The Bundeswehr has nothing in common with the former Wehrmacht, and that is the only reason why it is possible today for us to introduce a federal military rabbi,” he said.

Balla, who now takes on the title of “federal military rabbi” in addition to his other rabbinical work, hopes in any case that his being in the role contributes to the normality of Jewish life in all aspects of German society. He knows from his experience in youth work “that there are young Jews who can envisage a career as a soldier,” he said in an interview with the Jüdische Allgemeine newspaper. “We hope that here in Germany, despite the country’s history, it will eventually become normal for Jews to take this career path.”

Born in Budapest in 1979, Balla is the son of a lieutenant colonel in the Hungarian People’s Army. “I learned from my father to respect the work of soldiers very much,” he says. It is important to him that as a part-time military rabbi, he and 10 other clergypeople — liberal or Orthodox — are not only responsible for accompanying Jewish servicemen and women.

This is not about religious instruction, but about the ethical foundations of soldierly action, Balla said. “It is another important task for us rabbis to also take preventive action against antisemitism among all soldiers. There is a lot to do in this respect,” he says. It must be clear, he adds, “that the Bundeswehr is a place where people are committed to democratic values.”

A clear statement in an important year

The father of three is no stranger to trailblazing. When he was ordained as an Orthodox rabbi in Munich in 2009, Balla was one of the first Orthodox rabbis who had been trained in Germany since 1938.

Monday’s event in the small Leipzig synagogue is intended as a clear statement that Jews have a place everywhere in German society.