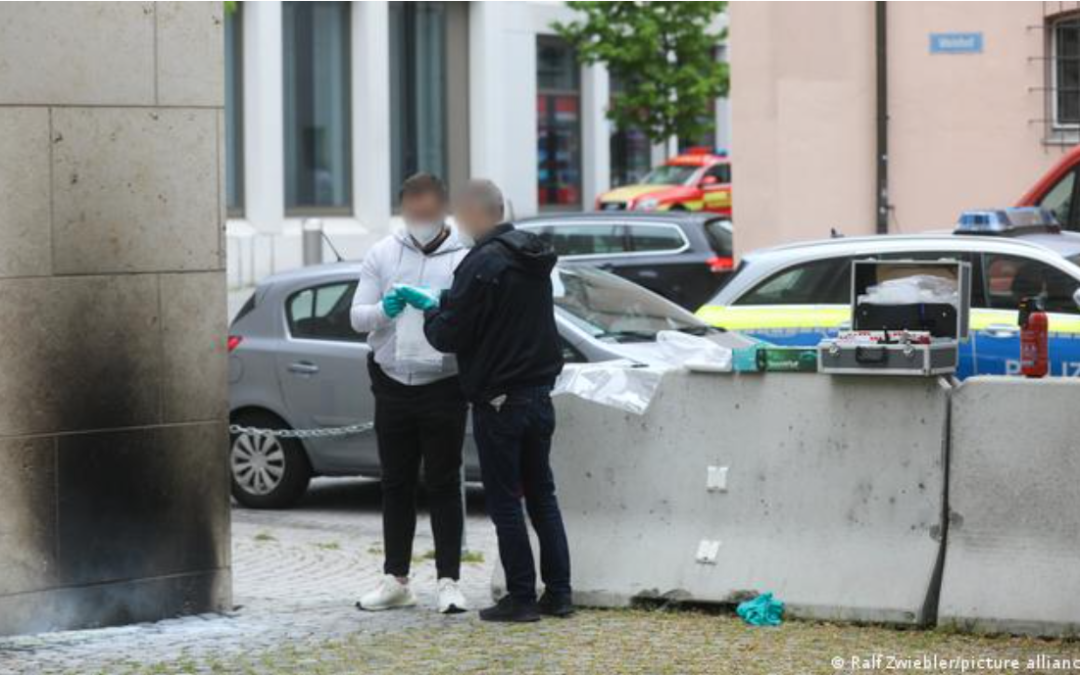 A masked man was seen pouring liquid on the synagogue’s exterior wall, which was then set alight. The attack in the southern city of Ulm has been slammed as “vile.”

DW (05.06.21) – https://bit.ly/2T2OGbA – Police in the German state of Baden-Württemberg said fire crews called by the witness promptly extinguished the incendiary fluid that left the synagogue’s facade covered in soot and damaged a pane of glass.

“It shows the insidious face of antisemitism, which we oppose clearly and unambiguously, ” said Kretschmann.

Anyone who tried to set fire to a Jewish place of worship would be “met with the full the full force of the law,” insisted Strobl, a senior member of Chancellor Angela Merkel’s Christian Democrats (CDU), who govern with the Greens in the southwestern state.

Kretschmann’s bureau said Baden-Württemberg’s Office of Criminal Investigation (LKA) had sent cybercrime and forensic experts to Ulm, a university city of 125,000 on the Danube River bordering Bavaria, some 90 kilometers (55 miles) from Stuttgart.

Consultations were taking place with Jewish community members in Ulm, where security had been “ramped up” and risk assessments made for Jewish facilities in other parts of the state, added Kretschmann’s chancellery.

Ulm’s synagogue, which opened in 2012, stands near the site of its old house of worship that was gutted by Nazi German paramilitaries on Pogrom Night of November 1938 and later demolished by the city’s Nazi-era administration.

At that 2012 opening, Kretschmann said German society must never again fail the Jewish people, and the model of cooperation between state and religion must be fostered and cultivated.

Saturday’s arson attack precedes a regional election Sunday in Germany’s eastern state of Saxony-Anhalt, whose city of Halle was the scene of a synagogue attack in October 2019 that ended in two deaths.

A lone gunman attempted to blast his way into Halle’s synagogue, where, inside, 51 people were observing Yom Kippur, the holiest day in the Jewish calendar.

His arsenal failed to breach its locked outer gates. He shot dead two other people — a 40-year-old woman passerby and a 20-year-old painter eating his lunch in a nearby kebab shop.

Photo : Cybercrime and forensic experts have been sent to Ulm-ipj/mm (epd, dpa, AFP)