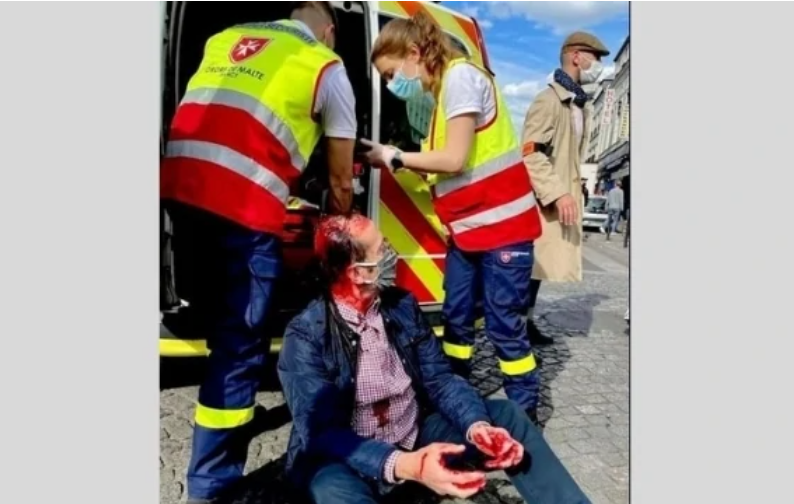 Last weekend, “anti-fascists” assaulted participants in an official Catholic event honoring the ten priests and the others killed by the Communards.

Bitter Winter ( 02.06.2021) – https://bit.ly/3yZgNZG – On May 26, 1871, the Paris Commune, the Socialist insurrection that came to control France’s capital, was about to be crushed. The Communards decided to kill their opponents they had jailed and were keeping as hostages. 50 were executed in Paris’ Rue Haxo: ten priests, detained because of the Commune’s anticlericalism, 36 police officers, and four revolutionary militants suspected of being spies.

150 years thereafter, the Vatican is about to beatify five of the priests (the final approval by a consultative commission came on May 11). A parish church, Our Lady of the Hostages, was built where the victims were killed. It was among the organizers of a procession to commemorate the martyrs and other events between May 26 and 30. In turn, those who still cherish the memory of the Commune were celebrating the victims killed during the bloody repression that followed its fall.

The procession and the other events were by no means organized by marginal or arch-conservative Catholics. They were an official event of Paris’ Catholic Church, with the participation of the Auxiliary Bishop, Mgr. Denis Jachiet. The Archbishop of Paris, Mgr. Michel Aupetit, concluded the events by celebrating the Mass on May 30 at Our Lady of the Hostages. Pope Francis himself had granted a plenary indulgence to participants.

By then, he had to start his sermon by condemning the “hate action” against the procession of May 29.

The pro-Commune manifestation had ended several hours before, and it was not near the procession’s route. Yet, in Boulevard de Ménilmontant, the Catholic procession was attacked by “anti-fascist” militants who threw stones and tried to physically stop the Catholics from reaching Our Lady of the Hostages. In this, they succeeded. The number of police officers present was not enough. They succeeded in avoiding worse violence, but Bishop Jachiet agreed that the procession had to be disbanded to prevent further violence. See https://twitter.com/i/status/1398699250129805315

The “antifas” insisted in their press release that this was a manifestation of “archconservative Catholics” (catholiques intégristes). It would not have been a good excuse for violence, but the designation was wrong. It was a mainline Catholic activity, sponsored by the Archdiocese, with the presence of the Auxiliary Bishop, within the context of events concluded by the Archbishop.

The Catholic Church had clarified that celebrating the martyrs had not a political meaning and was not even a statement “against the Commune.” The Church just wanted to honor good, charitable priests, who were killed just for being priests.

The mild reaction by Paris’ authorities against a clear instance of a violent attack on religious liberty is perhaps the most interesting feature of the whole incident. It confirms that these are not good days for religion in general in France.

Photo: A participant in the procession wounded by the “antifas” assisted by Order of Malta voluntaries. From Twitter.