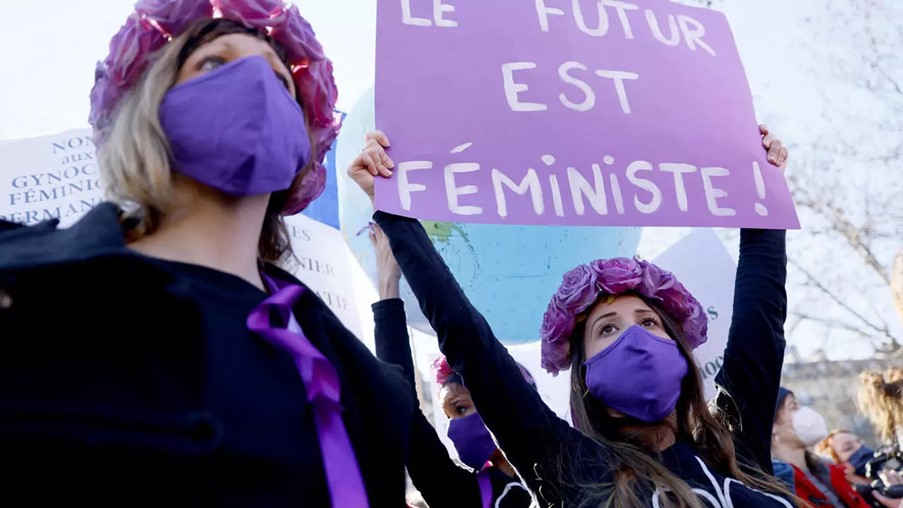 France 24 (05.05.2021) – https://bit.ly/3h3wubX – A 31-year-old French mother of three was burned alive by her husband, who chased her down the street and shot her in the legs before dousing her in a flammable liquid and setting her alight, police said Wednesday.

The grisly attack took place in broad daylight Tuesday in the well heeled  Merignac neighbourhood, near Bordeaux airport, in the southwest.

The woman and the 44-year-old man were separated. Their children aged three, seven and 11 lived with their mother.

The man fired several shots at the woman as she fled down a street, hitting her in the legs. After she collapsed, he set her alight, police said.

He was arrested half an hour after the murder in the neighbouring district of Pessac, armed with a pistol, a pellet gun and a cartridge belt, the Bordeaux prosecutor’s office said.

He is suspected both of his wife’s murder and of having started fire that damaged her home.

Local authorities have set up a counselling service for witnesses to the killing.

The couple’s children were not at home at the time of the attack, the prosecutor’s office said, adding that they were receiving trauma counselling.

The issue of domestic violence and killings sparked protests in France in 2019. Campaigners complained that women who attempted to report abusive partners to the police were often being turned away.

That year saw 146 women reported killed by a spouse or partner, a 21-percent increase on the previous year.

After an outcry, the government introduced the use of electronic bracelets to alert victims when their attackers are nearby.

On 6 May, the Prosecutor in charge of the case met with the press and released a number of additional details.

The victim is identified as Chahinez D. She was 13 years younger than her husband, her assassin. They first met in Algeria and she came to France in 2015. One year later she gave birth to a child. She already had two children, born in Algeria.

The murderer, Mounir B., was born in Algeria in 1976. He has double citizenship, Algerian and French. During a first marriage, he got three children now aged 20, 18 and 11 years. He divorced in 2015. He has had a regular job as a mason for 20 years. He has a criminal record with seven condemnations, including the last one for domestic violence against Chahinez D. in 2020. He was then sentenced to 18 months in prison, nine of which were suspended, and after six months, he was released for good behaviour during his detention.

They were officially separated and when he was released, he was not allowed to approach her any more. However, he did not respect this prohibition on several occasions. When summoned by some judicial authorities, he recognized these breaches of the agreement but remained unpunished and was not obliged to wear an electronic bracelet.

The Prosecutor specified that the family of the murderer did not want his name to be released publicly because they had already received threats on social media.