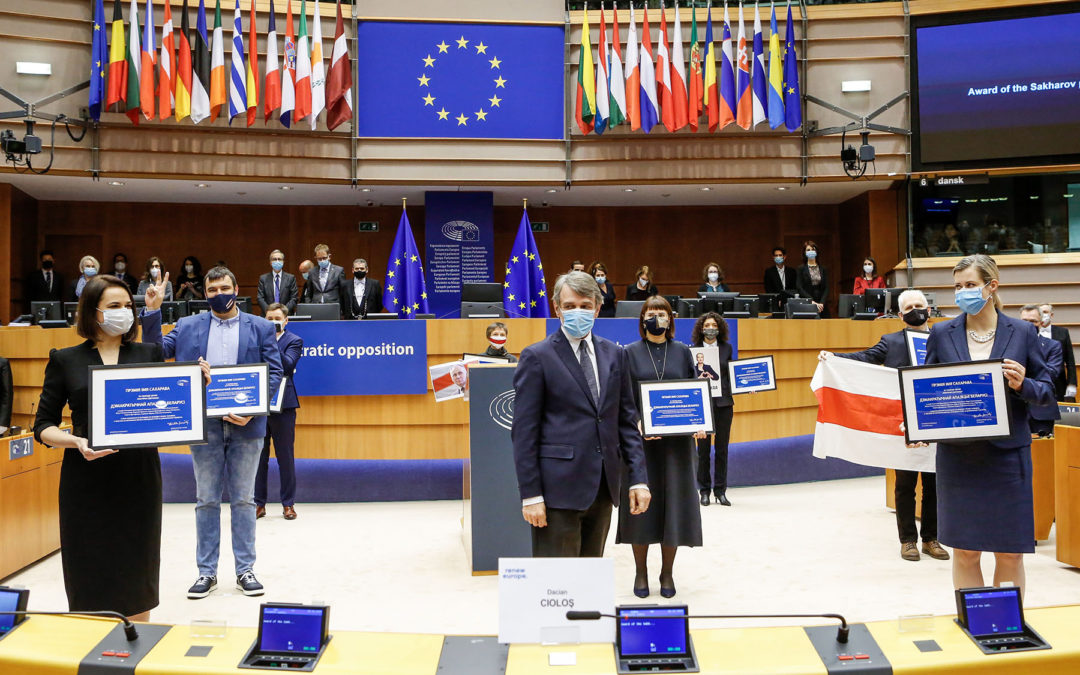 EU Reporter (29.09.2021) – https://bit.ly/3D2hV06 – Each year, the Parliament awards the Sakharov Prize to honour exceptional individuals and organizations defending human rights and fundamental freedoms. In 2020, the prize went to the Belarussian opposition for defending democracy in the country.

Nominations can be made by political groups and groups of at least 40 MEPs. This year’s nominations were presented in a joint meeting of the foreign affairs and development committees and the human rights subcommittee in Brussels on 27 September 2021. They are:

Alexei Navalny, nominated by the EPP and Renew Europe for his courage in fighting for freedom, democracy and human rights, is a Russian opposition politician, anti-corruption activist and major political opponent of the country’s president Vladimir Putin. Known through his LiveJournal blog, YouTube and Twitter, where he has millions of followers he came to international prominence by organising demonstrations, running for office and advocating reforms against corruption in Russia, Putin and his government. In August 2020, while on a trip to Siberia, he was poisoned. He spent months recovering in Berlin, but returned to Moscow in January 2021 where he was arrested. In February he was sentenced to 2½ years in prison. Now incarcerated in a high-security penal colony, he went on a 23-day hunger strike in April to protest the lack of medical care. In June 2021, a Russian court banned Navalny’s regional offices and his Anti-Corruption Foundation.

Afghan women, nominated by S&D and the Greens/EFA for their brave fight for equality and human rights. Under the previous Taliban regime, women experienced forced marriage, high maternity mortality, low literacy, forced virginity tests and couldn’t travel without a male. Following the Taliban’s return to power, women are again excluded from government and education and their rights and freedoms are threatened. The women included in the nomination are:

Jeanine Áñez, nominated by the ECR, is a Bolivian politician and symbol of repression against dissidents and deprivation of due process and rule of law in Latin America. She became interim president in November 2019, after alleged electoral fraud by incumbent Evo Morales. In November 2020, after free and fair elections there was a peaceful transfer of power. However, on 13 March 2021 she was arrested on charges of “terrorism, sedition and conspiracy”. Accused of plotting a coup d’état against Morales, she has been imprisoned ever since.

Sultana Khaya, nominated by The Left, is a Sahrawi activist and human rights defender based in the Western Sahara, promoting the right to self-determination for the Sahrawi people. She is the president of the organisation League for the Defence of Human Rights and against Plunder of Natural Resources in Boujdour/Western Sahara and member of the Saharawi Organ against the Moroccan Occupation (ISACOM). She has been under de facto house arrest without a warrant since 19 November 2020. Since 2005, she has suffered physical attacks, death threats, torture and sexual assaults. Over the last year, the Moroccan authorities have intensified repression against Saharawi activists and journalists, who are subjected to ill-treatment, arbitrary arrests and harassment in order to silence or punish them for non-violent action against the occupation of Western Sahara. On 1 July 2021, the UN Special Rapporteur on Human Rights Defenders Mary Lawlor strongly condemned the reprisals against Sultana Khaya.

Global Witness, nominated by Marie Toussaint and other 42 MEPs, is a UK-based NGO, which for more than 25 years has investigated and exposed environmental and human rights abuses in the oil, gas, mining and timber sectors, tracking money and influence through the global financial and political system. Nowadays, it also focuses on the issue of the climate emergency, attacks on public space and civic freedoms and the protection of environmental defenders throughout the world. Since 2011, Global Witness and its 22 local partners have addressed abuses of power to protect human rights, verifying and publishing each year the number of defenders killed worldwide.

The annual Sakharov Prize for Freedom of Thought has been awarded to individuals and organizations defending human rights and fundamental freedoms since 1988. It is named in honour of Soviet physicist and political dissident Andrei Sakharov and the prize money is €50,000.