ETHIOPIA: In the shadow of the elections, Amharas are massacred in silence 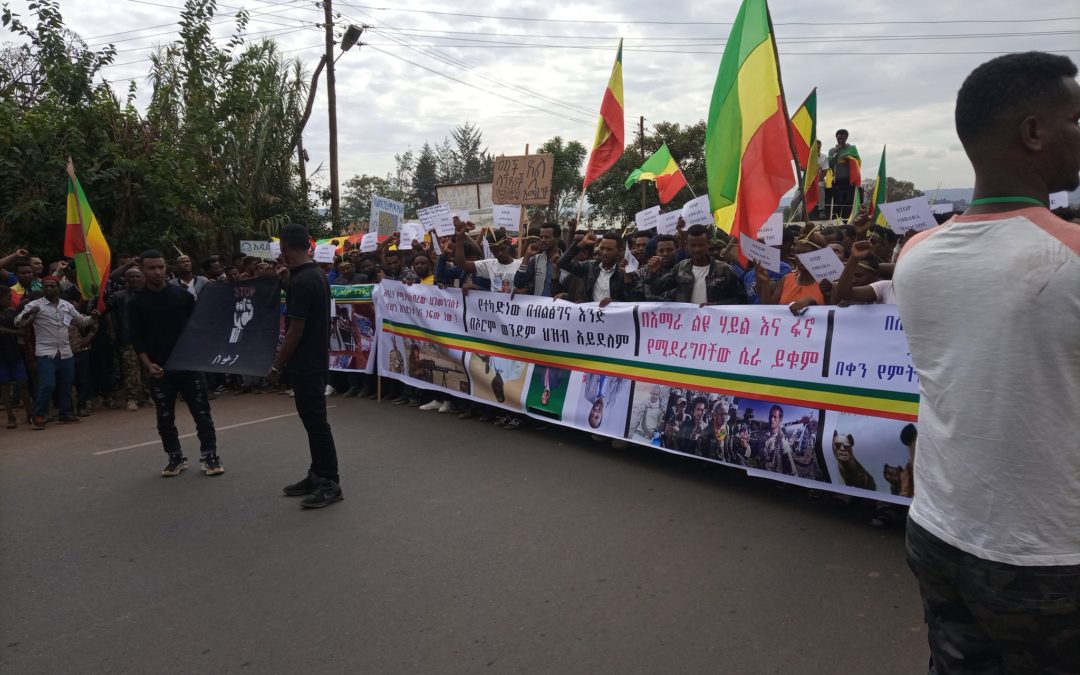 Ethiopia: In the shadow of the elections, Amharas are massacred in silence

The European Times (21.06.2021) – https://bit.ly/3cXcUvb – In the shadow of the national and regional elections and behind the smokescreen of the Tigray conflict, Amharas are victims of repeated massacres in total silence and impunity, several Amharas said at a press conference held on 16 June at the Press Club in Brussels.

Quite a number of such incidents already took place well before the war between the federal and the Tigray regional governments started but failed to sufficiently mobilize the international community. Examples:

In November 2019, 18 Amhara students – 14 young women and 4 young men – from Dembi Dollo University in Kelam Wellega Zone of the Oromia Region were abducted by unidentified people as they fled by bus a fatal ethnic-based attack on Amhara university students. They’re still missing, and we can fear the worst. This stoked anger at the federal government over its inaction and lack of transparency.

Ethnic violence including rape then affected more than 20 other university campuses in 2019 in the Oromia region and continued in 2020 prompting an estimated 35,000 students to flee.

In early November 2020, at least 100 people from the Amhara ethnic group were killed in an attack by suspected members of the Oromo Liberation Front (OLF) group.

The attack on Gawa Qanqa village in Guliso District of West Wellega Zone took place just a day after Ethiopian Defense Forces troops surprisingly, unexpectedly & without explanation withdrew from the area. This abrupt withdrawal has raised several questions that have remained unanswered by the government. Witnesses said dozens of men, women and children were killed, property looted and what the militants could not carry away, was set on fire.

In the last few months, a spate of deadly attacks particularly targeted civilians of ethnic Amharas.

On 25 February 2021, at least 12 people, including a seven-year-old child, were hacked to death in two particularly brutal attacks in the villages of Boka and Nechlu, in the eastern part of Oromia, multiple sources told Al Jazeera.

On 6 and 9 March, 42 people were killed in two separate attacks that targeted Amhara civilians in Oromia’s Horo Guduru Wellega zone, according to Ethiopian state media.

On 31 March, gunmen killed at least 30 civilians in an attack on a village in the West Wellega Zone of Oromia. The victims were ethnic Amharas. A resident of the Babo-Gembel district where the attack took place told AFP news agency that gunmen arrived after 9pm, forced residents to gather outside in a group and shot them dead. The place had no security cover from government security forces at the time.

On 16 April, Ataye and surrounding towns in the Amhara Region were destroyed resulting in 300 deaths and 256,000 people becoming homeless.

On 30 April, an armed group identified as the OLA (Oromo Liberation Army) attacked a transport bus traveling from Bure to Nekemte. The attackers rerouted the bus towards the Abay river gorge, took the passengers out and killed 15 of them.

Tewodrose Tirfe, chairman of the Amhara Association of America based in Washington DC, said “in the month of March well over 300 Amharas, including women and children, have been massacred by the OLA”. He also accused the government of being silent and inactive on killings.

Amhara victims frequently testify the massacres on fighters belonging to the Oromo Liberation Army (OLA) and regional special forces that are well armed and coordinated.

Societal violence is now undoubtedly on the rise. President of the Genocide Prevention in Ethiopia (GPE) Dr. Senait Senay says, “From 2 September 2020 to May 2021 alone, 2024 ethnic Amharas were targeted and horrifically killed and 2 million displaced in different regions of Ethiopia”, mainly in the Benishangul-Gumuz & Oromia regions. The list also includes over 1000 ethnic Amharas that were murdered in Maikadra by a retreating pro-TPLF militia, a few days after the war between the federal government of Ethiopia and the regional Tigrayan forces broke out, as Amnesty International has reported.

The successive federal governments of Ethiopia since the Ethiopian People’s Revolutionary Democratic Front (EPRDF) assumed power in 1991, Ethiopia was transformed to nine new regional states designed according to Article 46 of the 1995 constitution, but the borders of the new regional states crisscrossed former administrative delineations and were simply imposed without popular consent through a referendum or election. The result was Ethiopian citizens were ethnically identified on government issued residence IDs.

The elections in Ethiopia will not be held in 102 of the 547 constituencies, including the 38 constituencies of Tigray due to war, but also in parts of Benishangul-Gumuz, Oromia and Amhara regions, due to the massacres and massive displacement of Amharas.

In the meantime, the EU has withdrawn its Electoral Observation Mission accusing the Ethiopian authorities of not giving assurances on the independence of the mission. After the election, the EU should increase the implementation of its peace-making policies & humanitarian aid in Ethiopia and urge the “new federal government” to address the structural sources of the targeted ethnic attacks, the Amharas said at the Press Club in Brussels.