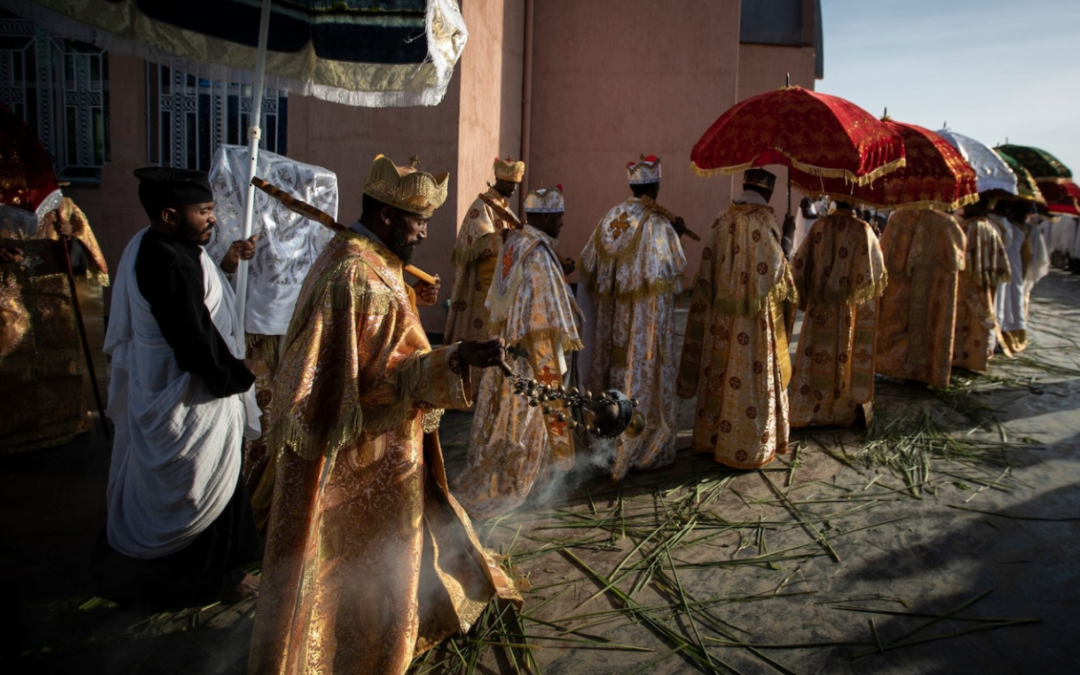 The document, obtained exclusively by the Telegraph, claims a number of mass killings have taken place over the last five months

The letter, which was addressed to the Synod of the Ethiopian Orthodox Church, says that “priests, deacons, choristers, and monks” have been “massacred” over the last five months.

Half a dozen survivors confirmed the news to this newspaper and said that both Ethiopian national army soldiers and Eritrean troops went into their holy spaces across southeast Tigray and “shot them down”.

Ethiopia has been wracked by a horrific civil war since the Nobel Peace Prize winner Abiy Ahmed sent his national army into the mountainous northern region of Tigray to oust the powerful regional government there on November 4.

The news comes several days after a video was smuggled out of the country showing the head of Ethiopia’s Orthodox Church Abune Mathias condemning what he calls a ‘genocide’ being committed on the ethnic Tigrayan people by the Ethiopian state.

The conflict has released an almighty humanitarian crisis and neither priests nor religious sites have not been spared.

Centuries-old monasteries and mosques, including the 6th century Debre Damo monastery and Al-Nejashi, Africa’s first Mosque, have been looted and bombed by Eritrean troops who are allied to Ethiopia’s government in Addis Ababa.

The stamped letter was sent on April 15 and lists the number of clergymen killed over the past five months in the church administrations.

Priests who survived the killings told the Telegraph the number of dead clergymen could be much higher than 78.

Gergera Maryam, Adi’Zeban Karagiorgis, Kidanemihret Bosa, Taksa and the monastery of Da Abune Ayzgi are some of the churches where churchmen were massacred, according to witnesses.

Kahsay* and his deacon son Halfom* fled their homes to the nearby mountains of Seharti after receiving news that the Eritrean and Ethiopian troops were raiding churches.

Two days later, Halfom returned back to the church in their village to see if the situation had improved. “I begged my son not to go back. He promised me he would return. But he did not return. The Eritrean soldiers killed my son” says Kahsay, an old man. “I learned a week later the villagers picked up my son’s body. I did not attend his burial. He was only 25.”

In Ethiopian Orthodox tradition, many priests and deacons gather in churchyards to celebrate Saints’ Celebration days.

Three witnesses told the Telegraph that Ethiopian and Eritrean soldiers specifically target these celebration days to execute members of the church.

“In the afternoon of January 9, there were many of us in the church of Adi’Zeban Karagiorgis. We were there to celebrate the birth of the Virgin Mary,” one witness who asked to remain anonymous, said. “Suddenly, eight Ethiopian soldiers entered the churchyard. The soldiers picked 12 young deacons between the ages of 15 and 20. They took them out and shot them down,” he says.

Hadera*, an old priest, survived a massacre at the church of Gergera Da Mariam. He says there have been various killings and massacres since early December 2020.

The 76-year-old says he was praying on February 1 when 12 Ethiopian and Eritrean soldiers barged into the sacred room of the church.

“They entered the holy room with their shoes. They shouted over us saying; ‘You are our enemies because you have comforted and preached to the villagers that this shall pass. You should not have done that,” recounts Hadera.

“There were six priests in the room. They shot us all and left the church. My friends died. It is nothing short of a miracle I survived.”

The Telegraph approached Eritrea’s information minister, Yemane Gebremeskel and spokeswoman of the Ethiopian Prime Minister office Billene Seyoum for comment. Neither had replied at the time of going to press.