ETHIOPIA: Amhara voices of despair from East Wellega under TPLF and OLA 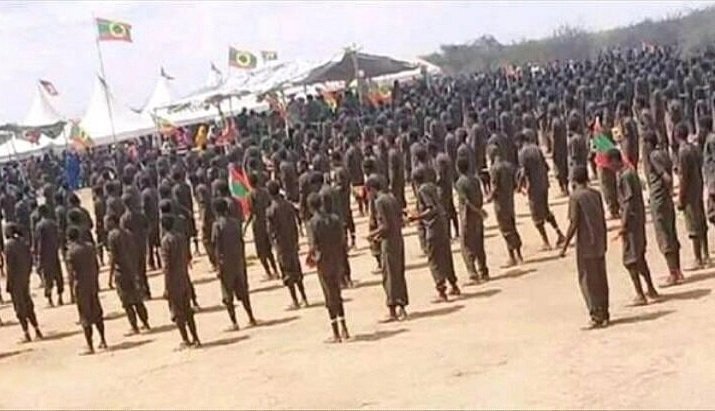 HRWF (08.11.2021) – On 4 November, the EU High Representative issued a declaration about the situation in Ethiopia in which he stressed that “the EU is particularly worried about the recent escalation of fighting in the Amhara region and the military advances of the TPLF and Oromo Liberation Army (OLA) as well as aerial bombardment by the Ethiopian Airforce of Mekelle, all of which risk dragging the country further into fragmentation and widespread armed conflict and worsening the situation of the population.”

Fighters from the Tigray People’s Liberation Front (TPLF) and their allies of the Oromo Liberation Army (OLA) are the main perpetrators of massacres of other ethnic groups, such as the Amharas.

Amharas are caught in the middle of the devastating conflict between the federal government in Addis Abeba and the Tigray Regional State which has spilled over into the Amhara Regional State and other regions. In the East Wellega zone of the Oromia Regional State, where they are in the minority, they are additionally attacked, killed and displaced by Oromos with the indirect or direct complicity of the local administration.

Recently, HRWF got the script of several audio messages received by Stop Amhara Genocide Association in Switzerland on 22 October 2021 from Amhara people crying for help since the massacres perpetrated in the East Wellega zone in mid-August and afterwards.

A cry of revolt

Witness: “We are fed up with the slaughtering of Amharas. Our lives matter less than animals. Just because we are of Amhara descent and because we speak Amharic? Why? Why is our people destroyed? Why? It is enough. They work hard every day to earn their living. How could pregnant women be murdered? Why are women murdered? Why are infants murdered? Why are they starving and are they cold? Why can’t they sleep in their houses? Why are their houses burnt? We appeal to the government to rescue us. Even if it is Allah that can create a better situation, the government has to do its part.  And the people who are hiding in the forests need to be rescued.”

Dead Amharas left unburied and as preys of dogs and vultures

Witness 1: “The bodies of the people who were killed in Wete (Wellega) have not been removed up to now. It has not been possible to bury them. Please find an urgent way out in order to protect the ones who are still alive, to also create an escape route for them and to be able to bury the dead.”

Witness  2: “I greet you, my Christian brothers and sisters. Let abundant peace be with you wherever you are. Our people and our families have fallen. Until recently, there were at least some people who could bury them, but now that there is no one who can bury them. Our dead have been left to be eaten by dogs and vultures. Please be their voices, don’t keep quiet. Do not just watch the information. I beg you to be their voices. Let us all come out and cry to be heard.”

Witness: “Greetings to all of you. People of Tigray origin are the ones who select and show their neighbours’ houses or other people’s houses to be burnt by OLA. These people of Tigray descent are living  in Oromia region. They organize the attacks with Oromo people to slaughter the Amharas. The government needs to urgently put an end to this massacre. We ask all of you to make sure that this call reaches high-ranking officials. Our people are dying.”

All communications networks down

Witness 1: “In the Horoguduru in Wellega, Abedingoru Wereda, the telephone and internet network have been shut down. People are unable to communicate. The roads have been blocked. Fighters shoot at Amharas to kill them. For the past two days, we have not been able to hear from them in Abedingoru Wereda.”

Witness 2: “The telephones are not working in Wellega, Wete. We do not even know where and in which conditions our brothers are. They are hiding in the forests. A mother has been separated from her child and she does not know where he is. We do not know if they are hungry, thirsty or cold. We are begging for justice, we want justice.”

Displaced and fleeing for their survival

Witness 1: “Greetings. Greetings dear Amhara people. Many people are displaced. The people did not worry about their hunger, their thirst and their poverty as their first priority is to survive. They thought they would survive if they left their houses. About 50 to 100 people have left from our place every day. They usually left during the night, walking through the forests and in the dark for their security. Those who got tired were left behind… They found themselves in very difficult conditions.”

Witness 2: “They were given one week only to leave the area. If they did not leave to wherever they needed to go within the week, they were told by the OLA fighters that they would come back to murder them. They told them that they would “spray” them with bullets and destroy them. The warning was given to the people from the Horo area including the rural area up to Dingoru town.  We don’t know what they did to them now because there are no more communications. We beg you to be our voices. Please make sure that our call gets the attention of the relevant authorities.”

“Hello, how are you? Are you fine? The case of East Wellega is not ending even though we talked about it a long time ago.  Haro Kebele is about 8 km away from Kiremu Wereda in East Wellega. On 10 October, there was an attack on the Amharas of the region. They were surrounded  from four directions and could not leave the area. Before the attack, the OLA militias first let the Oromos leave the area and made sure that only the Amharas were left behind. They then started the attack, which lasted until 14 October. For four days, there was heavy fighting and they did not receive any help from outside. There were many casualties, but some managed to survive by defending themselves.

I told you previously that it was at Kiremu Wereda that my brother died. Around 22 September, 18 of our neighbours were taken away during the night and killed. Their bodies were burnt. My brother tried to pick their mortal remains in order to bury them but he was also murdered.” (Testimony collected by HRWF currently in Zanzibar on 7 October)

Reaction and feelings of an Amhara in exile

“Those of us who are in exile, outside our country, are extremely heart-broken. Our families that we deeply care about are being killed. We miss them and we are anguished about them. In Wete all the houses and the crops were burnt to make any return impossible. The attackers also destroyed their money. Now our families are scattered around in the forests. Why is the government saying and doing nothing about it? Why?”